A Talk Jointly Presented by the Women’s, Gender, and Sexuality History Workshop and Pre‐modernist Workshop
at The Ohio State University
(co‐sponsor: Institute of Chinese Studies)

(View video of this event at the bottom of this page.) 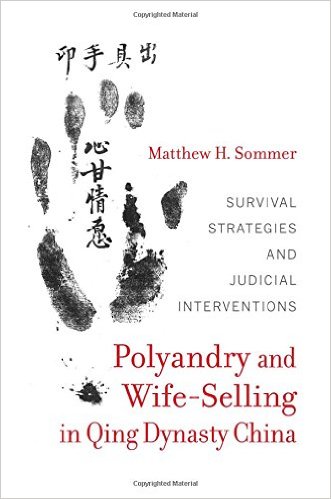 Matthew Sommer
Professor of Chinese History
Stanford University
Time: Sept. 11 (F), 2:00pm
Location: 168 Dulles Hall
In China during the Qing dynasty (1644-1912), polyandry and wife sale were widespread survival strategies practiced by the rural poor in conditions of overpopulation, shrinking farm sizes, and worsening sex ratios. Polyandry involved bringing in an outside, single male to help support a family in exchange for sharing the wife; wife sale involved the transfer of a woman from one husband to another, to become the latter's wife, in exchange for cash payment. These two practices represented opposite ends of a spectrum of strategies to mobilize the sexual and reproductive labor of women in order to supplement household incomes and maintain subsistence. If we take into account lived experience among the poor, no clear distinction can be drawn between marriage and the traffic in women in Qing China; similarly, the normative distinction between marriage and sex work that was basic to law and elite ideology cannot be sustained.
Bio of Speaker:
Matthew Sommer is Professor of Chinese History at Stanford University. His research focuses on sexuality, gender relations, chosen kinship, and law during the Qing dynasty (1644-1912) and the main sources for his work are legal cases from central and local archives in China. He also uses popular fiction and other non-legal sources for historical research. Professor Sommer’s first book, SEX, LAW, AND SOCIETY IN LATE IMPERIAL CHINA, is primarily a legal history, but more recent projects use legal cases to explore social historical topics as well. His second book, POLYANDRY AND WIFESELLING IN QING DYNASTY CHINA: SURVIVAL STRATEGIES AND JUDICIAL INTERVENTIONS, is coming out in Sept. 2015.