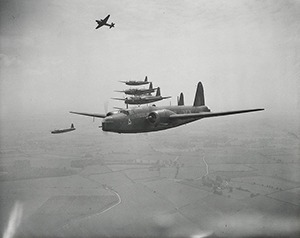 World War II, one the darkest periods in the history of the world, raged from 1939 to 1945 and involved almost the entire world. Countries were destroyed, created or changed forever. Fifty million people lost their lives between 1939 and 1945 and hundreds of millions more suffered injuries and wounds. Yet many today do not know when, where, or by whom the war was fought or that their fathers and grandfathers fought battles from the volcanic islands of the South Pacific Ocean to the icy waters of the North Atlantic; or from the jungles of Burma to the deserts of North Africa; or from the grassy steppes of Russia to the skies over Britain. We offer this overview of World War II in the hope that some may gain a better understanding and become interested in continuing to learn more. There is a lot to know about history's most widespread and destructive war, but there is no better place to start than eHistory's World War II area. (Image of World War II Wellington bombers, circa 1940,) (CC by 2.0)

For more information about World War II, search on Origins.osu.edu.