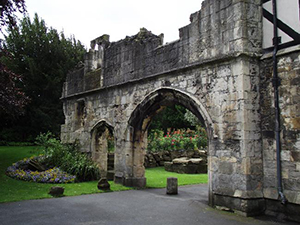 The United Kingdom has historically played a leading role in developing parliamentary democracy and in advancing literature and science. At its zenith in the 19th century, the British Empire stretched over one-fourth of the earth's surface. The first half of the 20th century saw the UK's strength seriously depleted in two world wars and the Irish republic withdraw from the union. The second half witnessed the dismantling of the Empire and the UK rebuilding itself into a modern and prosperous European nation. As one of five permanent members of the UN Security Council, a founding member of NATO, and of the Commonwealth, the UK pursues a global approach to foreign policy. The UK is also an active member of the EU, although it chose to remain outside the Economic and Monetary Union. The Scottish Parliament, the National Assembly for Wales, and the Northern Ireland Assembly were established in 1999. The latter was suspended until May 2007 due to wrangling over the peace process, but devolution was fully completed in March 2010.