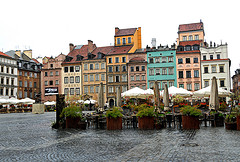 Poland is an ancient nation that was conceived near the middle of the 10th century. Its golden age occurred in the 16th century. During the following century, the strengthening of the gentry and internal disorders weakened the nation. In a series of agreements between 1772 and 1795, Russia, Prussia, and Austria partitioned Poland among themselves. Poland regained its independence in 1918 only to be overrun by Germany and the Soviet Union in World War II. It became a Soviet satellite state following the war, but its government was comparatively tolerant and progressive. Labor turmoil in 1980 led to the formation of the independent trade union "Solidarity" that over time became a political force and by 1990 had swept parliamentary elections and the presidency. A "shock therapy" program during the early 1990s enabled the country to transform its economy into one of the most robust in Central Europe, but Poland still faces the lingering challenges of high unemployment, underdeveloped and dilapidated infrastructure, and a poor rural underclass. Poland joined NATO in 1999 and the European Union in 2004. With its transformation to a democratic, market-oriented country largely completed, Poland is an increasingly active member of Euro-Atlantic organizations.