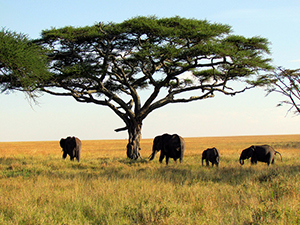 Africa is the second largest continent in the world. It covers six percent of the Earth's total surface area. Algeria is its largest country in terms of land, but Nigeria has the highest population. Evidence of the first humans was found in Ethiopia. They were thought to have lived about 200,000 years ago. (Image: Elephants - Serengeti National Park Safari, Tanzania, Africa by David Berkowitz, 2011.) (CC by 2.0)