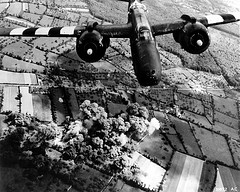 This is Lieutenant Commander Joseph H. Gibbons who was in command of Naval Combat Demolition Units in Force 'O' which attacked the eastern beaches of Normandy on June 6, 1944.

The Naval Combat Demolition Units were charged with the responsibility of clearing sixteen 50- yard gaps on the beaches assigned to that force. They worked in conjunction with the Army engineers who were charged with the responsibility of clearing the shoreward obstacles. Throughout the entire operation we worked very closely together and there was an understanding between Lieutenant Colonel O'Neil and myself that while the initial responsibility of clearing the seaward gaps was the Navy['s] and the shoreward gaps was the Army['s], that they would work just as American men fighting an overall objective and that if I got stuck he was going to help me and if he got stuck I would help him, and that as soon as the seaward gaps were blown we would join in helping the Army clear the shoreward gaps if that had not been accomplished.

After accomplishing our initial objective of sixteen 50-gaps we were then to proceed to clear all enemy obstacles off the beaches. It was expected that all enemy gunfire would be neutralized by H-hour [the time when the first wave of the Allied invasion force landed on D-day] when we were to land. The plan called for the Navy Combat Demolition Unit to land at H-hour plus three minutes. Unfortunately [enemy] gunfire was not neutralized and as we approached the beaches we were subjected to heavy enemy gunfire of 88 mm [artillery,] 75s [artillery,] 50 machine gun and rifle fire. In the engagement we suffered 41% casualties, 20% killed, 21% wounded. This excluded those who were wounded but were not evacuated from the beaches.

The gunfire was intense, but we were successful in clearing initially six gaps [of] 50 yards each and three semi-partially cleared gaps. By the end of D-day we had been successful in clearing 10 gaps completely. By D plus 2 day [two days after the initial Allied landings], 85% of the enemy obstacles on the beaches had been cleared and by D plus 4 the beaches on Omaha were cleared of all enemy obstacles dangerous to invasion craft.

Some of the unusual events which occurred was first the complete decimation of one crew which was killed by a direct hit of an 88 mm gun [German high-velocity anti-aircraft artillery which was also used effectively against land targets]. The boys went into the beaches carrying 40 pounds of specially prepared explosives. We carried in rubber boats 300 pounds of additional explosives. This particular unit had place their charges on the obstacles and in placing these charges, they were all hand placed. They were prepared to pull the fuse detonating the charges, when an 88 shell made a direct hit on one of the rubber boats exploding the auxiliary ammunition, the concussion therefrom set off the explosives on the obstacles which in turn killed all members of that crew with the exception of one man who had gone up the beach to place markers to guide in subsequent craft.

Another crew received a direct hit by [a German] 88 in the boat and were killed with the exception of [all] but two men. In another case an officer was standing by to pull the fuses after the charges had been placed when rifle fire cut his fingers off and the fuse assemblies. In still another instance enemy rifle fire set off the charges which had been placed on the obstacles which cleared the gap but unfortunately also caused casualties. One unit was decimated[,] with the exception of three men[,] by enemy sniper fire. Throughout the entire operation the loyalty and bravery and devotion to duty of the men were most outstanding. All of those who were killed died with their faces toward the enemy and as they moved forward to accomplish their objectives.

One gets rather fatalistic regarding operations of this nature, and to cite three different illustrations that cause one to believe that.

Three of my officers were walking down the beaches which were strewn with mines. They were walking in the ruts [tire tracks] of a truck. Twenty paces behind the last officer came a soldier. The three naval officers passed by[,] stepping in each others footprint, [but when] the soldier came by stepping in the footprints made by the last naval officer, [he] set off the mine and was blown to pieces.

In another instance, an officer was in the command post, which was [located in] a foxhole [a one or two-man fighting hole used for protection from enemy artillery and small arms fire] on the beach. Another officer approached him stating that he thought that particular position was dangerous for the evening, inasmuch as there was a road which had been cut through the sand dunes and which would probably be subjected to enemy gunfire during the night. The officer accosted at first declined to accept it as a dangerous position but subsequently informed the officer that if he could find a more secure place he would be willing to move there for the night. In front of this particular foxhole or command post were six trucks including ammunition trailers which had been stalled. When the officers moved out approximately five minutes later, enemy gunfire opened on these tracks setting them on fire and they burned and exploded all night long.

One officer had a sniper shooting at him for five minutes, without success but unfortunately he did hit the man adjacent to this officer, shooting him between the eyes.

On the enemy[-]placed obstacles on the beaches they [the Germans] had also placed teller mines. These were placed on approximately 75% on top of stakes, at the apex of ramps and at the top of the elements 'C' and in some cases in the center of hedgehogs [beach obstacles constructed of clusters of wooden or metal stakes sticking into the air at different angles]. In order to detonated those mines, it was decided that they should be detonated at the time the obstacle was destroyed in order to avoid having those mines blown into the beach unexploded to be a hazard later.

To accomplish that, it was necessary to place a charge alongside the mine to assure it being detonated when the obstacle was demolished. To accomplish this men shinnied up the stakes and stood on each others shoulders all in the face of heavy enemy gunfire.

As a result of the performance and the successful accomplishment of their mission of the Naval Combat Demolition Units of Force 'O' were awarded the Presidential Unit Citation [the highest U.S. unit award for combat action - equivalent to an individual award of the Medal of Honor]. This was awarded by the Secretary of the Navy in behalf of the President.