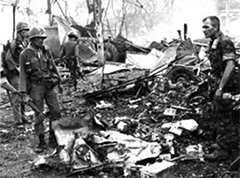 On 30 April 1968, I was Major Frank Breth, the S-3 Ops/0 of 3/9, who coordinated and ran the ops for 3/9 ( Bill La Montagne) from March 1968-September 1968. In August 1967 I joined 3/9 after they had come out of Operation Buffalo in the DMZ, and was assigned as CO of Mike Company.. went through Cam Lo, C-2 and the Con Thien adventure in Sept- Oct, until we were relieved by 1/9. I then was assigned to Hue as the Liaison officer from 3rd Mar Div to Ist ARVN Div. I went through the Battle for Hue and then returned to 3/9 as the S-3, replacing Ben Gardner and working for LaMontagne at the Rockpile, building LZ Stud.

John, before I go further on the DMZ, I have a very little known story about 3rd Mar Div tanks during the Battle for Hue, those tanks saved the day and were crewed by all young guys who did terrific work. That's a separate story which needs telling. If you are interested I'll write it up. Bill La Montagne and I were together on that one also in Feb -March '68.

On 30 April 1968, 3/9 in total was at the Rockpile with H&S, India, Kilo, Lima, and Mike. India was on the outposts.3/9 was in the 4th Marine Regiment sector, just west of the 9th Marines, who had the "Leatherneck square" sector. It was relatively quiet with LZ Stud becoming a major base, more convoys on route #9, with occasional shelling from Mutters Ridge and the mountains in the west ( 3/3 later captured the 75mm pack which now sits by the entrance at Marine Barracks, 8th and I, in DC). It was a routine day until about 2 PM when the 3rd Mar Div CG flew into the Rockpile and said he needed us to go into action in the 9th Marines zone. He mentioned that a platoon of 1/9 with some tanks had received heavy casualties east of Cam Lo. We scrambled in to our field gear, left India with H&S to secure the Rockpile. It seemed within minutes that CH-53s started shuttling us to a site just south of the base at Cam Lo. La Montagne, Tom Mix, myself, Ist Sgt Paddock and the command group went in first to coordinate with 1/9 and TF Robbie at Cam Lo. Lima came in next with Tom Scheib as CO, then Kilo, 81s, and Mike.

As I recall everyone was on the ground by 3:30, or so. I had spoken with the CO and "3" of 1/9 ( "Blackie" Cahill and Angie Fernandez)plus a rep from TF Robbie. Their info was sketchy and somewhat unsure of the total picture what had happened or what the enemy strength was. Our mission was to recover the platoon from 1/9 and get the tanks out. They had been out there 24-36 hours from what I recall. 1/9 had recently come out of Khe Sanh and apparently did not have all their companies available so we got the mission. The TF Robbie rep ( Major Bruce MacLaren) did have comms with the tanks and they said the NVA were all over and we better get there by nightfall. After getting the radio freqs, call signs out, for fire support, air and the 9th Marines we moved out about somewhere between 3:30-4pm. We went out in a spread out formation, companies in column with Lima leading, Kilo, the CP and! 81s and them Mike with a platoon of tanks. They had already ambushed the tanks so we kept our tanks back so we could fix the enemy and then run the tanks up when we needed them. When we left we had about 3-4 hours until dark. We asked for an AO and he was going to be on station in about 45 minutes to an hour. Since we didn't know that ground well enough, we needed his eyes. They got there but it was just after the NVA opened up on us, Lima company especially.

Looking at the map, Cam VU, where the tanks were pinned down just west of the village, was about 2,800 meters ( about 1 1/2 miles) across fairly level plain with waist high thick grass, lots of bushes. As we moved east to Cam Vu the ground was open at least 1,000 meters to the west. The entire battalion was in column, moving well. What we did not know is that an NVA regiment was waiting us. They had laid a trap knowing the Marines would rescue their own. Fortunately 3/9 had some very experienced troops and leaders at all levels who knew how the NVA operated in the DMZ.

About 45 minutes after we started Lima ran into a well dug -in and camouflaged units which had AK-47s , RPD machine guns and 60 mm mortars... an NVA battalion of about 300 soldiers. They opened up and with the initial volley they caused numerous casualties in Lima, one platoon and part of another was hurt pretty bad but they put up a heavy volume of fire in return and the NVA slowed, giving time to pull back most of the dead and wounded. I spoke with Tom Schieb in a matter of minutes and need help ASAP. The AO just arrived on station and reported what the NVA was doing to come around Lima and rap them. They ran fixed wing and nailed a large group. I told Gene Bryan, the CO of Kilo to move up quickly on Lima's ( Tom Scheib) left flank to cover him, La Montagne and the remainder of the command group to follow Kilo so we could organize Kilo and Lima together. Rich O'Neill, CO of Mike Company took the tanks and went further to the left ( North) to cut of any NVA who might be trying to come around behind us. I told La Montagne that Scheib need help ASAP so he took the command group, while I took two radio operators with me running to catch up to Scheib so I could run support
for him.

The three us "high-diddled" across this open terrain about 500-600 yards alone when all of a sudden a 200+ round artillery barrage fired from North Vietnam with 130mm guns landed behind Lima and just before my team about 50-60 yards. My team ducked down for about 2-3 minutes until it stopped. It was apparent that we had a large NVA unit to deal with and not some "rice farmers". These guys had fire support from the north and heavy machine guns, plus 82 mm mortars. This meant at least a regiment and they were trying to close the trap. My team and I ran about another 100 yards on a small path to close on Lima and all of a sudden came on a NVA machine gun crew loaded and pointed right at us. They were all dead...killed by their artillery strike which had just fired! Moments later we were with Lima and Tom Scheib. He was wounded and needed all the help he could get.! My team and I picked up the coordination, to the AOs, got air on station, adjusted artillery of the flanks, and briefed the Regiment "3" ( John Hopkins) as what we were dealing with. Keep in mind that 2/4 and 1/3 were fighting the NVA 325th Division about 6-8000 meters east of us. We were running into a large NVA force protecting the 325th's west flank!

While I with Scheib, we were receiving heavy small arms fire, RPGs and mortar fire. All of a sudden this fire stopped as I heard Kilo assaulting "on line" to our left flank( north) closing in on us. Their fire was terrific and they did one great job as they had cut down an NVA company trying to encircle Lima. Kilo quickly caught them off guard and "cleaned them up" and tied into us. This was about 6 pm. The air was humid, hot and still with no breeze. By this time the CP. and the 81s had arrived on scene and we began getting the casualties ready for med evacs. During this time we were mortared pretty heavy by 82 mm mortars. Which caused casualties and more wounds to those awaiting med evacs. The H-34 med evac birds flew from Dong Ha down route 9 then north to us at very low level to avoid the heavy NVA fire. The corpsmen from Kilo, Lima and H&S did absolutely ! incredible work collecting, stabilizing and medevacing the wounded. I clearly remember one of the medevac birds flying low at dusk about 50 feet with fire streaming out of the belly. We watched him sit down and pull everyone out before it exploded. Another bird was on him and collected them immediately. Our medevacs continued in to darkness. Not only were there Lima's and the CP casualties but also the dead and wounded of the 1/9 platoon and the immobilized tanks we recovered.

Concurrent to all this action "Mike" was making it's way with the tanks around to the left ( north) of us to cut off any NVA and close to us for the night. They uncovered a large NVA force ( estimated company) on their own and had a tough fight. The companies weapons and the tanks tore them apart. This company was apparently trying to come around our back and trap us but Mike and the 3rd Tanks caught them. Mike and the tanks closed on the battalion position just after dark. We started heavy artillery fires close to us and we received no assaults that night, only mortars which were not targeted near us. We had apparently hammered a large NVA force. Several years later I spoke with a USMC radio intercept officer who was listening to the NVA frequencies who told me they were screaming that we were "nailing them". Unfortunately, Lima company bore the brunt of the enemy attack but held together and did their share of putting the steel to the NVA. It is interesting that every company of 3/9 and the tanks were all involved in the action. That action was a credit to the tankers and the Marines of 3/9 as they did some great work handing "Charlie" his "lunch".

The next morning we were reinforced by a Delta, 1/9. We were to keep moving east to route #1, which was about 5-6000 meters to the east. We tightened up and went into Cam Vu, which was about 300 meters away. It was a small deserted village with about 8-10 grass hootches. I remember watching our preparatory fires on Cam Vu. A Tank fired at a hooch and I saw the grass come off as the round "bounced" off the grass hut! The NVA had built reinforced concrete pillboxes inside the grass huts. We found the "vill" , but had plenty more action as we proceeded east, then south, then west again over the next four days. That's another story...the action continued for 3 more tough days as we moved to clear the area just west of Route #1.