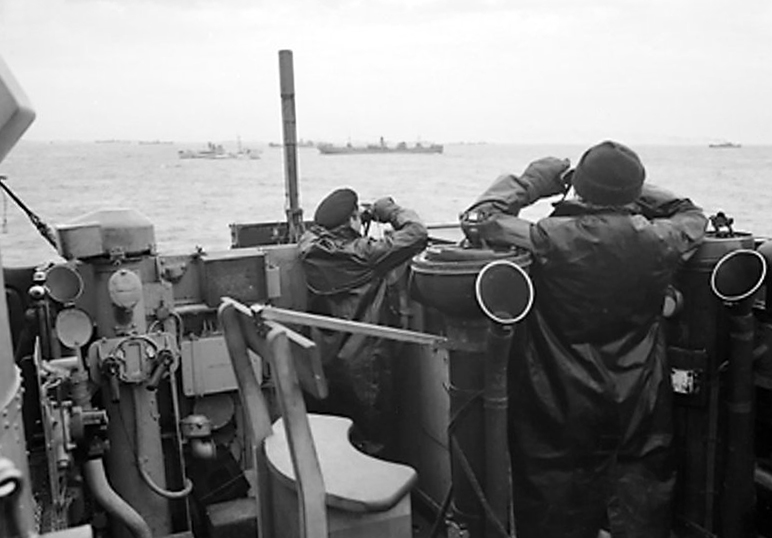 Recollections of Lieutenant Commander Dudley S. Knox, USNR, on destroyer escort USS Chatelain (DE-149), of the sinking of German submarines U-515 and U-68 off Madeira Island on 9 and 10 April 1944.

This is a talk on an action which took place in the North Atlantic on Easter Sunday. I'll give you some background before I go into that part of the story. I will give you a general idea of what we were doing. We were Task Group 21.12 operating as a so-called killer group. Our mission was to sink submarines and we attempted to stay at sea in the areas where the submarines were concentrating. With a CVE [escort aircraft carrier], the [USS] Guadalcanal [CVE-60], there were four escorts, all of which were DE's [destroyer escorts]. I believe this was the first time that DE's were used for this purpose.

The action on Easter Sunday started actually on the 8th in the evening when aircraft attacked a radar contact which proved to be a submarine and which crash dived. During the night, the USS Pope [DE-134] of the same group made sound contact and attacked three times and then lost contact. Later on in the morning of the ninth, I think approximately around 6 in the morning, another submarine was attacked which I think eventually proved to be the same submarine. He in turned crash dived and escorts were sent out to search the area.

The USS Pope was left to screen the carrier, and as she was steaming more or less away from the attack area she got sound contact. I believe it was on the starboard bow of the carrier, and later reports indicate that the Captain of the submarine, the U-515, had the Guadalcanal in his sights and he had planned a torpedo attack on her. However, when he heard the pinging [sonar] on him he instantly took evasive tactics. The Pope maintained contact all morning, and made repeated attacks.

About 12 o'clock in the day, about 1200, the Division Commander asked the Pope if she needed assistance. She stated that she did and the USS Chatelain [DE-149], the ship that I was on, was detached for the search and went to help. Our mission at that time was to maintain contact on the submarine which we got instantly on approaching the area. Now all we did for perhaps an hour was to lay off while the Pope continued her attacks by depth charge.

Finally the Pope lost contact and at the same time the Chatelain lost contact, and we commenced a search in the immediate area, with the rest of the escorts laying off perhaps three to six thousand yards. After sweeping the area for some time, the Chatelain regained contact and commenced her run. I happened to be on the flying bridge and the ASW [antisubmarine warfare] Officer had passed the word to stand by to fire depth charges when I saw a bow out of the water broad on our starboard beam, approximately 400 yards away, perhaps less. At that time, we were, of course, at general quarters and we commenced firing instantly. Our momentum was such that we circled across her bow and lay off about a thousand yards or less and fired all our guns. There was an attempt from the submarines' crew as they came out of the conning tower to man the 20 mm. [antiaircraft] guns right in the conning tower, but such a concentration of fire was made that they were soon cleaned off the conning tower.

We then noticed men spilling out of a hatch aft and diving into the water. We ceased firing and there was a period when we waited for them to abandon ship but nothing seemed to happen when four men, either four or five men ran forward to man her forward gun. Our 20 mm [antiaircraft guns] cut them down before they could get to the gun and we commenced firing with all the guns for the second time and she exploded. There seems to be some question of whether or not it was ready box ammunition that exploded. The fire seemed to come out of the hatch forward near the gun. We then ceased fire for the second time and the submarine sank, stern first.

After the submarine sank the USS Pope came in and assisted us in taking on survivors. Forty-three men were saved from the water, of which approximately seven were taken aboard the USS Chatelain, which included the Captain of the submarine. He stated his name to be Lieutenant Commander Heinkle [Korvettenkapitan Werner Henke], who it turned out was a very famous German submarine commander who had been decorated by Hitler himself. The survivors were, of course, very completely shocked, practically every survivor had his ear drums punctured and they were very dazed. They were, however, soon transferred to the carrier, where they got proper medical attention and we were all glad to say that they all recovered.

Also, a note of interest, there was no question of arrogance on the part of any of the people there. We asked the German Commander, the Captain, when he thought the war would end. He said, '1944.'

On the following morning, April 10th aircraft [from USS Guadalcanal] made radar contact approximately around 0600 in the morning. They attacked [German submarine U-68 near Madeira Island] and there was an explosion seen by the aircraft followed by a second explosion under the surface of the water. There was very reason to believe this was a kill, escorts were detached and arrived at the scene approximately two hours later. Floating in the water were four air flasks which were recovered. They looked very bright as though they had not been stowed on deck. There were two men floating in the water, and the one that we picked up was the only one alive. The USS Flaherty [DE-135], also a part of this Task Group, picked up the other man. There was also a great amount of oil on the water, parts of bodies, floating about, jackets, trousers, pillow cases, all sorts of odd things that indicated that the submarine had been mortally damaged.

The one survivor was in pretty bad shape. He had been in the water for some time but recovered sufficiently to answer questions in German. However, he, in turn, was transferred to the carrier and stated upon recovery that he had been on deck manning machine guns when attacked by aircraft and been blown clear into the water. I believe, although there is nothing official, at this time, that that was a kill. The air flasks in the water would indicate that something had been opened up in the way of pressure hull and would indicate that the submarine was sunk by aircraft.