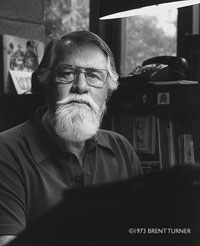 William Edward Turner (1917-1999) was a Columbus artist best known for the murals he created at various sites throughout the state for the Ohio Historical Society. But Turner's range of styles and depth of imagination went far beyond historical realism. Throughout his career, Turner was at times an editorial cartoonist, an illustrator for a local television station (and a minor celebrity in his own right), a war propagandist, an "industrial spy" for a fashion house, a commercial illustrator, a café caricaturist, and a movie studio storyboard illustrator. This range of experience is reflected in the many styles and media in which he worked, including abstract pen and ink drawings, whimsical cartoon characters and "loose realistic" depictions of the human form.

For Turner, drawing was a form of thinking. Collected here are examples of the expanse of Turner's thought.