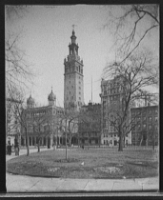 The December 1908 Six-Day bicycle race at Madison Square Garden was a spectacular show.  The New York Times announced that promoters collected over $100,000 worth of revenue, as fans clamored to see riders from all over the Western World.  Famed American rider Floyd MacFarland and German rider Walter Rutt won the race.  Tickets likely ranged from $.50 to $2 and, at Madison Square Garden, the race would attract both a working and middle class audience. 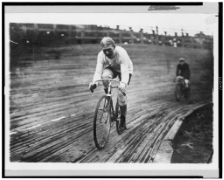 Ghosts of the Garden allows a viewer to experience the atmosphere of a 1908 Six-Day bicycle race at Madison Square Garden.  Six-Day racing was a format of bicycle track racing, which usually took place indoors on temporary wooden tracks.  Racers would ride for six days, usually 144 hours, as paired teams.  Often, fifteen teams would contest the event. One rider had to race the entire time, while the other could rest.  To win, teams would need the most laps, or if teams tied, the most sprint points.  Promoters and spectators preferred the latter system. And, by publicly announcing sprint times, promoters were able to spike attendance. Strapped into single-speed bikes with no brakes, promoters could guarantee audiences “spills and thrills” (and blood).  The sport was popular at Madison Square Garden from 1891 to the late 1930s.