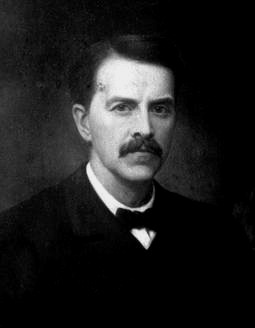 John W. Schildt in his biography of Hunter McGuire summed up the doctor as such: "When people needed to talk, he listened. Those who knew him said Dr. Hunter McGuire made you feel that you were the most important person in the world." Another quote that describes the Winchester physician is "Make not patients of your friends -but friends of your patients."

Such a man was Hunter Holmes McGuire, a native of Winchester, Virginia in the Northern end of the Shenandoah Valley. Born on October 11, 1835, at age 22 he was already a professor and full doctor. An impressive man, tall -- almost 6'4" -- thin, and handsome with black hair and blue eyes, Dr. McGuire was a believer in State's Rights and Virginia and thus embarked on a career as a Confederate Medical Officer in 1861.

At first, he signed up to fight as a private in the Winchester Rifles (Co. F of the 2nd Virginia which fought in the Stonewall Brigade), but McGuire was too valuable to serve as a foot soldier when the Confederacy needed trained doctors. McGuire served under many different commanders; among them were Thomas J. "Stonewall" Jackson, Richard Ewell, and Jubal Early. It is, however, as Jackson's surgeon that Dr. McGuire is remembered. McGuire would later say: "The noblest heritage I shall hand down to my children is the fact that Stonewall Jackson condescended to hold me and treat me as his friend."

McGuire served in all the major battles of the Army of Northern Virginia as the medical director of the famed Second Corps. In May of 1863, Jackson was wounded in the arm by friendly fire at the battle of Chancellorsville. After a week long battle with pneumonia, Jackson died of the pneumonia. (note: modern physicians think Jackson probably died of a pulmonary embolism, not pneumonia as McGuire thought) A picture of McGuire taken in mid-May shows him looking gaunt and exhausted, both indicative of the tireless efforts he put forth in an attempt to save his friend and patient. In fact, Dr. McGuire attempted to give his patient and friend round the clock care.

McGuire saw many tragedies in his career as a medical officer for the dying Confederacy. His good friend and commander Jackson died. His tent-mate Sandie Pendleton was mortally wounded in the Valley in 1864. McGuire's own brother Hugh was mortally wounded in 1865. His beloved home the Shenandoah Valley was in flames. And McGuire himself was captured at Waynesboro on March 2nd. Paroled by General Sheridan for his policy of not keeping Union Surgeons, McGuire was with the Army of Northern Virginia and tasted the bitter defeat of surrender at Appomattox Court House.

McGuire after the War went to Richmond where he built a hospital of his own and had a career that was varied and productive, and often included helping one who had worn the gray during the Civil War. Especially at first, but later as well, he would work without pay. He forever remained a staunch supporter of Jackson's reputation and image, writing several biographical sketches and giving speeches about his former commander. McGuire served also as a professor after the War, was president of numerous medical organizations and societies including the American Medical Association. In addition, he married and fathered 10 children, some of whom followed in his footsteps in pursuing medical careers. He died of complications of a cerebral embolism on September 19, 1900. He is buried amongst many Confederate notables in Richmond's Hollywood Cemetery. A statue stands on the Virginia State House grounds to the Winchester physician.

Hunter McGuire was a truly gifted individual. He was a deft surgeon, a highly gifted and competent doctor, a superb teacher, an outstanding orator, a brilliant administrator, and a prolific writer and author. One person remembered the physician in consulting with his patients was "like a husband pondering the problems of the sick wife; the father looking down on the afflicted child." His contributions to Virginia, the Confederacy, the United States, and medicine as a whole can not be overlooked.

None more striking has been known to this generation of Virginians. Few men have seen in these parts whose opinions, professional or other, carried as much weight. It may be doubted whether anybody has lived in Virginia since Lee and Jackson died who was loved by more people.

In character, he was all that men mean by "strong", "decided", "vigorous" or any similar term. Nevertheless, he was strikingly simple, straight-forward and unaffected, modest, even to reserve; yet throughout his life, a warrior waging sternest battle for reality and truth, of whom a friend could get real help when counsel was needed, because he had not the coward's gift for tempering opinions to suit the changing expression of his auditor's eye. A brave and true man, in whose sincerity and strength great Jackson could entirely confide; whose force General Lee upon occasion markedly acknowledged.

Hunter Holmes McGuire, M.D., L.L.D. President of the American Medical and of the American Surgical Associations; Founder of the University College of Medicine Medical Director, Jackson's Corps, Army of Northern Virginia. An Eminent Civil and Military Surgeon and Beloved Physician. An Able Teacher and Vigorous Writer; A Useful Citizen and Broad Humanitarian, Gifted in Mind and Generous in Heart, This Monument is Erected by his Many Friends.