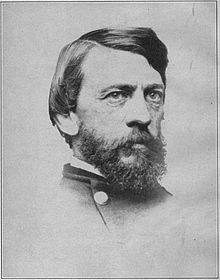 The featured writer is Dr. Jonathan Letterman, M.D. and his Gettysburg report.

Who was Jonathan Letterman?

Dr. Jonathan Letterman is known today as the Father of Modern Battlefield Medicine. While the medical director of the Army of the Potomac, he developed an ambulance system of getting the wounded off the field. At Antietam, he managed to do this all within 24 hours.

Letterman was an old Army surgeon. Born on December 10, 1824 in Washington Pennsylvania, Letterman graduated from Philadelphia's esteemed Jefferson Medical College and joined the U.S. Army in 1849. He served as an assistant surgeon, with the rank of captain, in such varied posts as Florida, Minnesota, and New Mexico. On April 16, 1862, he was promoted to major and full surgeon and assigned to the Army of the Potomac as medical director.

General McClellan granted his new medical director wide powers. Letterman evacuated the worst cases to general hospitals in the North. Around this time, he established an ambulance corps system and a system of division field hospitals.

Letterman also bettered the diet for the Union soldier, and improved sanitary conditions. He served with the Army of the Potomac in many battles including Gettysburg, where the main general hospital was named Camp Letterman for him.

Letterman resigned from the Army of the Potomac in January and left the Army on December 22, 1864. He headed west, to San Francisco, where he was an unsuccessful business man, practiced medicine, and wrote his memoirs. Tragedy struck in 1867 when his wife died suddenly. Letterman became depressed and was made an invalid by some sort of intestinal ailment. On March 15, 1872, he died. Dr. Jonathan Letterman was only 48 years old.

GENERAL: I have the honor to submit the following report on the operations of the medical department of this army at the battle of Gettysburg, July 1, 2, and 3:

As the subject of transportation has an important bearing upon the manner in which the wounded are attended to after a battle, it is necessary to make some allusion to the manner in which this department was supplied. It is scarcely necessary to say that if-the transportation is not sufficient to enable the officers of the department to conduct it properly, the effect must fall upon the wounded.

In the autumn of 1862, I investigated the subject very carefully, with the view to the adoption of some system instead of the irregular method and want of system which prior to that time was in vogue, to limit the amount necessary, and to have that amount always available. The transportation was one wagon to each regiment and one to each brigade. This gave all that was required, and it was not too much; and, it may be remarked, was a reduction of nearly one-half of that which had been in use prior to that time. This system worked well. At the battle of Chancellorsville, the department had upon the left bank of the Rappahannock means sufficient, had it been allowed to use them, for taking care of many more wounded than there came under its control.

On June 19, while the army was on the march, as it were, from before Fredericksburg to some unknown point north of the Potomac River, the headquarters being near Fairfax Court-House, Va., the transportation of the department was cut down by Major-General Hooker on an average of two wagons in a brigade, in opposition to my opinion, expressed verbally and in writing. This reduction necessitated the turning in of a large portion of the supplies, tents, &c., which were necessary for the proper care of the wounded in the event of a battle. Three wagons were assigned to a brigade of 1,500 men, doing away with regimental wagons. This method in its practical working is no system at all, as it is liable to constant changes, and proved to be, what I supposed at the time it would be, a failure to give the department the means necessary to conduct its operations.

The headquarters left Fairfax Court-House on June 26 ultimo, for some point as yet unknown in Maryland or Pennsylvania.
On the 25th of that month, I directed Assistant Surgeon [Jeremiah B.] Brinton, U.S. Army, to proceed to Washington, and obtain the supplies I had ordered the medical purveyor to have put up, and there await orders.

On the 26th, he was ordered to proceed with them to Frederick. This step was taken to obviate the want of supplies consequent upon the reduction of transportation. At this date it was not known that the army would be near Frederick; still, the risk had to be run, and the event justified the order, Dr. Brinton arriving at Frederick on June 28, the day after the arrival of headquarters there, with twenty-five army wagon loads of such supplies as would be most required in