The most common Civil War surgery was the amputation. A few words about why there were so many amputations may be appropriate here. Many people have construed the Civil War surgeon to be a heartless individual or someone who was somehow incompetent and that was the reason for the great number of amputations performed. This is false. The medical director of the Army of the Potomac, Dr. Jonathan Letterman, wrote in his report after the battle of Antietam:

The surgery of these battle-fields has been pronounced butchery. Gross misrepresentations of the conduct of medical officers have been made and scattered broadcast over the country, causing deep and heart-rending anxiety to those who had friends or relatives in the army, who might at any moment require the services of a surgeon. It is not to be supposed that there were no incompetent surgeons in the army. It is certainly true that there were; but these sweeping denunciations against a class of men who will favorably compare with the military surgeons of any country, because of the incompetency and short-comings of a few, are wrong, and do injustice to a body of men who have labored faithfully and well. It is easy to magnify an existing evil until it is beyond the bounds of truth. It is equally easy to pass by the good that has been done on the other side. Some medical officers lost their lives in their devotion to duty in the battle of Antietam, and others sickened from excessive labor which they conscientiously and skillfully performed. If any objection could be urged against the surgery of those fields, it would be the efforts on the part of surgeons to practice "conservative surgery" to too great an extent.

Still the Civil War surgeon suffers from being called a butcher or some other derisive term.

The slow-moving Minie bullet used during the American Civil War caused catastrophic injuries. The two minie bullets, for example, that struck John Bell Hood's leg at Chickamauga destroyed 5 inches of his upper thigh bone. This left surgeons no choice but to amputate shattered limbs. Hood's leg was removed only 4 and 1/2 inches away from his body. Hip amputations, like Hood's, had mortality rates of around 83%. The closer to the body the amputation was done, the more the increase in the wound being mortal. An upper arm amputation, as was done on Stonewall Jackson or General Oliver O. Howard (who lost his arm at Fair Oaks in 1862) had a mortality rate of about 24%.

Following is a description of a common battlefield amputation. Missing arms and legs were permanent, very visible reminders of the War. Amputees ranged from the highest ranking officers, like John B. Hood, Stonewall Jackson, and Oliver O. Howard, all the way down to the enlisted men, such as Corporal C.N. Lapham of the 1st Vermont Cavalry who lost both of his legs to a cannonball. Hood, Jackson, Howard, and Lapham were certainly not alone in their loss, as 3 out of 4 wounds were to the extremities...in the Federal Army this led to 30,000 amputations.

The wait for treatment could be a day, maybe two and that was not out of the ordinary. When treatment was finally done on the poor soldier, it was not done antiseptically. It would only be in 1865 that Joseph Lister embarked upon the era of antiseptic surgery. Surgeons did not even perform careful handwashing before operating. The doctors wore blood splattered clothes. When something was dropped, it was simply rinsed in cool, often bloody water. They used sponges that had been used in previous cases and simply dipped in cold water before using them again on the next person.

A surgeon recalled: "We operated in old blood-stained and often pus-stained coats, we used undisinfected instruments from undisinfected plush lined cases. If a sponge (if they had sponges) or instrument fell on the floor it was washed and squeezed in a basin of water and used as if it was clean"

The injuries to be dealt with were dreadful and the fault of the soft lead Minie Ball. With the capability to kill at over 1,000 yards, this soft lead bullet caused large, gaping holes, splintered bones, and destroyed muscles, arteries and tissues beyond any possible repair. Those shot with them through the body, or the head, would not be expected to live. Almost all wounds were caused by the bullet, with canister, cannonballs, shells, and edged weapons next on the list. 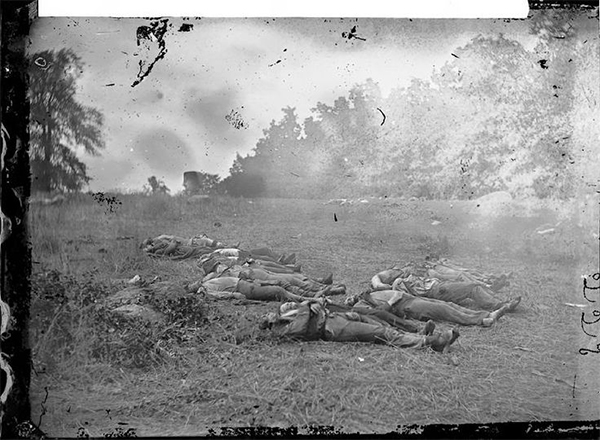 Confederate soldiers killed near the Wheatfield at Gettysburg
(Library of Congress)

The weapons (particularly the rifle) of the 1860s were far ahead of the tactics; i.e. the generals still thought to take a position you needed to go at it with the bayonet. The cylindrical lead bullet, the Minie ball, was rather large and heavy (.58 caliber usually). When it hit bone, it tended to expand. When it hit "guts" (i.e. the intestines) it tended to tear them in ways the old smoothbore musket ball did not. Since they crushed and smashed bone so badly, the doctors did not have much choice but to amputate a limb. Wounds to the stomach were almost always a death sentence.

Civil War doctors were woefully ill-prepared; of 11,000 Northern physicians, 500 had performed surgery. In the Confederacy, of 3,000, only 27. Many docs got their first introduction to surgery on the battlefield. Doctors usually did not specialize. Medical school, for many, was just 2 years (some less, few more). Surgeons reacted by adapting. They learned surgery on the job. And people died, of course, until they learned and became better... Many doctors were political appointments; there were no licensing boards in the 1860s... Army exam boards often even let in quacks. 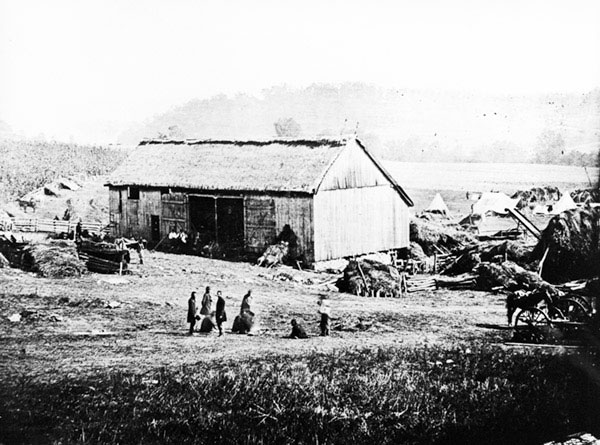 This barn at Sharpsburg served as a hospital for the wounded. Barns were often taken over by surgeons for use.
(Library of Congress)

Of the wounds recorded in the Civil War, 70%+ were to the extremities. And so, the amputation was the common operation of the Civil War surgeon.

The field hospital was hell on earth. The surgeon would stand over the operating table for hours without a let up. Men screamed in delirium, calling for loved ones, while others laid pale and quiet with the effect of shock. Only the division's best surgeons did the operating and they were called "operators". Already, they were performing a crude system of triage. The ones wounded through the head, belly, or chest were left to one side because they would most likely die. This may sound somewhat cruel or heartless, but it allowed the doctors to save precious time and to operate on those that could be saved with prompt attention.

The surgeon would wash out the wound with a cloth (in the Southern Army sponges were long exhausted) and probe the wound with his finger or a probe, looking for bits of cloth, bone, or the bullet. If the bone was broken or a major blood vessel torn, he would often decide on amputation. Later in the War, surgeons would sometimes experiment with resection, but amputation was far more common.

Deciding upon an amputation, the surgeon would administer chloroform to the patient. Hollywood's portrayal of battlefield surgery is dramatized and largely false; anesthesia was in common and widespread use during the war.... it would make more complicated and longer operations possible as the era of antiseptic surgery began in 1865 (too late for the poor Civil War soldier). With the patient insensible, the surgeon would take his scalpel and make an incision through the muscle and skin down to the bone. He would make incisions both above and below, leaving a flap of skin on one side. 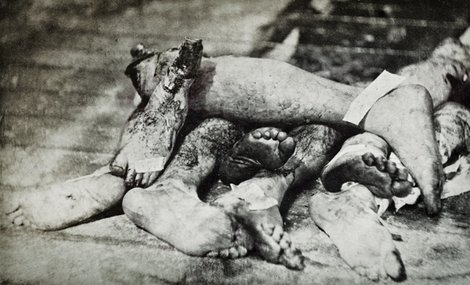 Taking his bonesaw (hence Civil War slang for a doctor is a "Sawbones") he would saw through the bone until it was severed. He would then toss it into the growing pile of limbs. The operator would then tie off the arteries with either horsehair, silk, or cotton threads. The surgeon would scrape the end and edges of the bone smooth, so that they would not work back through the skin. The flap of skin left by the surgeon would be pulled across and sewed close, leaving a drainage hole. The stump would be covered perhaps with isinglass plaster, and bandaged, and the soldier set aside where he would wake up thirsty and in pain, the "Sawbones" already well onto his next case.

15 years after the War, surgeon George Otis cited the five principal advances of Civil War surgery: the surgeons had learned "something" about head injuries, how to deal with awful "ghastly wounds" without dismay, they had learned how to litigate arteries, information on injuries to spine and vertebrae had been "augmented," and "theory and practice" in chest wounds had been forwarded.A good surgeon could amputate a limb in under 10 minutes. If the soldier was lucky, he would recover without one of the horrible so-called "Surgical Fevers", i.e. deadly pyemia or gangrene.

A little about the "Surgical Fevers". These were infections arising from the septic state of Civil War surgery. As you should have been able to see, the Civil War surgeon was interested not so much in cleanliness, but speed. As such, and not knowing anything about antiseptic surgery, fevers arose. Of these, the most deadly was probably pyemia. Pyemia means, literally, pus in the blood. It is a form of blood poisoning. Nothing seemed to halt pyemia, and it had a mortality rate of over 90%. Other surgical diseases included tetanus (with a mortality rate of 87%), erysipelas, which struck John B. Gordon's arm after he was wounded at Antietam, and osteomyelitis which is an inflammation of the bone. Also, there was something called "Hospital Gangrene". A black spot, about the size of a dime or so, would appear on the wound. Before long, it would spread through, leaving the wound an evil smelling awful mess. The Hospital Gangrene of the Civil War is an extinct disease now.