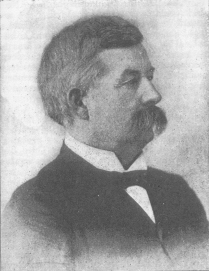 Gen'l John B. Stone, Commander of the Missouri State Division, U. C. V., was born in Marion, Perry County, AL, on 5 September 1842, volunteering as a private in the 4th Alabama Infantry Regiment at Selma in April, 1862. He participated in the battles of 1st and 2nd Manassas, Seven Pines, the Seven Days fighting around Richmond, Chickamauga, Hanover Junction, The Wilderness, Spotsylvania Courthouse, Spanish Fort, Blakeley, AL, etc. He was wounded five times, and for meritorious conduct at The Wilderness, he was promoted to the captaincy of Co. "I", 62nd AL Infantry.

Following the war, he made his home at Selma until 1874, then moved to Dallas, TX , in the real estate field. He moved to Kansas City in 1885 and built up a real estate business, and he was presiding judge of the county court of Jackson County from 1895 to 1898. He was a Mason, member of the Knights of Pythias, the Episcopal Church, and the Missouri Historical Society. He died at his home in Kansas City, 31 May 1925.