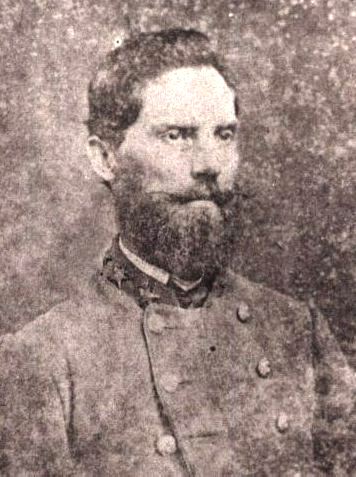 Lemuel Green Mead was a native of Paint Rock, in western Jackson County, Alabama. His family, who came from Virginia, were prominent locally. His uncle, Lemuel Mead of Huntsville, was a signer of the Alabama Constitution of 1819. Lemuel G. Mead was a Paint Rock lawyer when the war began. He was also master of the Paint Rock Masonic Lodge.

In September 1861, Mead raised the "Paint Rock Rifles" which became Company C, 26th (later 50th) Alabama Infantry Regiment. He led his men into combat at Shiloh in April 1862 but resigned his commission on 1 July 1862, after North Alabama had been invaded by Union forces. Mead was soon commissioned a captain of partisan rangers and authorized to operate behind the enemy lines in North Alabama and Tennessee. On 18 January 1864, Mead was authorized to increase his command to a battalion. His operations were so successful that on 1 March 1865, Mead was authorized to reorganize his men into a regiment of three battalions. Mead's friend, Gen'l John Brown Gordon, pushed for Mead's temporary promotion to the rank of brigadier general. However, the war ended before the promotion could take place.

In May 1865, Colonel Mead refused demands for his surrender, replying that he "saw no military necessity to do so." Mead was accordingly declared an outlaw by Union Gen'l George Thomas. Mead swam his horse across the Tennessee River and held out for a short time longer on Brindley Mountain, in Marshall County. He finally took the oath of allegiance in September, 1865, at Montgomery.

After the war, Mead moved his law practice to Scottsboro, Alabama, where he prospered. He was active in Democratic politics, becoming an elector for Samuel Tilden in the "stolen election" of 1876.

Colonel Mead was killed in the town of Gurley, Alabama, in 1878 while walking with Captain Frank B. Gurley, late of the 4th Alabama Cavalry. The killer approached Mead and shot him once with a shotgun. As Mead lay on the ground, the killer then emptied the other barrel into him. The cause of the shooting was a dispute over sharecropping, allegedly involving just one bale of cotton. The killer fled to Texas, but years later was located and returned for trial. The gunman was found not guilty, since the defense attorney (no less than Leroy Pope Walker, former Confederate Secretary of War) argued self-defense, since Col. Mead had been carrying a pistol at the time! (Walker is also famous for winning an acquittal on robbery charges in Huntsville for Missouri outlaw, Frank James.)