The men and women who opposed woman's suffrage did so for many reasons. Many believed that men and women were fundamentally different and that women should not sully themselves in the dirty world of politics. Others argued that most women did not want the vote and that only a few, mostly radical, women would use it. This thread of argument worked in conjunction with the argument that men could not grant suffrage to only those they deemed worthy; instead, woman suffrage raised the possibility that all women would receive their ballots at the same time, without racial, education, or class distinctions. This frightened those in power, especially the whites of the South.

Others also acted out of self-interest when working against woman's suffrage. Specifically, many industrialists, distillers, and brewers felt threatened by the reforming potential of women voters, believing that women were different than men and would act out of their "natural" maternal instinct to prohibit alcohol consumption, interfere in business practices, and regulate working conditions and hours. 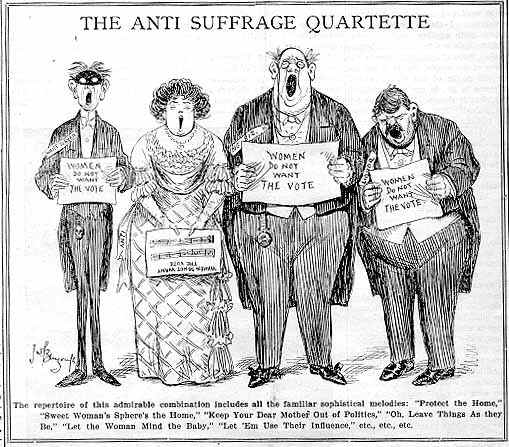 The following cartoons, photographs, and essays represent variations of these types of arguments. What can we learn about the anti-suffrage movement from the above cartoon from the Woman's Journal in 1912? Does the fact that the Woman's Journal was the voice of the suffragists change the meaning of the cartoon? From left to right, the four singers wear these respective labels, "White Slaver," "Anti," "Big Biz," and "Liquor."

To continue learning about the arguments offered by anti-suffrage activists, follow this link.