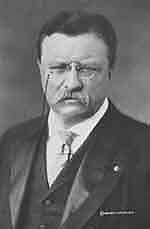 Theodore Roosevelt (1858-1919) served as the twenty-sixth president of the United States. Roosevelt was a politician whose popularity extended beyond his partisan supporters. Affectionately known as "Teddy, " he was a man of wide intellectual interests and a forceful personality that proved attractive to many Americans. Roosevelt's restless energy, personal ambitions, and commitment to a federal executive branch with large powers led eventually in 1912 to his revolt from the Republican party, which had been his political home since his youth, in favor of forming and leading as presidential candidate the Progressive Party (of 1912).

T.R. came from the privileged background of a moderately wealthy New York City family. As a child, he suffered from severe asthma attacks. Exercise and outdoor activities seemed to help with the affliction, and later in life Roosevelt would advocate what he called the strenuous life; he also became a dedicated conservationist and nature lover. After private tutoring, the young Roosevelt earned his baccalaureate degree at Harvard University. A man with tremendous physical energy, and of wide ranging curiosity and considerable intellectual ability, Roosevelt subsequently earned much of his living from writing books and magazine articles.

Roosevelt also as a young man entered public service. At the age of 23 he was elected to the New York State Assembly, or legislature. In a highly partisan age fraught with corruption, the young Republican fought corruption and his party's machine politics. The young reformer suffered defeats, and he actually lived in the Dakota Territory for two years on a ranch. When Roosevelt returned to New York, he was appointed to federal office, service on the U.S. Civil Service Commission (1889-95) and as president of the New York City Board of Police Commissioners (1895-97).

When President William McKinley appointed him Assistant Secretary of the Navy in 1897, Roosevelt became a vociferous advocate of war with Spain and an expansion of the American Empire. He resigned his position to lead a cavalry regiment (informally known as the rough riders) in the Spanish-American War of 1898.

Roosevelt returned from the war a hero, and regained elective office, now as Governor of New York, then the nation's largest, most populous state. While Governor, Roosevelt worked again to end corruption and to develop the state's civil service. His reform positions enraged party bosses, who arranged for him to receive the Republican nomination for Vice President. Roosevelt ran with McKinley in the latter man's reelection campaign, and won. Roosevelt became President when McKinley died from an assassin's bullet in the autumn of 1901.

Roosevelt remained a reformer while service as President of the United States. At first, with no popular mandate, he worked quietly to expand the executive powers of the office. Roosevelt believed in a strong executive branch. Confident of his ability to determine the public interest in the face of competing special interests, Roosevelt thought that the executive branch should be capable of defining the public interest and its powers expanded to protect that interest. Thus, in his first years as President Roosevelt succeeded in having the Congress create a Bureau of Corporations to collect information about the private behaviors of business corporations, and from that information make determinations about the public interest with regard to corporations. Roosevelt also had initiated an anti trust suit against the Northern Securities Corporation, a holding company constructed by several of the nation's leading railroad and banking leaders to end competition among railroads in much of the nation's northwest. Roosevelt's interest in the suit was demonstrating that the power of the executive branch was greater than the power of even the wealthiest industrialists and financiers. Roosevelt wanted the executive authority to determine and safeguard the public interest in relations among business firms, and between businesses and their customers. Also, in 1902 Roosevelt intervened in the Anthracite Coal Strike, insisting on arbitration. Again, in his eyes the dispute between labor and capital must be settled according to the public interest. This action was the first occasion in American history when presidential authority helped organized labor win important concessions from powerful corporations. Roosevelt said that his actions were on behalf of the executive branch ensuring a "square deal" for labor and all Americans. Thereafter Roosevelt's political agenda was known as the square deal.

The electorate returned Roosevelt to the White House in 1904 by a large margin over his Democratic opponent. Roosevelt was personally popular, and he had demonstrated great political skill in working both with established party leaders and in promoting a reform agenda. After receiving his own popular mandate, Roosevelt promoted further reform legislation. Following his leadership, in 1906 Congress strengthened railroad regulation by empowering the Interstate Commerce Commission (organized in 1887, but thereafter weak) to set maximum charges on the railroads, then the nation's most important system of internal transportation. That same year Congress passed legislation providing for federal inspection of meat and other foods, and for federal regulation of drugs to ensure their safety and effectiveness. These measures helped consumers, of course, but they also were widely welcomed by business firms who saw them providing a stable and honest commercial environment. In the same vein, President Roosevelt was an advocate of scientific conservation, and promoted measures for the wise use of natural resources, and for their renewal when possible (as in the case of forests). Again, Roosevelt received considerable support from businesses that stood to gain from scientific conservation and the planned use of natural resources.

Although sometimes portrayed as anti business and as a "trust buster," in fact Roosevelt was neither. Roosevelt did believe, however, that there was a public interest higher than any private interest, including the wealthiest. The square deal program, thus, while calling for business regulations did so in the spirit of creating greater cooperation between government and business, and business and labor, on behalf of what Roosevelt thought was the larger common good. In this vein, privately and politically, but not publicly, Roosevelt advocated the federal incorporation of large firms. With this device, never enacted, large firms would approve their charters not from the states but from the national government. A national agency, such as the Bureau of Corporations, thus would have the ability to ensure that private investment decisions occurred within the framework of the public interest.

In foreign policy, Roosevelt was an activist and imperialist. He encouraged the build up of American naval power, and displayed that power by sending the new American fleet on a world tour. Roosevelt also mediated a peace settlement in the Russo-Japanese war of 1905, for which the President won the Nobel Prize for peace.

When Roosevelt left office in 1909, he immediately went on a long safari in East Africa. The safari was part scientific expedition, part hunting trip, and part publicity stunt for the Roosevelt the writer. When the safari ended, Roosevelt and his wife made a grand tour of European capitals, where they were warmly received.

Friction was developing between the ex-President and his friend, William Howard Taft, who was elected in 1908. Roosevelt was always a controversial if popular figure within his own Republican Party, and he and Taft, it turned out, disagreed on a number of issues. By 1911 there was an open revolt in the party of those politicians who styled themselves as "progressives," a revolt that Roosevelt eventually joined. From this rebellion eventually came the split that led to the formation of the Progressive Party in 1912 and its nomination of Roosevelt for President.

Marc Horger was the author of this text.
contents | the candidates | sitemap | credits