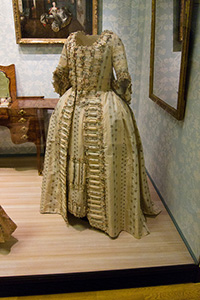 The 17th century was characterized by the Baroque movement, the French Grand Siecle, the Scientific Revolution and the Dutch Golden Age. The Thirty Years' War, the end of the Dutch Revolt, the English Civil War, the demise of the Polish-Lithuanian Commonwealth, and the Great Turkish War occurred during this time period.  China lost approximately one third of its population with the collapse of the Ming Dynasty. European colonization of the Americas also took place. By the end of the century, the monarch was a figurehead in England with parliament the dominant force in government.

During the 17th century chemistry and astronomy were developed. With the beginning of the scientific revolution, natural philosophers were now called scientists and science was recognized as a field. The science of chemistry as also developed from medieval alchemy and astology evolved to astronomy. Several new inventions appeared such as the refracting telescope, the slide rule, barometere, air and steam pumps, adding machine, steam turbine, reflecting telescope, and universal joint. A method for blood transfusions was developed and bacteria was first seen through a microscope.