Ridpath's History of the World 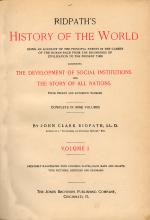 Ridpath's History of the World

John Clarke Ridpath was an influential American historian of the late 19th Century.  Born into poverty in Indiana in 1840, Ridpath nevertheless excelled in academics and graduated from Asbury College (now DePauw University) with the highest possible honors.  After serving as a public school administrator, he joined the faculty at Asbury College and eventually became its Vice President.  While at Asbury, he began his writing career with the publication of several studies of American history.  In the 1880s, Ridpath left his position at Asbury and devoted his time to writing, especially on the subject of world history.

In 1894, Ridpath published the first edition of his History of the World, which provided readers with a complete history of known human civilizations.  Beginning with Ancient Egypt and ending with the First World War, he dealt with political, economic, social, and cultural issues in an attempt “to bring within the reach of the average reader a concise and accurate summary of the principal events in the career of the human race.”  The series was immensely popular and was reissued with additions numerous times in the late 19th and early 20th centuries.

Although Ridpath strove to integrate cutting-edge scientific research into his history, History of the World bears heavily the stamp of its time.  Like many European and American intellectuals of the late 19th Century, Ridpath was heavily influenced by Social Darwinism, imperialism, and nationalism.  Specifically, he used Social Darwinist concepts of race and geography to explain the so-called “natural” or “national” character of a wide variety of civilizations.  Ridpath avoids the extreme Euro-centrism of many contemporaries but nevertheless operates with explicit notions of racial hierarchy.  He often refers to Africa as the “Dark Continent” and to Africans as “savages.”  By acknowledging the historical context of Ridpath’s intellectual environment, one can examine the ways in which imperialism and Social Darwinism shaped many Europeans’ and Americans’ understanding of history, progress, and the world around them.

People and the Kings -- New World and Reformation -- The English Reformation

Age of Frederick the Great -- Age of Revolution -- The United States

Index to Volumes I to IX.