The War of the Rebellion: Official Records of the Civil War 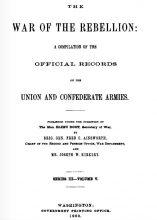 (Please Note: Portions of the Official Records are currently missing from our site. For a complete version, visit Cornell University Library's web site at http://collections.library.cornell.edu/moa_new/waro.html.)

No serious study of the American Civil War is complete without consulting the Official Records. Affectionately known as the "OR", the 128 volumes of the Official Records provide the most comprehensive, authoritative, and voluminous reference on Civil War operations. The reports contained in the Official Records are those of the principal leaders who fought the battles and then wrote their assessments days, weeks, and sometimes months later. The Official Records are thus the eyewitness accounts of the veterans themselves. As such they are "often flawed sources – poorly written in some cases, lacking perspective in others, frequently contradictory and occasionally even self-serving." Nevertheless, they were compiled before the publication of other literature on the subject that, in several cases, caused some veterans to alter their memory and perception of events later in life.

Impetus for publishing the Official Records came from Union General-in-Chief Henry Wager Halleck. Apparently overwhelmed by the task of writing his 1863 annual report to Congress, Halleck recommended to the Committee on Military Affairs the collection and publication of official documents and reports on all Civil War operations. Republican Senator Henry Wilson of Massachusetts, Chairman of the Committee on Military Affairs, introduced a Joint Resolution "to provide for the printing of the official reports of the armies of the United States." Both the House and the Senate adopted Wilson’s resolution on May 19, 1864. President Abraham Lincoln signed the bill into law the next day.

Officially titled, The War of the Rebellion: A Compilation of the Official Records of the Union and Confederate Armies, the Official Records are compiled in 127 volumes, plus a General Index and accompanying Atlas. Editor Robert N. Scott divided the OR into four major topical areas:

A word of caution must be made here about the value and limitations of the Official Records. As primary source material, the Official Records are, without question, the most complete and impartial documentation on the American Civil War. They provide a foundation for serious research into virtually any aspect of the war. On the other hand, no study of the American Civil War should rely exclusively on the Official Records. The accounts contained in the OR were not edited for accuracy, and due to space considerations, only excerpts of reports were often included. Researchers should thus verify the information found in these reports with other source material to gain as complete a picture of events as possible.