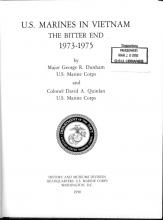 The War Goes On

The Fleet Marines Are Readied

The Evacuation of Phnom Penh

Recovery of the S S Mayaguez

US Marine Officers in Billets in South Vietnam, US

For use by the Superintendent of Documents, U.S. Government Printing Office Washington, D.C. 20402

This is the ninth volume in a nine-volume operational and chronological historical series covering the Marine Corps' participation in the Vietnam War. A separate functional series complements the operational histories. This volume details the final chapter in the Corps' involvement in Southeast Asia, including chapters on Cambodia, the refugees, and the recovery of the container ship SS Mayaguez.

In January 1973, the United States signed the Paris Peace Accords setting the stage for democracy in Southeast Asia to test its resolve in Cambodia and South Vietnam. The result was not a rewarding experience for America nor its allies. By March 1975, democracy was on the retreat in Southeast Asia and the U.S. was preparing for the worst, the simultaneous evacuation of Americans and key officials from Cambodia and South Vietnam. With Operation Eagle Pull and Operation Frequent Wind, the United States accomplished that task in April 1975 using Navy ships, Marine Corps helicopters, and the Marines of the III Marine Amphibious Force. When the last helicopter touched down on the deck of the USS Okinawa at 0825 on the morning of 30 April, the U.S. Marine Corps' involvement in South Vietnam ended, but one more encounter with the Communists in Southeast Asia remained. After the seizure of the SS Mayaguez on 12 May 1975, the United States decided to recover that vessel using armed force. Senior commanders in the Western Pacific chose the Marine Corps to act as the security force for the recovery. Marines of 2d Battalion, 9th Marines and 1st Battalion, 4th Marines played a key role in the events of 15 May 1975 when America regained control of the ship and recovered its crew, concluding American combat in Indochina and this volume's history.

Although largely written from the perspective of the III Marine Amphibious Force, this volume also describes the roles of the two joint commands operating in the region: the Defense Attache Office, Saigon, and the United States Support Activities Group, Thailand. Thus, while the volume emphasizes the Marine Corps' role in the events of the period, significant attention also is given to the overall contribution of these commands in executing U.S. policy in Southeast Asia from 1973 to 1975. Additionally, a chapter is devoted to the Marine Corps' role in assisting thousands of refugees who fled South Vietnam in the final weeks of that nation's existence.

The authors, Major George Ross Dunham and Colonel David A. Quinlan, individually worked on this volume while assigned to the History and Museums Division, Headquarters Marine Corps. Colonel Quinlan, who is now retired and resides in Hartford, Connecticut, began the book in 1976. Major Dunham, who recently retired and resides in Dunkirk, Maryland, inherited his co-author's work and completed the majority of the volume during his tour from 1985 to 1990. Both authors are graduates of the U.S. Naval Academy and have advanced degrees. Colonel Quinlan, who was an infantry officer, has a juris doctor degree from George Washington University (1979) and Major Dunham, who was an aviator, has a master of arts degree in history from Pepperdine University (1976).

Let every nation know, whether it wishes us well or ill, that we shall pay any price, bear any burden, meet any hardship, support any friend, oppose any foe, to assure the survival and success of liberty.

U.S. Marines in Vietnam: The Bitter End, 1973-1975 is a story about commitment, sacrifice, and the price America and its ally, South Vietnam, paid. It answers no questions, places no blame, and offers no prophetic judgement, but provides an historical account of the end of a state and the beginning of new lives for those fortunate enough to escape that upheaval. This description of the United States Marine Corps' involvement at the bitter end of America's military presence in Southeast Asia also traces the effects of uncontrolled fear on a society fighting for its survival.

The effect of fear on the fighting man on the battlefield was no different in 1975 in South Vietnam than it was more than 2,400 years earlier, when the Athenians fought to defend their beloved city. In preparing his Marines and sailors for battle in the Peloponnesian War of 429 B.C., and anticipating their fear of death, Phormio of Athens told them:

The South Vietnamese Armed Forces in the spring of 1975 were rendered useless as a fighting force. No level of training or skill, no program of Vietnamization, no amount of money could have reversed the rampant spread of fear that engulfed all of South Vietnam in March and April of 1975. Incredible acts of courage temporarily checked the nation's slide into oblivion, at places like Xuan Loc and Bien Hoa, but fear ruled the day. Its only antidote, courageous leadership at the highest levels, rapidly disappeared as the NVA war machine gained momentum. As one senior leader after another opted to use his helicopter to evacuate rather than to direct and control the defensive battle, strategic retreats turned into routs and armies turned into mobs of armed deserters. Amidst all this chaos, the U.S. Marine Corps aided its country in the final chapter of the Vietnam War, the evacuation of American citizens, third-country nationals, and as many South Vietnamese as conditions permitted.

To describe those events accurately, the authors used, for the most part, original sources, including interviews of many of the participants. A debt of gratitude is owed to many people for the compilation and collation of that material. In particular, we thank the other Services and their respective historical agencies for their contributions, with a special note of appreciation due to Dr. Wayne W. Thompson and Mr. Bernard C. Nalty, both of the Office of Air Force History, and Dr. Edward J. Marolda of the Naval Historical Center. A large portion of the available source material was provided by the staff of the Marine Corps Historical Center and for that contribution we are very appreciative. In particular, we thank the Historical Center librarian, Miss Evelyn A. Englander, and archivist, Mrs. Joyce Bonnett, and their staffs; the Reference Section (Mr. Danny J. Craw-ford and staff); the Oral History Section (Mr. Benis M. Frank and Mrs. Meredith P. Hart-

ley); and the Publications Production Section (Mr. Robert E. Struder, Mrs. Catherine A. Kerns, Mr. W. Stephen Hill, and Corporal Andre L. Owens III). Of course, history cannot be read until it has been written, and rewritten, and for that demanding task of editing, we thank the Chief Historian, Mr. Henry I. "Bud" Shaw, Jr.; the head of the Vietnam Histories Section, Mr. Jack Shulimson; and our colleagues in the section who had to read our work in its most primitive state (Lieutenant Colonel Gary D. Solis, Major Charles D. Melson, and Mr. Charles R. "Rich" Smith). To those whose names are too many to mention here, we extend our sincerest gratitude for loyalty and special acts of assistance in this project, and for those who reviewed our manuscript and contributed comments and pictures, we offer you a book bearing your imprint, and our thanks. The authors, however, are responsible for the content of the text, including opinions expressed and any errors in fact.

We would like to salute every Marine and American who served in Vietnam and dedicate this book to those who paid the ultimate price for the "survival and success of liberty." In particular, we commend the sacrifice of the four Marines who died in South Vietnam on 29 April 1975: Lance Corporal Darwin D. Judge; Corporal Charles McMahon, Jr.; First Lieutenant Michael J. Shea; and Captain William C. Nystul; and ask that the fourteen Marines who lost their lives on Koh Tang in Cambodia, on 15 May 1975, also not be forgotten.