US Marines in Vietnam: 1968 The Defining Year 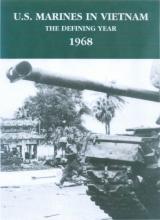 US Marines in Vietnam: 1968 The Defining Year

Chapter2
The 3d Marine Division and the Barrier

Chapter3
War in the Eastern DMZ in Early and Mid-January

Chapter 6
Heavy Fighting and Redeployment: The War in Central and Southern I Corps, January 1968

Chapter 7
The Enemy Offensive in the DMZ and Southern Quang Tri, 20 January-8 February

Chapter 11
The Struggle for Hue-Stalemate in the Old City

Chapter 13
Post-Tet in I Corps

Chapter 14
The Siege of Khe Sanh

Chapter 15
The Battle for Dong Ha

Chapter 17
Mini-Tet and Its Aftermath in Southern I Corps

Chapter 24
A Matter of Doctrine: Marine Air and Single Manager

Chapter 25
A Question of Helicopters

Chapter 28
Backing Up The Troops

Chapter 30
Outside of III MAF

Marines and Military Law in Vietnam: Trial By Fire, 1989

For sale by the U.S. Government Priming Office

This is the last volume, although published out of chronological sequence, in the nine-volume operational history series covering the Marine Corps' participation in the Vietnam War. A separate functional series complements the operational histories. This book is the capstone volume of the entire series in that 1968, as the title indicates, was the defining year of the war. While originally designed to be two volumes, it was decided that unity and cohesion required one book.

The year 1968 was the year of the Tet Offensive including Khe Sanh and Hue City. These were momentous events in the course of the war and they occurred in the first three months of the year. This book, however, documents that 1968 was more than just the Tet Offensive. The bloodiest month of the war for the U.S. forces was not January nor February 1968, but May 1968 when the Communists launched what was called their "Mini-Tet" offensive. This was followed by a second "Mini-Tet" offensive during the late summer which also was repulsed at heavy cost to both sides. By the end of the year, the U.S. forces in South Vietnam's I Corps, under the III Marine Amphibious Force (III MAF), had regained the offensive. By December, enemy-initiated attacks had fallen to their lowest level in two years. Still, there was no talk of victory. The Communist forces remained a formidable foe and a limit had been drawn on the level of American participation in the war.

Although largely written from the perspective of III MAF and the ground war in I Corps, the volume also treats the activities of Marines with the Seventh Fleet Special Landing Force, activities of Marine advisors to South Vietnamese forces, and other Marine involvement in the war. Separate chapters cover Marine aviation and the single manager controversy, artillery, logistics, manpower, and pacification.

U.S. Marines in Vietnam, The Defining Year, 1968 like the preceding volumes in this series is largely based upon the holdings of the Marine Corps Historical Center. These include the official unit command chronologies, after-action reports, message and journal files, various staff studies, oral histories, personal papers, and reference collections. In addition, the authors have used the holdings of the other Services and pertinent published primary and secondary sources. Most importantly, nearly 230 reviewers, most of whom were participants in the events, read draft chapters and made substantive comments. They are listed by name in a separate appendix. While some classified sources have been used, none of the material in the text contains any classified information.

To a large extent, the measurement of this war relied not upon territory occupied, but upon casualties inflicted upon the enemy. In enumerating enemy casualties, the authors are not making any statement upon the reliability or accuracy of these numbers. These are merely the figures provided by the reporting units. They are important in that the U.S. military and national leadership depended in part upon the comparative casualty yardstick to report and evaluate progress in the war.

In any project this large and that involved so many people, the authors are in debt to several of their associates, past and present, in the History and Museums Division. While it is not possible to list everyone, we would be most negligent if we did not thank the following. First, Brigadier General Edwin H. Simmons, Director Emeritus, provided the vision and backing for the entire series, insisting upon readability and accuracy. Colonel Michael F. Monigan, Acting Director, gave the impetus for final completion of the project. Chief Historian Benis M. Frank, and his predecessor, Henry I. Shaw, Jr., furnished editorial guidance and encouragement. Ms. Wanda J. Renfrow of the Histories Section and Mr. Robert E. Struder, Head of Editing and Design, read the entire manuscript together with Mr. Frank and prevented several minor errors and some embarrassments. Mrs. Cathy A. Kerns, of the Editing and Design Section, typed the photograph captions and the Medal of Honor Appendix. Both Mrs. Kerns and Ms. Renfrow painstakingly inserted the multitudinous entries for the index, carefully checking the index against the text. Finally, Ms. Renfrow patiently and ably made the numerous revisions in the organization of the index. Mr. William S. Hill provided technical direction for both the maps and insertion of the photographs. Ms. Evelyn A. Englander of the library was most helpful in obtaining publications. The Archives staff (under the direction of Fred J. Graboske and his predecessor, Ms. Joyce Bonnett), especially Ms. Joyce M. Hudson and Ms. Amy C. Cohen, cheerfully made their resources available, as did Art Curator John T Dyer, Jr. The Reference Section under Danny J. Crawford was always most cooperative, especially Ms. Lena M. Kaljot, who assisted in the duplication of most of the photographs. A special thanks goes to Lieutenant Colonel Leon Craig, Jr., Head of the Support Branch; his administrative officer, First Lieutenant Mark R. Schroeder; and his enlisted Marines, especially Staff Sergeant Myrna A. Thomas and Corporal Juan E. Johnson, who assisted in that last push for publication.

Both Mr. Struder and Mr. Hill adroitly handled the liaison with the Typography and Design Division of the U.S. Government Printing Office in the layout of the book. Mr. Struder deftly and professionally assisted in the reading of page proofs and Mr. Hill meticulously monitored the preparation of charts and maps. The authors also appreciate the efforts of Mr. Nicholas M. Freda and Mr. Lee Nance of the Typography and Design Division, Mr. Freda for his careful layout of text and Mr. Nance for the final preparation of all maps and charts.

Special mention and most heartfelt thanks go to various interns who have assisted with the preparation of this volume. Naval Academy Midshipman Third Class Thomas Moninger, who prepared the Chronology of Events, and Maderia School students Ms. Jaime Koepsell and Ms. Sylvia Bunyasi who drafted the initial Command and Staff list. Marine Sergeant Neil A. Peterson, a student at the Citadel, sketched over half of the draft maps used in this volume. James E. Cypher, a senior at Loyola University, in New Orleans, assisted in the tedious but most important final editing of the index. Finally, there was Peter M. Yarbo, who as a student at Johns Hopkins, for over a year, once a week, took the early morning train from Baltimore to Washington, to assist with the project. Peter prepared several of the charts in the appendices, but even more significantly, he did almost all of the photographic research, saw that the photos were duplicated, and made the initial selection of photographs, organizing them by chapter. This book could never have been published at this time without his specific assistance and that of the other interns.

The authors are also indebted to Dr. Douglas Pike, who opened up his Indochina Archives, then located at the Institute of East Asian Studies, University of California, Berkeley, for their examination. Mr. Robert J. Destatte, Defense Prisoner of War and Missing Personnel Office, U.S. Department of Defense, provided a translation of several published Vietnamese documents. Finally our thanks to those who contributed comments on the draft and to our colleagues in the other Defense historical offices, who assisted with their advice and comments. In the end, however, the authors alone assume sole responsibility for the content of the text, including opinions expressed and any errors in fact.