namese forces. The advisory staff consisted of a U.S. Marine major as senior military advisor to the Rung Sat Special Zone and a headquarters team of three officers and two enlisted and two subsector teams, each with one officer and three enlisted.12

Major Edward J. Bronars, who arrived in Vietnam during the summer of 1964, was the first senior military advisor to the Rung Sat Special Zone. On 30 July 1965, Major Albert C. Smith, Jr., succeeded Bronars as the senior advisor and remained in that position through the end of the year. During this period, the authorized number of U.S. advisors in the Rung Sat was reduced to nine, eight Marines and one Navy corpsman. In addition to the billet of senior advisor, there were two other officer billets, an infantry advisor and an intelligence advisor. The five enlisted billets were operations, intelligence, psychlogical warfare, communication, and Navy hospital corpsman.13*

Advisor duties encompassed aiding the Vietnamese in planning and executing small amphibious operations to rid the Rung Sat of the Viet Cong hiding in its swamps. Advisors accompanied the Vietnamese troops on all operations. The Marines also arranged for coordinated aerial observation of the Rung Sat, close air support of operations, and naval gunfire spotters and liaison personnel whenever U.S. warships were available for support. Requests for medical evacuation, flare ship support, photo reconnaissance, and command and control helicopter support were also initiated by the advisory staff.14

U.S. Marines of the I Corps Advisory Group

In September 1964, the Marine Corps agreed to furnish 60 Marines to the I Corps Advisory Group to assist the U.S. Army in advising the 1st and 2d ARVN Divisions. These 24 officer and 36 enlisted billets were intermingled with the Army advisory positions of the 1st through 6th ARVN Regiments and the artillery battalions of both divisional and corps artillery. 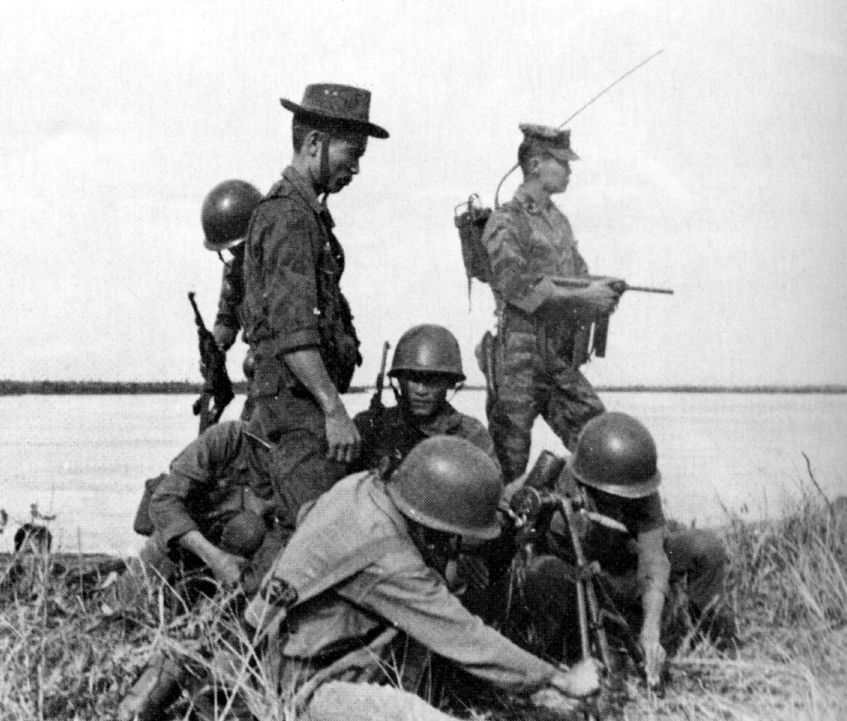 Communications advisor to the Rung Sat Special Zone, Marine Sergeant Raymond S. Komo, stands guard on the banks of the Long Too River as a Vietnamese Regional Force mortar team sets up. The Long Tao was the northern tributary/ceding into the Rung Sat.

General Westmoreland proposed to General Greene, the Marine Corps Commandant, during the latter's visit to Saigon in April 1965, that the Marine Corps should take over the entire advisory responsibility for ICTZ. This proposal would have raised the number of Marine advisors in I Corps to about 800 men.15 The plan was never implemented, but on 7 August General Walt assumed the role of senior U.S. advisor to I Corps and became responsible for the U.S. military advisory effort in the five northern provinces. The makeup of the I Corps advisory group remained predominately Army. **

**The exact number of Marines serving as advisors in I Corps is not known. The authors have not been able to uncover any Joint Table of Distribution for the I Corps Advisory Group that would provide this information. Furthermore, all Marine advisors in 1965 administratively were carried on the roles of Headquarters Battalion, HQMC. The unit diary entries for many of these Marines do not indicate the assignment to a specific unit, but simply state 'assigned to advisory duty MACV.' MACV strength figures show a total of 98 Marines serving in an advisory capacity on 31 December 1965 throughout Vietnam. (MACV Comd Hist, 1965, Table -11-6). A MACV Joint Table of Distribution for the Naval Advisory Group shows 53 Marines authorized to that command including the Marines in the Rung Sat and serving as advisors to the Vietnamese Marine Corps. (USMACV, US Naval Advisory Group, Joint Table of Distribution, dtd 15Nov65 (OAB, NHD). Presumably 45 Marines were serving as advisors in I Corps.