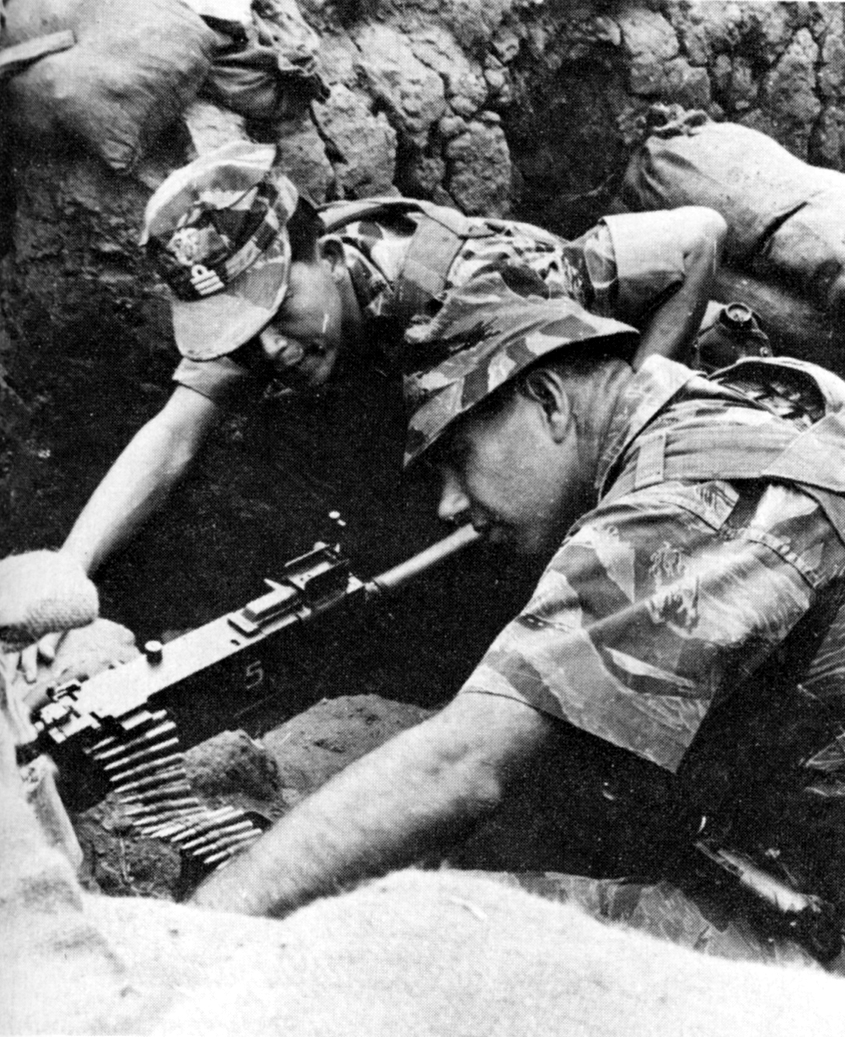 November 1965, the two-battalion Task Force ALPHA achieved a casualty ratio of five to one in favor of the Marines. On 10 November, the 3d Battalion participated with the 2d Battalion, 7th Marines in an amphibious landing from Seventh Fleet Ships during Operation BLUE MARLIN. South Vietnamese Marine morale was on the rise, as evidenced by a declining desertion rate in the second half of 1965.

Many problems still remained especially in logistics, administration, delegation of authority, unit training, and assumption of responsibility by junior officers and noncommissioned officers. Both Colonel Nesbit and his successor, Colonel John A. MacNeil, who relieved Nesbit in September, continued to work on correcting shortcomings.9

The senior Marine advisors, supported by General Westmoreland, objected to a Joint General Staff midyear plan to form a sixth Marine battalion in the fall of 1965. Colonel Nesbit pointed out to General Khang that it would be best to wait until July 1966 'when the present five battalions would be better operationally and some prior planning could be done.'10 Khang accepted the American advice and postponed the formation of the 6th VNMC Battalion until 1966. The South Vietnamese Marine staff and the Marine Advisory Unit, nevertheless, continued to plan for the expansion of the South Vietnamese Marine Corps.

The Marine Advisory Unit also grew in size, corresponding with the expansion and planned expansion of the Vietnamese Marine Brigade. In May, five more billets were added to the advisory unit. These included: an operations officer/task force advisor (major); an amphibious support advisor (major); an administrative specialist (warrant officer); an administrative clerk (corporal); and a supplyman (staff sergeant). In November, MACV authorized two Marine advisors for the planned 6th Vietnamese Marine battalion and a Navy chief hospital corpsman was added as medical advisor. By the end of 1965, the Marine Advisory Unit had an authorized strength of 24 officers, l warrant officer, and 4 enlisted men.*11

The Rung Sat Special Zone (RSSZ) was an area of about 400 square miles, 85 percent of which is dense mangrove swamp. Literally translated. Rung Sat means 'assassins' forest' and was so named because of the bandits and rebels who inhabited its marshlands. It lies along the Long Tao River which connects Saigon with the South China Sea.

Since all Rung Sat operations would be amphibious efforts and the VNN had been assigned primary responsibility for the area, the U.S. Naval Advisory Group requested U.S. Marines to advise the Viet-

*The MACV history shows the actual strength of the Marine Advisory Unit on 31 December 1965 as 25 officers and five enlisted. MACVComdHist 1965, p. 90.