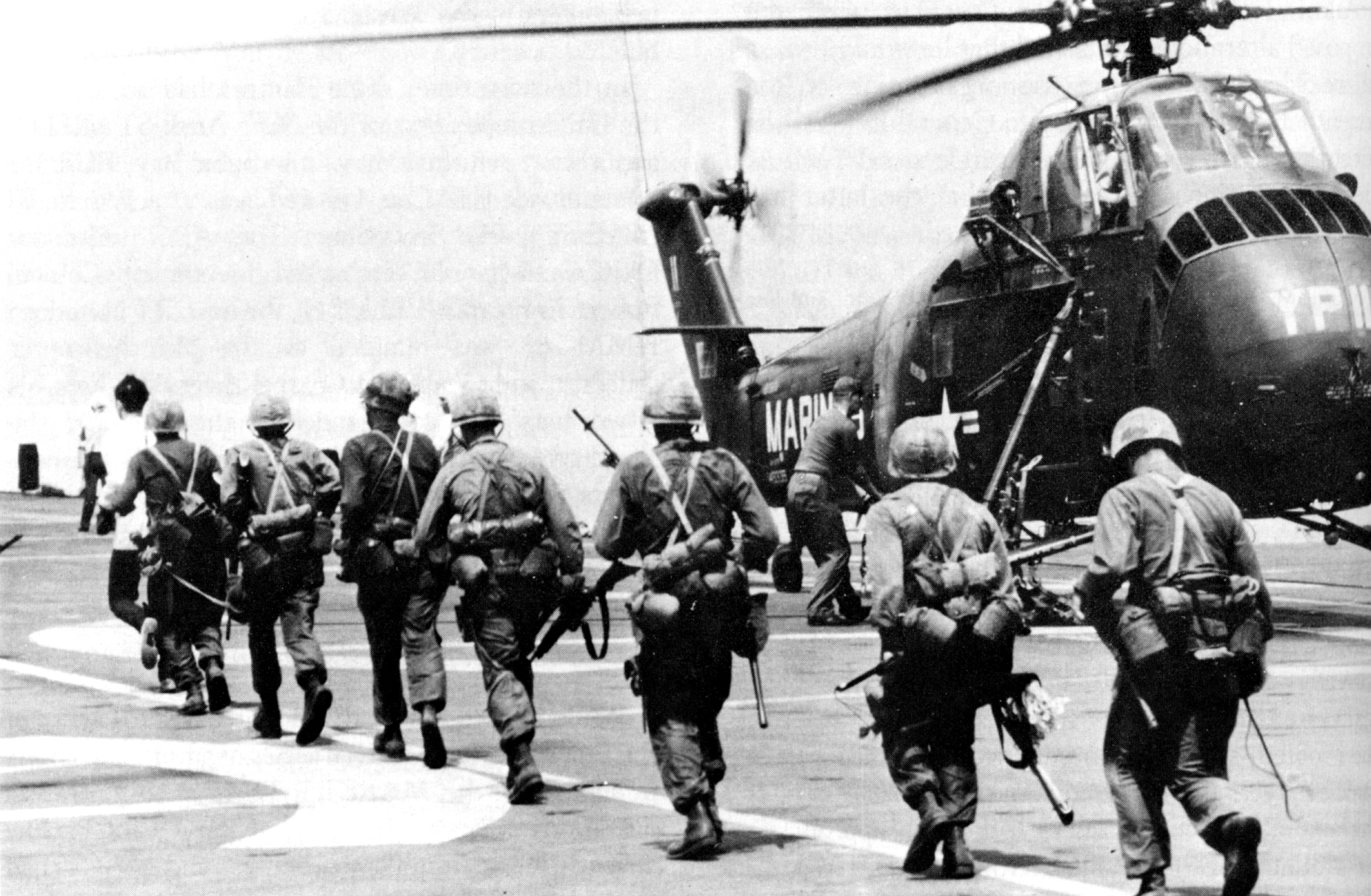 Marines from BLT 2/1 return to their quarters on board the Iwo Jima (LPH2) after debarking from HMM-163's helicopters. They have just completed DAGGER THRUST I, the first of a series of amphibious raids against suspected enemy concentration points, which took place in September 1965 on the Vung Mu Peninsula, 20 miles south of Qui Nhon.

miles north of Nha Trang. The third obective was Tarn Quan, 30 miles south of Quang Ngai City. All three DAGGER THRUST raids were to take place in as brief a period as circumstances permitted.

On 22 September, the command ship USS Estes (AGC 12), Admiral Wulzen's flagship, and the high speed transport USS Diachenko (APD 123) rendezvoused with the ships of the ARG off Qui Nhon. Colonel Edwin G. Winstead, who had relieved Colonel Knapp as commander of the RAMAB/TF-78 after STARLITE, had joined Admiral Wulzen on board the USS Estes and was the designated commander of the landing force, the Marine counterpart to the amphibious task force commander. The task force then proceeded to Chu Lai where the SLF carried out a dress rehearsal for DAGGER THRUST on the 23d. After reembarkation, the task force was joined by two destroyers, the USS Mason (DD 852) and the USS Small (DD 838), and steamed for Vung Mu, the first target.

All three DAGGER THRUST raids were disappointing. During DAGGER THRUST I, the SLF landed over the beach and by helicopter on the morning of 25 September. After searching the peninsula and finding no sign of the enemy battalion that was supposed to be there, the Marines reembarked and sailed for Ben Goi Bay. During DAGGER THRUST II, Lieutenant Colonel Hanifin's BLT did not even land. Three Marine reconnaissance teams from a force reconnaissance detachment, embarked on board the Iwo Jima, transferred to the Diachenko, and then, accompanied by South Vietnamese UDT personnel, went ashore in small boats on the evening of 27 September. One team lost radio contact, but the helicopters of HMM-163 found it.20 Since none of the teams had reported