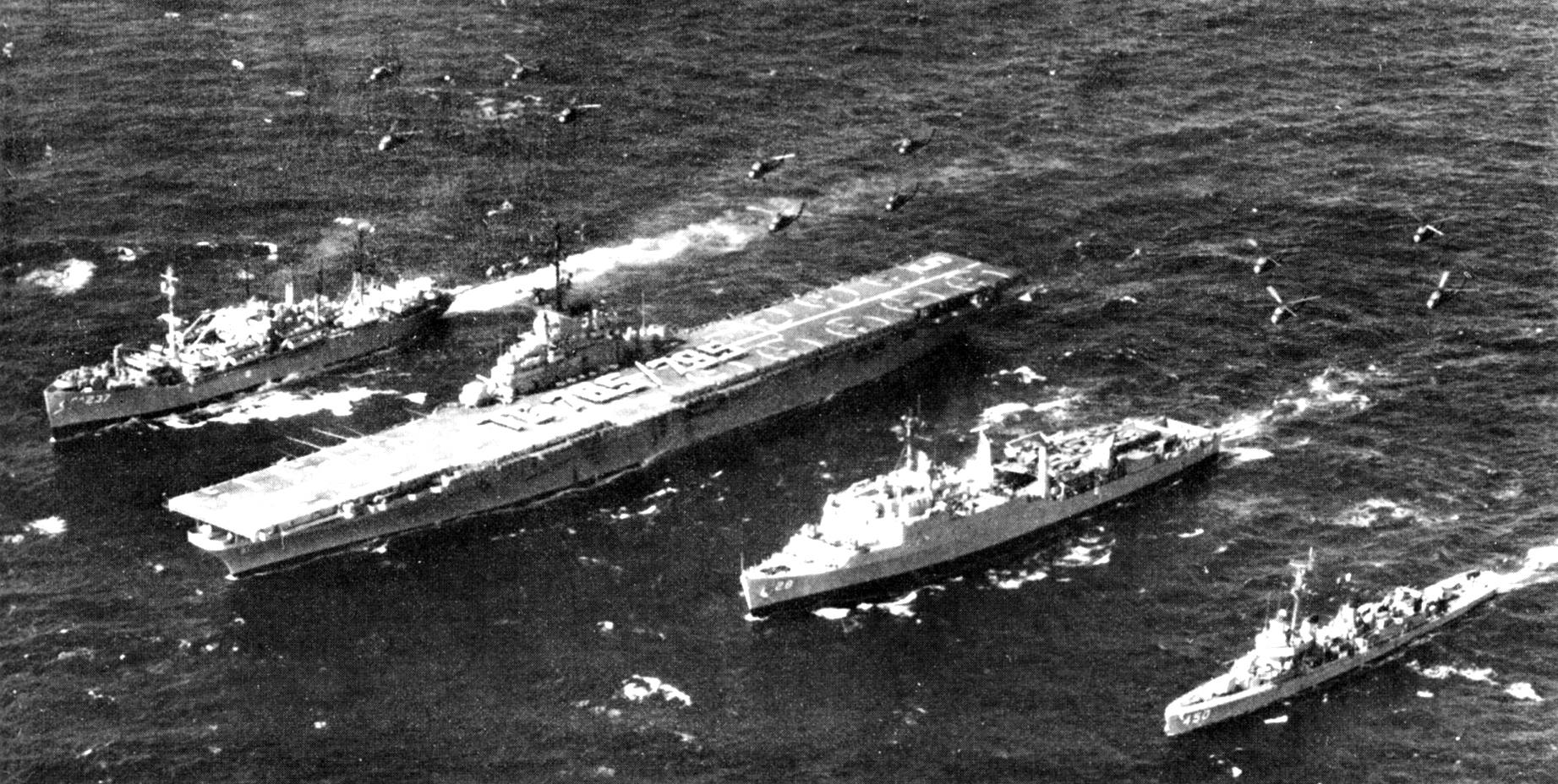 Ships of the Seventh Fleet Amphibious Ready Group {from left to right) the attack transport USS Bexar (APA 237), the amphibious assault ship USS Princeton (LPH 5), the dock landing ship USS Thomaston (LSD 28), and destroyer escort USS Joseph E. Connelly (DE 450) information in the South China Sea with BLT 2/9 and HMM-365 embarked, in March 1965. Helicopters of HMM-365 fly above the ships while the Princeton's crewspellout the groups' designations, TG 76.5 and 79.5, on the flight deck.

that he had discussed the situation with Admiral Johnson and that the latter concurred.

Admiral Blackburn acknowledged that Henderson's primary assignment was as 3d Marine Division assistant division commander, but he still had certain reservations. The Seventh Fleet commander told Krulak that although they both understood the command relationships between CGFMFSeventhFIt, CGFMFPac, and ComSeventh-Fit, other might not. To avoid any misunderstanding, Blackburn suggested:

It must be understood by all concerned that CGFMFSeventhFIt as CTF 79 will be immediately responsible to ComSeventhFIt for planning and operations and, in that context, his primary duty is a CGFMFSeventhFIt rather than as Assistant Commander, 3d Marine Division.8

At this point, General Krulak replied that he did not believe any further discussion of the topic would prove fruitful. He told Blackburn:

As you say, you and I understand the matter. There are only two other key personages involved, Walt and Henderson. I have ensured that they are both familiar with . . . your order. There is no reason that I can see to fear that Henderson will not carry out his instructions as stated in your Op Order. Those instructions are clear, and certainly they are binding.9

With this reply, General Krulak believed that he had "put the whole affair on ice."10

Admiral Blackburn, nevertheless, elected, with the concurrence of General Krulak, to activate a second Marine FMF command within the Seventh Fleet. On 28 June, he ordered the establishment of a Ready Afloat Force within the fleet, which included a Ready Afloat Marine Amphibious Brigade (RAMAB) headquarters. This headquarters, which at this juncture consisted of Marine Colonel Horace E. Knapp, Jr. and a small staff, was assigned the Navy designation TF 78. Admiral Blackburn transferred control of the SLF from TF 79 to TF 78, thus resulting in a change of designation for the SLF from TG 79.5 to TG 78.5.

The Marines were not wholly satisfied with the new command arrangements. There were, in effect, two parallel Marine commands within the Seventh Fleet, which blurred command responsibility. General Henderson, as CTF 79 and CGFMFSeventh Beet, lost direct administrative control of the SLF.