Some measure of the size of FLSG operations is indicated in the following excerpts from its December report:

The FLSG organization had grown to such an extent that in September 1965, General Krulak stated that he had decided to transform the FLSG into a Force Logistic Command (FLC), but this did not happen until 1966.28

A significant construction and engineering effort took place at all three Marine enclaves during 1965. Civilian firms and Seabee units worked on port development, airfield construction, and base development. Marine engineering units not only assisted in these projects when required, but also continued to furnish combat support to III MAF. Colonel William M. Graham, Jr., the III MAF engineering officer, observed: 'For my money, Vietnam in 1965 was an engineers' war and not many other units could satisfactorily fulfill their mission without engineer support.'29 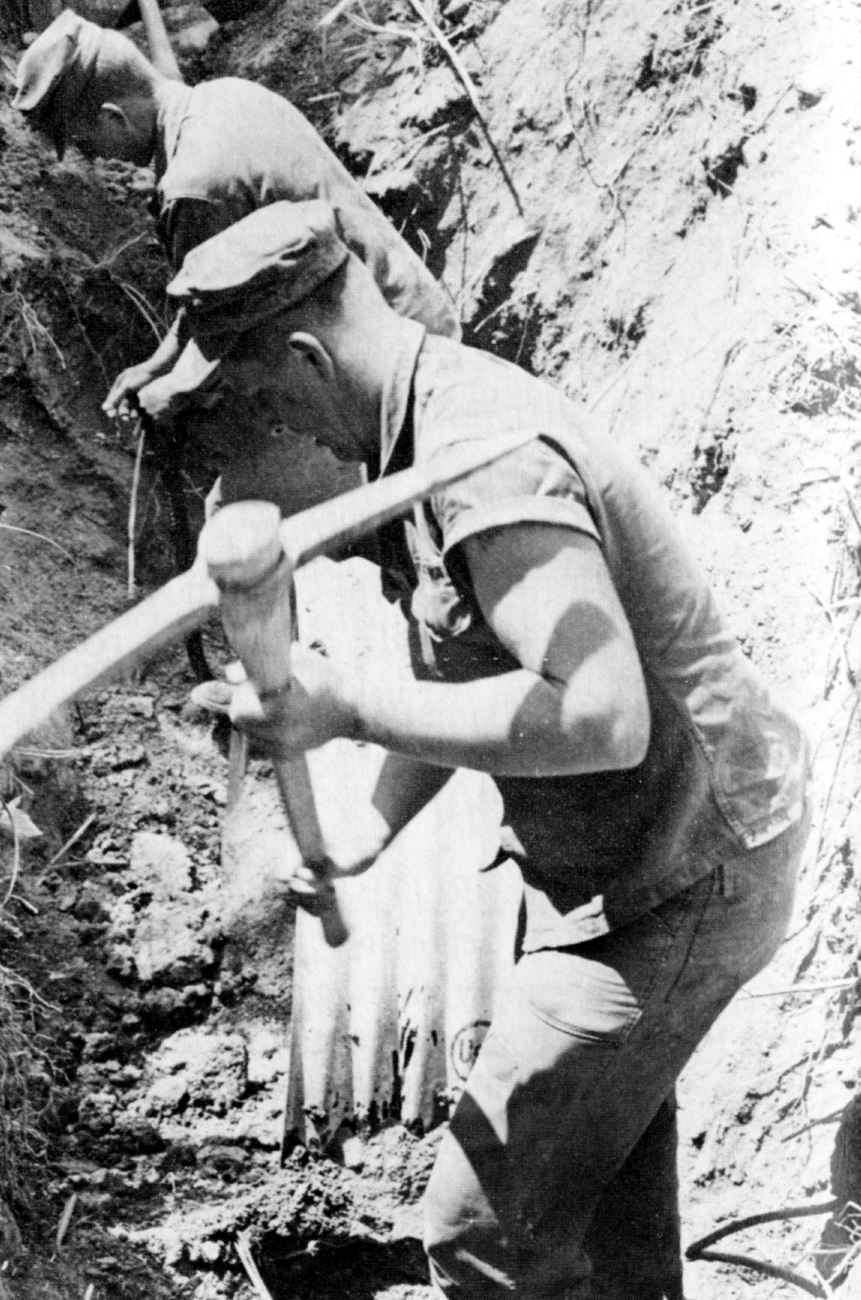 Marine engineers from Company C, 7th Engineer Battalion wield a pick and shovel in building a new road up Hill 327 in March 1965. This was one of the first tasks completed by the engineers.

To build the Chu Lai SATS field, the engineers had to send almost all of their earthmoving equipment from Da Nang to Chu Lai. Roads at Da Nang began to deteriorate rapidly and manual labor replaced mechanization. Lieutenant Colonel Nicholas J. Dennis, who had assumed command of the 3d Engineer Battalion on Okinawa in early May and later in the month arrived in Vietnam, recalled that he questioned the necessity for the transfer of equipment between the two enclaves, but that Colonel Graham 'easily convinced me that the transfer was ordered.'30

Even after the Chu Lai airfield was completed, the tasks facing the engineers were enormous. Major Kaasmann later commented:

*At that time, all depot or 5th echelon maintenance was performed in the U.S. According to FMFPac, 'as the effects of climate and sustained usage amplified maintenance requirements and as forces-in-country steadily grew, this concept became too costly . . . .' For example by the end of 1965, 5,500 items had been evacuated from RVN for repair. To alleviate this situation, some fourth echelon maintenance was moved to South Vietnam in 1966. FMFPac, Marine Forces in Vietnam, Mar65-Sep67, v. I, p. 8-14.