Revision l of 23 September 1963, still in effect in 1965, carried the transition a step further by deleting the 'destroy the enemy' option, and reiterated the 'not equipped for decisive or sustained combat' restriction, but some damage had been done. Misinterpretation of mission and the natural aggressiveness engendered by the demanding physical conditioning program required by reconnaissance units produced a strange analgam of 'fighting' and 'finding' reconnaissance Marines.31

Many senior Marines had been members of special units during World War II, notably the raider and parachute battalions, and all Marines were familiar with their legendary exploits. Of the senior commanders in Vietnam in 1965, four were raider battalion veterans: Major General Walt and three of his regimental commanders, Colonels Wheeler, Dupras, and Peatross. There was bound to be some 'raider' thinking, but the Commanding General, FMFPac, Lieutenant General Krulak, resolutely insisted that 'Combat assault operations, including amphibious raids, are missions to be conducted by rifle companies, rather than reconnaissance units.'32 Nevertheless, during the summer and fall of 1964, Company C, 3d Reconnaissance Battalion had actually trained as the battalion's 'raid' company.33 The die was cast.

By 12 March 1965, Company D, 3d Reconnaissance Battalion had been reconstituted in Vietnam. It was the 9th MEB's reconnaissance company, and, as such, in April it claimed more VC 'kills' than all of the 'in country' infantry units, even through patrolling beyond the Da Nang and Chu Lai TAORS was not authorized until 20 April. The company commander. Captain Patrick G. Collins, recalled: '... surveillance and observation 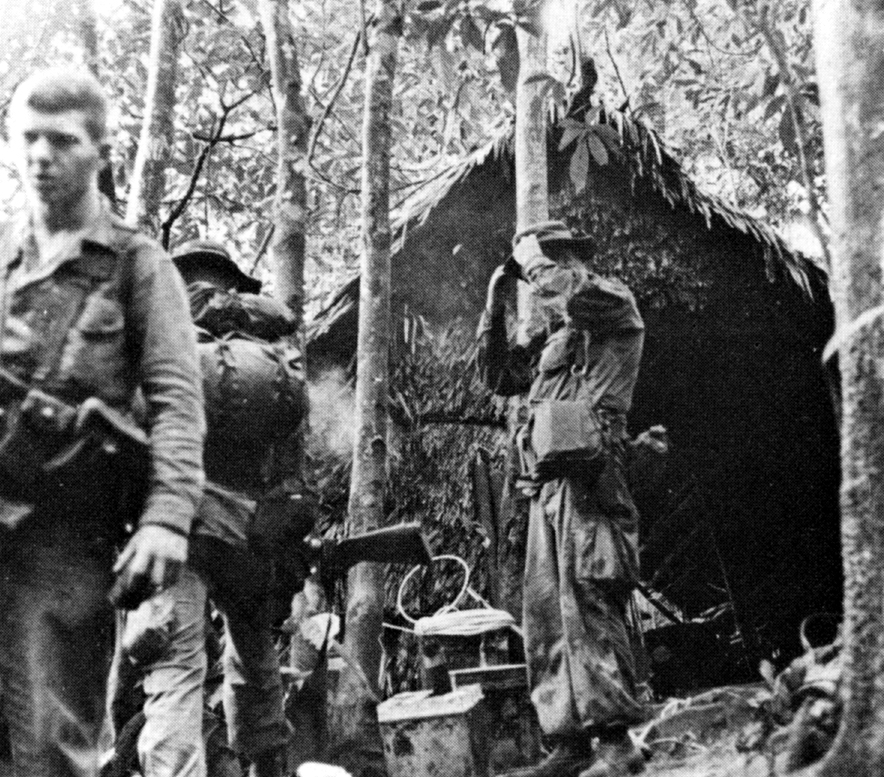 Marines from the 3d Reconnaissance Battalion prepare to make camp during Operation TRAILBLAZER in an enemy base area. The VC had used the hut in the background for food storage, class rooms, living area, and as a medical aid station.