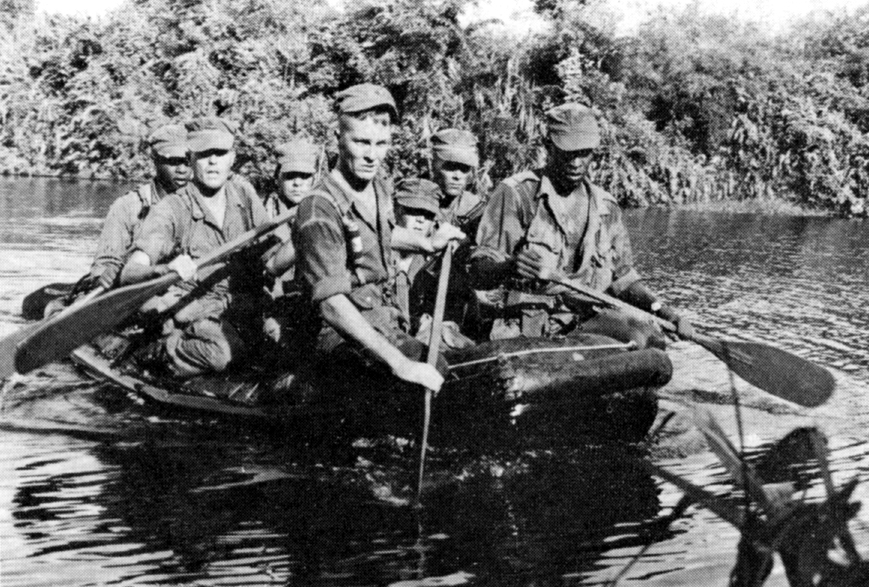 Marines from Company C, 3d Reconnaissance Battalion cross the Nong River near Phu Bai in a rubber raft. The reconnaissance company, attached to the 3d Battalion, 4th Marines, is supporting a battalion search and clear operation.

platoon with BLT 2/1 during DAGGER THRUST II in September had to be extracted because radio contact could not be established. Another unit was landed from a Coast Guard patrol boat on the relatively secure coast near Hai Van Pass north of Da Nang to test communications and control, and this operation, too, was a 'bust.' The company's vehicles were 'down;' supply problems were legion; and the partially developed MAF staff was not designed to deal with such difficulties.22

In effect, the force company became a sixth, albeit smaller, company of the reinforced 3d Reconnaissance Battalion. Although the 'in country' dements of '1st Force' were assembled at last, the assimilation by 'division recon' was not an entirely satisfactory solution; some knotty problems arose.

When the 9th MEB landed at Da Nang on 8 March, a platoon from Company A, 3d Reconnaissance Battalion attached to BLT 3/9, became the first division reconnaissance element to be 'resident' in Vietnam. Other platoons arrived as attachments to BLTs, a platoon from Company B with BLT 3/4, a platoon from Company D with BLT 1/3, and a second Company D platoon with BLT 2/3. Platoon attachments lasted until 13 April, at which time the four 'in country' reconnaissance platoons were regrouped as a new Company D, 3d Reconnaissance Battalion. Captain Patrick G. Collins' Company D operated as the brigade reconnaissance company of the 9th MEB until 7 May, when Lieutenant Colonel Don H. 'Doc' Blanchard, his battalion staff, and the rest of the battalion landed at Chu Lai with the 3d MAB. 'Doc' Blanchard did not stay at Chu Lai very long; on the 12th, he, his staff, battalion headquarters, and Companies A and C moved to Da Nang where they were reunited with Company D. Company B remained at Chu Lai. In the process, Companies A and B were brought up to strength by integrating the Company D platoons which had arrived with the battalion at Chu Lai; there were no longer two Company D elements. Company C was detached from Da Nang to the 3d Battalion, 4th Marines at Hue/Phu Bai on 26 May.

On 13 September, Company C moved again, returning to Da Nang, leaving its 3d Platoon at Hue/Phu Bai still attached to the 3d Battalion, 4th Marines. Battalion integrity was improved somewhat on 19 September by a directive from General Walt which stated that the reconnaissance battalion should be used in general support of the 3d Marine Division.24 Although this measure simplified command and control, the division was still operating from three separate enclaves, and three separate reconnaissance elements were required. On the 19th, reinforcement of division reconnaissance was accomplished by attaching Company C, 1st Reconnaissance Battalion, which had arrived in August as an attachment to the 7th Marines.

During this entire period, the reconnaissance