Coordination of artillery fire, particularly in the densely populated Da Nang TAOR, was a constant source of concern to the artillery commanders and their staffs. Lieutenant Colonel Jack K. Knocke, whose 2d Battalion, 12th Marines supported the 9th Marines, reported in July that 'clearance to fire became a critical factor in the timely delivery of fires.' Artillerymen had to obtain clearances to fire from the Marine fire support coordination centers* (FSCC) at battalion, regimental, and division level and the South Vietnamese district headquarters as well.3

The reduced responsiveness of Marine artillery was a prime topic of discussion in September. The 3d Marine division FSCC, the responsibility of Colonel James M. Callender's 12th Marines,** reported that working relations with the South Vietnamese southern sector were extremely cumbersome. The Marines remarked that slow processing of fire clearance requests by the South Vietnamese resulted in excessive loss of time, except in the case of emergency requests. The ARVN had no centralized coordination center and only one or two senior officers possessed the authority to grant clearance for the Americans to shoot. To improve the situation, General Walt ordered his staff to establish more positive fire support liaison with the ARVN.4 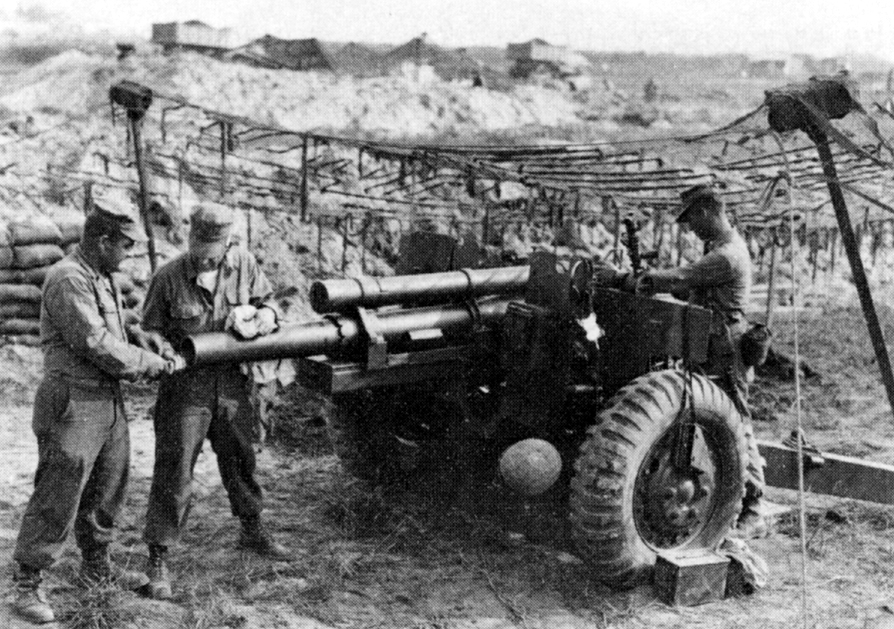 Marines from the 2d Battalion, 12th Marines clean their 105mm howitzer in newly established positions at the Da Nang Airbase in March. The Marines have emplaced the camouflaged netting under standing operating procedures, not because of a North Vietnamese air threat.

During the next few months, cooperation between the 3d Division FSCC and the South Vietnamese military authorities in southern Quang Nam Province gradually improved. In October, the South Vietnamese granted the Marines additional free fire zones in both the northern and southern portions of the Da Nang TAOR.*** Although South Vietnamese clearance still remained slow in the southern sector, the American advisors at Hoi An, in cooperation with the 3d Marine Division FSCC, exerted pressure to improve the situation. By November the division fire support center reported that communications with South Vietnamese officials had improved to the extent that in addition to supporting Marine units, division artillery frequently delivered fire in support of ARVN forces in the southern sector. The expansion of the 9th Marines TAOR in November caused a few problems. Some PF and ARVN units were operating in a portion of the new sector, but these difficulties were easily resolved.5

*A FSCC is a single location in which are centralized communication facilities and personnel to effect the coordination of all types of fire support.

** Colonel Callender became 12th Marines commander on 30 July. Shortly after his arrival, Colonel Pala was sent to Qui Nhon as the senior Marine officer in the area to coordinate activities with the U.S. Army command there. Lieutenant Colonel Walter E. Stuenkel was acting commander of the regiment from 15-30 July. See Col William P. Pala, Comments on draft MS, did 250ct76 (Vietnam Comment File).

***In free fire zones, all targets were considered to be hostile, so Marine batteries did not have to obtain South Vietnamese clearance before firing.