'Happy Valley' in what Colonel O'Connor, the MAG-16 commander called, 'one of the most death-defying feats I've ever seen in aviation.' According to O'Connor, who was Childers' co-pilot for the mission, the 3d Reconnaissance Battalion had completed its operation and wanted to be picked up on a ridge, south of Happy Valley:

The ridge was pretty well covered with timber and foliage. The ground troops had picked out a landing zone that was relatively unobstructed. However the zone had a 45 degree slope and could handle only one aircraft at a time. We approached in flights of three, and two aircraft went in to pick up the troops. Approaching the zone, pilots went in under overhanging trees and hovered on the slope while troops clambored aboard. We took a maximum of five or six each trip, depending on the weight of the troops and the age of the helicopter engine. The whole force of two companies was extracted one helicopter load at a time, as each aircraft penetrated to the slope, and then sneaked out to the valley through overhanging foliage.23*

Marine helicopter support was not limited to Marine operations. Both MAGs ferried South Vietnamese troops into battle and resupplied both ARVN and US Special Forces outposts in the I Corps Tactical Zone. MAG-16's record of air operations for September 1965 provides a sample of the support furnished to both Marines and allied forces: its helicopters flew 15,245 sorties, carried 23,991 passengers, hauled 2,504,663 pounds of cargo, and evacuated 410 wounded troops.24

At Qui Nhon, the Marine helicopter detachment, later replaced by a complete Marine helicopter squadron, flew in support of both South Vietnamese units and U.S. Army troops, as well as the 2d Battalion, 7th Marines. In one operation, GIBRALTAR, seven of the aircraft from the HMM-161 detachment helped helilift the 1st Brigade, 101st Airborne Division into a suspected enemy base area near An Khe on 19 September. First Lieutenant Gary W. Parker, a member of HMM-161, recalled that the first lift went without incident:

And I remembered thinking to myself that this looked like another cake walk; however, on the second wave we started receiving automatic weapons fire which was extremely accurate and soon took its toll on all the helicopters, both Army and Marine Corps. In a very short time the air was full of chatter from the pilots reporting hits upon their aircraft and the locations of the enemy gun emplacements. ... it became quite obvious that we had landed in the middle of a fairly large and well armed enemy force; more firepower was needed . . . .25 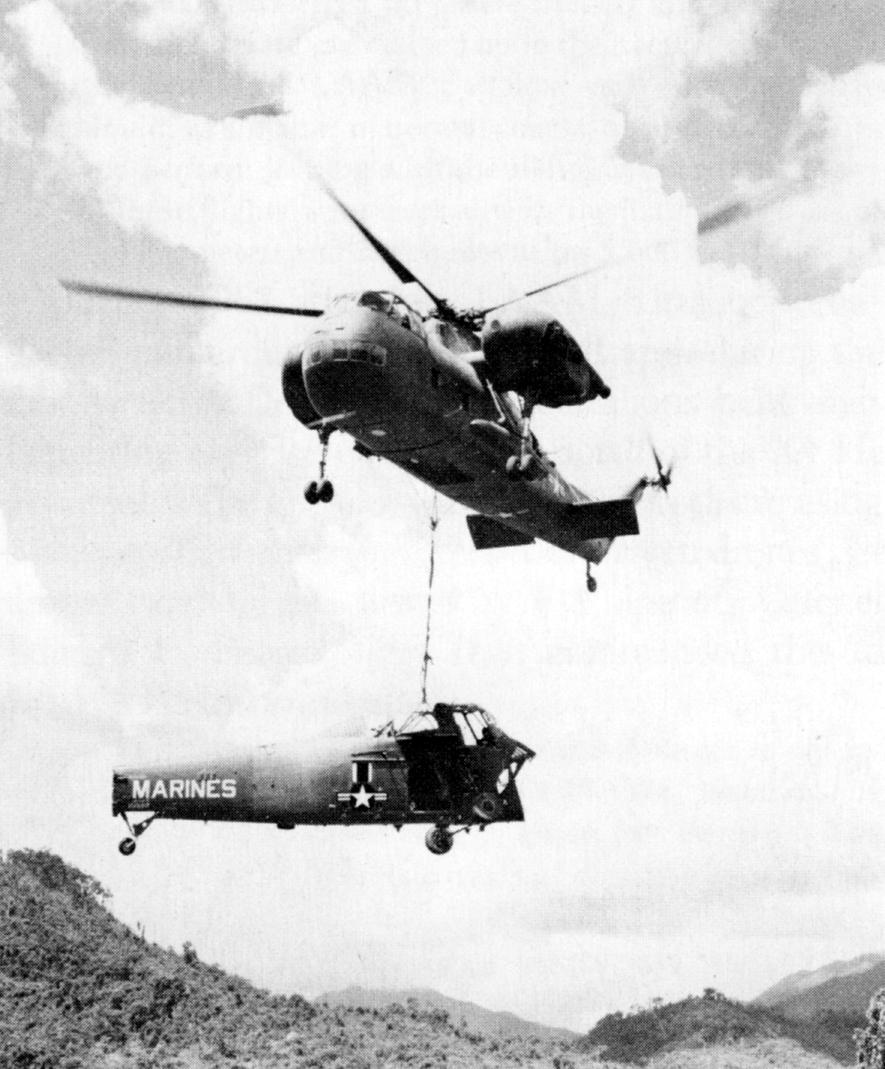 A Marine CH-37 heavy helicopter lifts a damaged UH-34 helicopter from a combat zone. Ground crewmen dismantled the damaged aircraft so it could be carried back to Da Nang.

All seven of the Marine aircraft sustained battle damage. One aircraft was downed, but its crew was rescued by another helicopter. The downed craft was recovered the following day. The Marines counted 57 bullet holes in the seven UH-34s and Parker later wrote: 'We all felt that we had been very lucky that day.'26**

The intensity of helicopter operations naturally caused maintenance problems. By August the UH-34s had exceeded planned flying hours and had to be overhauled four to six months earlier than they would have been under normal operating conditions.

*See Chapter 11 for an account of the reconnaissance operation.

**During Operation GIBRALTAR, the 101st Brigade aborted the helilift after two companies of one battalion had been helilifted into the objective area. Another force of U. S. troops and ARVN rangers was helilifted into another landing zone 1,500 meters to the east and linked up with the two stranded companies the next day. The allies killed 226 VC and captured nine while sustaining losses of 13 dead and 44 wounded. MACV Comd Hist, 1965, p. 167.