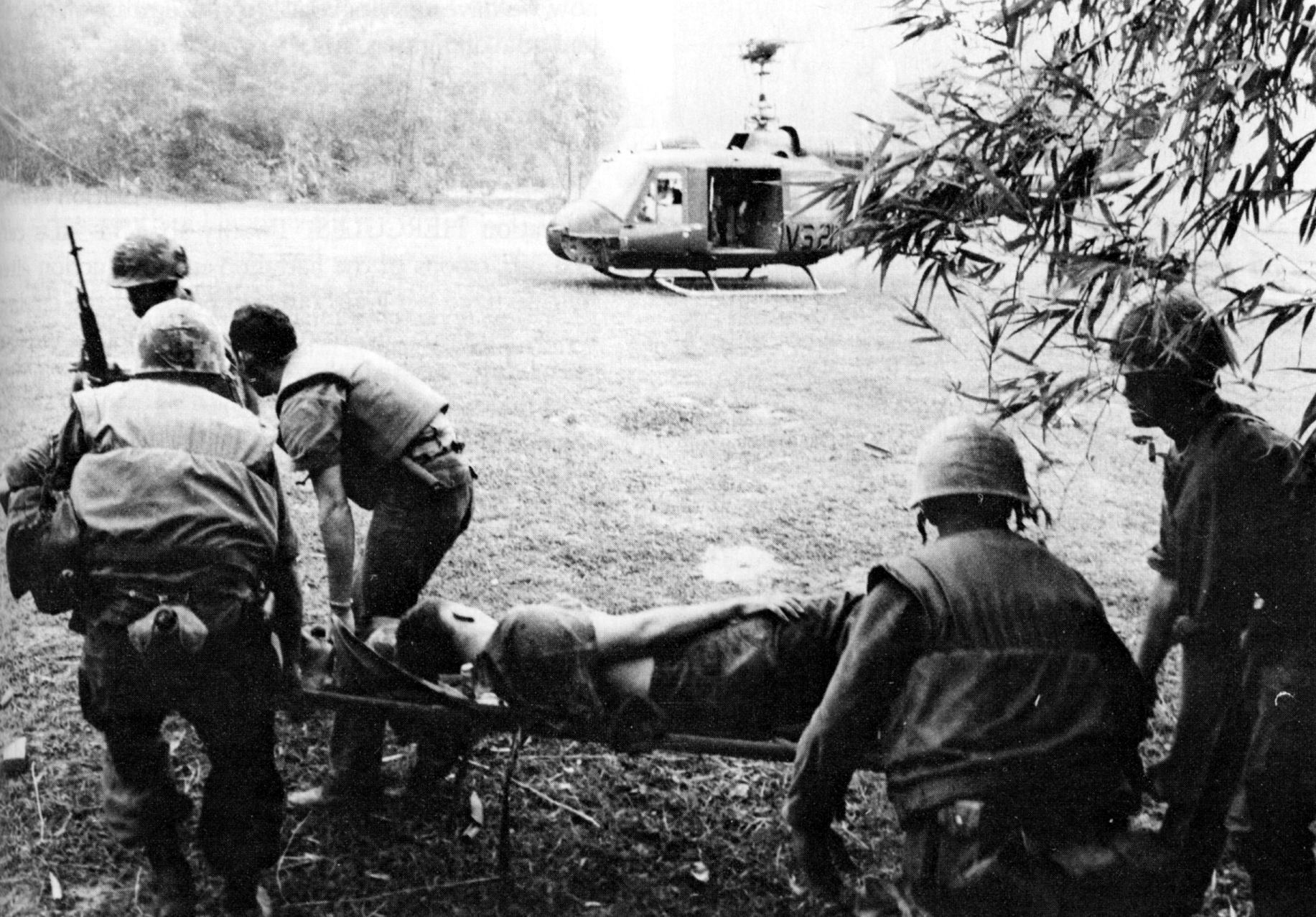 Marines carry a wounded Marine to an evacuation helicopter. A Navy Corpsman (at left without helmet) helps to lift the stretcher.

One week before the operation, appropriately labeled Operation MIDNIGHT, Major Marc A. Moore, Cement's S-3, approached Childers about the feasibility of conducting a night heliborne operation in the valley. The battalion had received information that approximately 50 VC entered the villages in the valley after dark and left the next morning before dawn. The squadron commander studied the problem and decided it was possible for his helicopters to carry out the mission, under favorable weather and moonlight conditions.

The battalion and squadron staffs then worked out the details. They planned for artillery preparation of the landing zone, after which the helicopters would land the troops under the light of flares dropped by Air Force C-123 Providers. A Navy gunfire ship, lying offshore, was to fire star shells to provide wind drift data for the Air Force flare drop. By 12 August, preparations were complete and Lieutenant Colonel Childers told his pilots at the preflight briefing: 'You have the dubious distinction of being the first men to fly a nightime combat helicopter strike.'20*

To ensure surprise, the nights before the actual landing Marine artillery and the Navy gunfire ship fired missions in the same general area and at the same hour as the proposed landing. The night of 12 August, the artillery slightly increased the intensity of its fire for the landing zone preparation and the

*This was an overstatement. HMM-362, under Lieutenant Colonel Archie J. Clapp, had helilifted ARVN forces in a night assault on the Plain of Reeds in the Mekong Delta in 1962. See Whitlow, U. S. Marines in Vietnam, 1954-64, Chapter 5. MajGen William R. Quinn observed that HMR-161 'made the first tactical airlift at night in Korea.'' MajGen William R. Quinn, Comments on draft MS, dtd 30Sep76 (Vietnam Comment File). Night helicopter medical evacuation flights by VMO-6 were almost routine in the last year of the Korean War, one reason the squadron was awarded a Presidential Unit Citation.