cannon fire; the F-8s were not equipped to carry bombs.

Two days later, Oriskany sailed northward to a position 70 miles off Da Nang known as YANKEE STATION. That day, the 212 pilots flew their first suppression escort for U.S. Navy A-4s of CVW-16 attacking targets south of Hanoi. By 11 June, the F-8Es had been modified. After that date VMF(AW)-212 was capable of carrying MK82 (570 pound), MK83 (983 pound), MK84 (1,970 pound), and MK79 (napalm) bombs. Interestingly, some of the pilots had never trained for dropping bombs with the F-8s and consequently their first bomb drops were made in combat.

The Oriskany rotated between YANKEE and DIXIE STATION, established 16 May 100 miles southeast of Cam Ranh Bay, with brief visits to the Philippines for the next seven months. During that time, Ludden's squadron was credited with flying 3,018 combat hours and l,588 combat sorties; 1,058 hours and 595 missions were flown over South Vietnam. Crusaders of the unit were battle damaged on 26 separate occasions; on 5 November one F-8E was lost to enemy ground fire.

When the squadron struck the Hai Duong rail and highway bridge on 5 November 30 miles east of Hanoi, enemy antiaircraft fire hit Captain Harlan P. Chapman's plane. Forced to eject, Chapman parachuted safely but was captured immediately. Chapman was awarded the Distinguished Flying Cross for the mission and was promoted to lieutenant colonel while a prisoner-of-war. He was repatriated to the United States by the North Vietnamese on 12 February 1973. Captain Chapman commented that the CVW-16 commander, Commander James B. Stockdale, USN, had been shot down in September 1965 and that 'Lieutenant Colonel Ludden as the senior squadron commander took command of CVW-16 for about two months, making him one of the few Marines to command a CVW.''19

In November, Oriskany completed its WestPac deployment and sailed for the United States. Fifteen days later on 10 December, Ludden led his Crusaders back to MCAS, Kaneohe Bay, while the rest of the squadron unloaded at Pearl Harbor. VMF(AW)-212 transferred to the control of the 1st Marine Brigade from CVW-16. 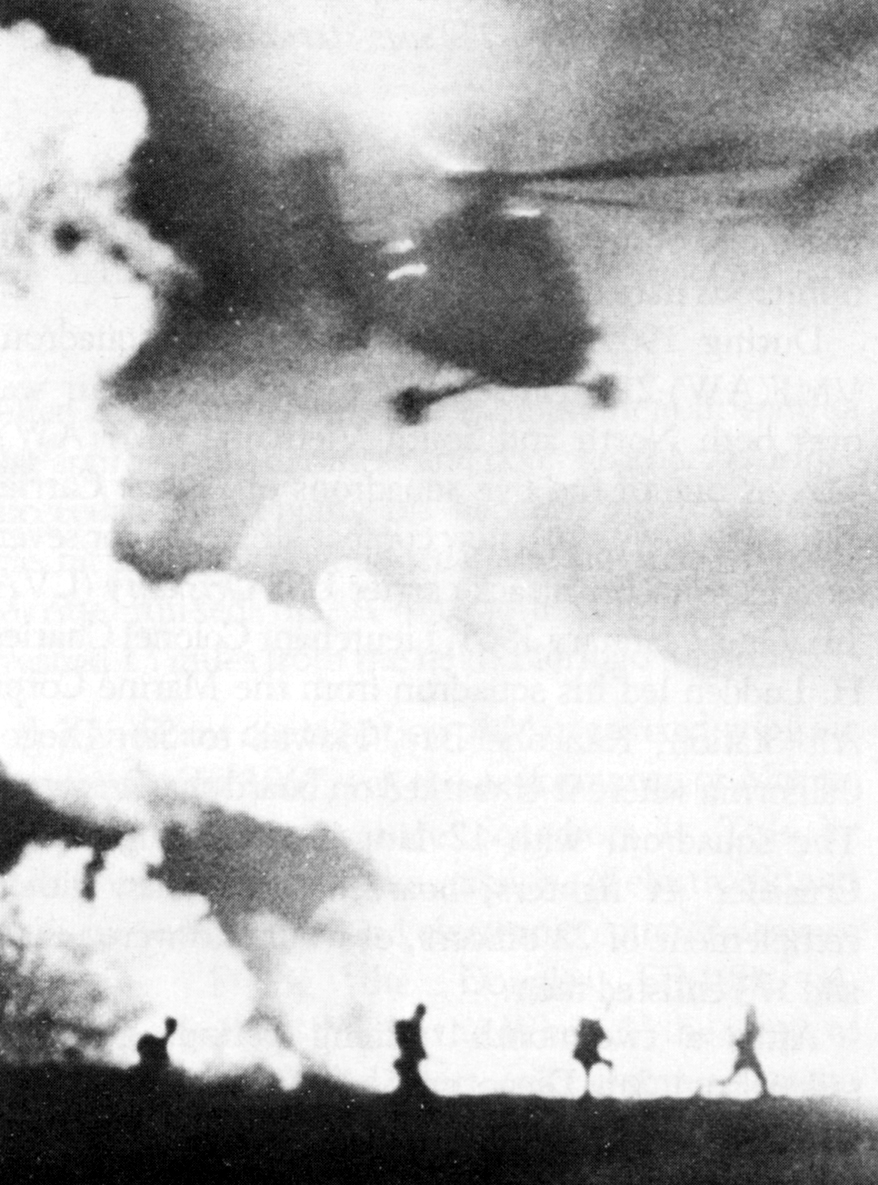 A helicopter from HMM-361 lands troops from the 2d Battalion, 3d Marines under flare light in Operation MIDNIGHT. This was the first night helicopter assault for the Marine air/ground team in Vietnam.

A Marine helicopter squadron had been operating in Vietnam since 1962. The Marine UH-34s furnished the South Vietnamese with mobility and logistical support. To the individual Marine infantryman in 1965, the helicopter was the vehicle which carried him into battle, provided him with rations, ammunition, and even close air support, and carried him out of battle, dead or alive.

During the July-December period. Marine aviators and ground commanders experimented with new helicopter tactics. One of the more innovative of these experiments occurred on the night of 12 August 1965. Lieutenant Colonel Lloyd F. Childers' HMM-361 and Lieutenant Colonel Clement's 2d Battalion, 3d Marines tried their experiment in an area 10 miles northwest of Da Nang known as Elephant Valley, a narrow river plain between some of the steepest mountains in I CTZ.