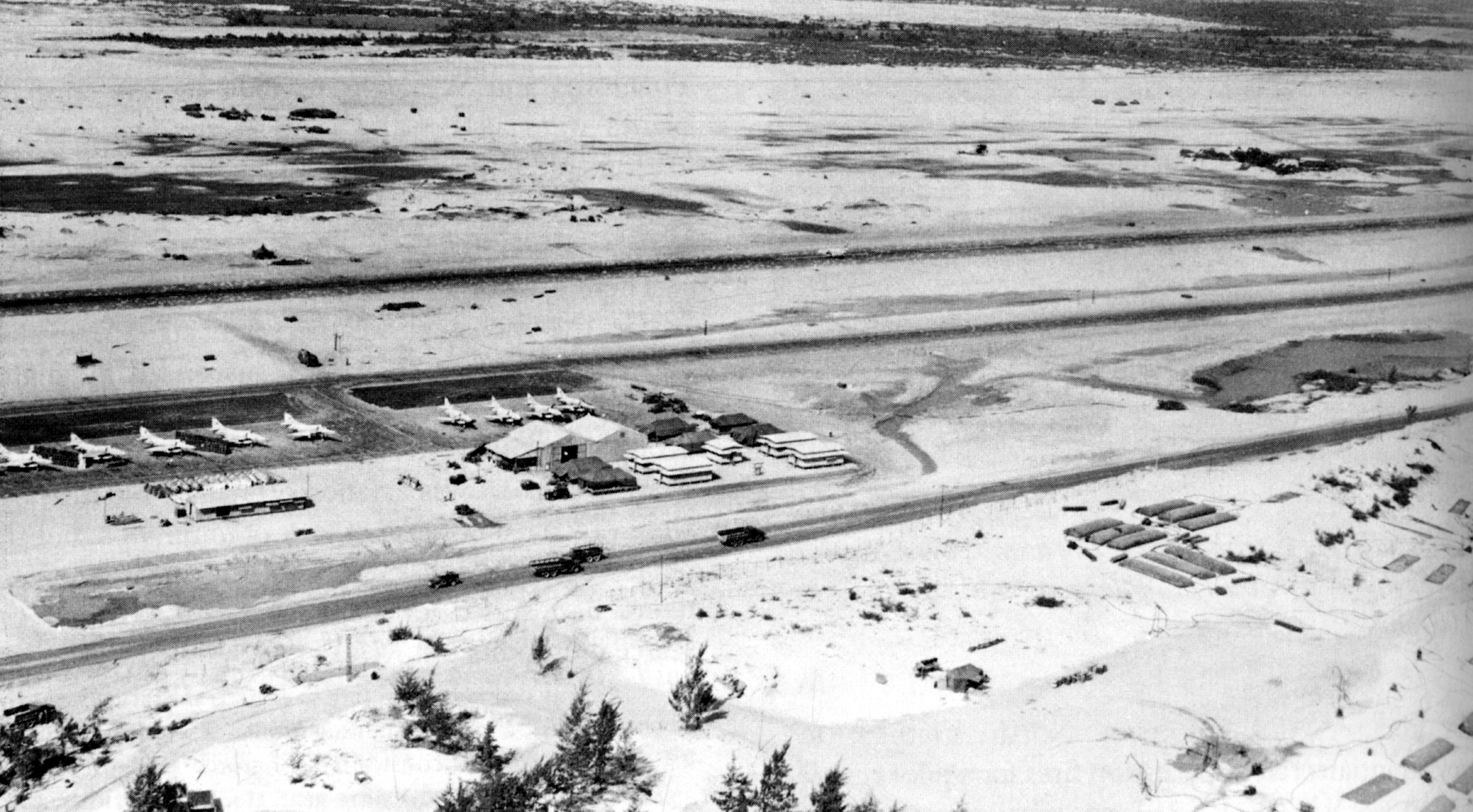 An aerial view of the Chu Lai SATS field showing the A-4s of MAG-12 parked between temporary revetments. The SATS runway was reduced to 4,500 feet for periods of time in November and December.

rolled in on the enemy machine gunners in spite of fast approaching darkness and poor weather. Eldridge succeeded in dropping his napalm, but his aircraft was hit and he was wounded in the leg. The wounded Marine nursed his A-4 toward Chu Lai, but it crashed 13 miles from the field. Eldridge was killed.17

The primary purpose of these flights was to identify and jam enemy fire control radars. During 1965, the VMCJ-1 'Whales' flew 791 sorties in support of strikes over North Vietnam and Laos.18 Photo reconnaissance missions were flown in Chance-Vought RF-8As, the photoplane version of the Crusader fighter.** In this role, the pilots of VCMJ-1 supported III MAF, as well as the Navy and Air Force, by supplying aerial photos which pinpointed targets in South Vietnam, Laos, and North Vietnam. ***

*The EF-10B was a modified version of the Navy F3D Skynight, a two-engine jet night-fighter aircraft first built in 1956.

**The Crusader was a swept-wing, single-jet fighter, first built in 1958.

*** Lieutenant Colonel Otis W. Corman, the squadron commander, later wrote: 'During May and June the EF-10B were operated at 300 percent of normal utilization. Due to the limited total of EF-10B resources (both aircraft and spare parts) General McCutcheon directed that the utilization rate be limited to 200 percent or 60 hours per month per plane. To achieve this, a 1st MAW liaison officer was assigned to MACV's electronic warfare coordinating authority and VMCJ-1 was tasked to support Air Force and Navy operations in only high threat areas; i.e. strikes inside the SA-2 missile envelope complex.' Col Otis W. Corman, Comments on draft MS, dtd [Nov 75] (Vietnam Comment File).