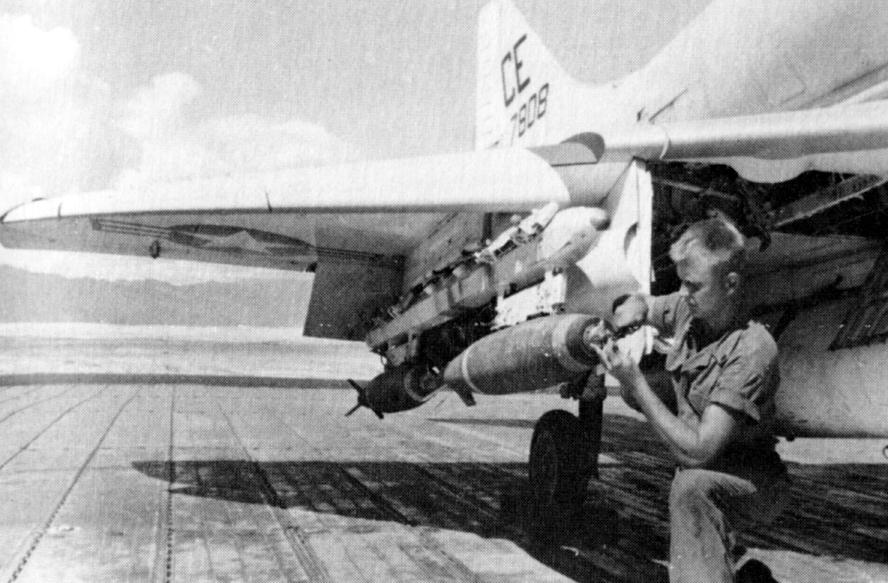 A ground crew member arms the bombs on a Marine A-4 Skyhawk at Chu Lai. The A-4s could carry up to 3,000 pounds of ordnance.

4Bs from VMFA-531 over North Vietnam to provide antiaircraft suppression fires for a pilot rescue mission. A USAF RF-101 reconnaissance aircraft was down. Arriving at the crash site just north of the DMZ, the Marine pilots joined Air Force F-105 pilots attacking NVA antiaircraft gun positions while the rescue was being completed. This flight was the first occasion of Marine aviators conducting a combat strike in North Vietnam. In the last half of 1965, Marine F-4Bs flew 87 combat air patrols over North Vietnam.

On 6 December, the 1st MAW again expanded its participation in the air war when Marine aircraft struck enemy infiltration and supply routes in Laos. These operations, coordinated by the 2d Air Division, were part of the STEEL TIGER program, started by the Air Force and Navy in the spring of 1965 to reduce the enemy flow of men and material through southern Laos. From 6-31 December, MAG-11 aircraft flew 140 sorties and MAG-12 planes flew 159 sorties over the Laotian panhandle.12

As Marine fixed-wing operations increased, a new problem appeared with the onset of the monsoon season. This was especially true at Chu Lai, where the SATS field had to undergo extensive renovation which reduced the runway there to 4,500 feet for periods of time. Normally, this was enough room for operations when using jet-assisted takeoff and mobile-arresting gear for takeoffs and landings, but the monsoon weather made landing and takeoff conditions at the base marginal. Low ceilings, high winds, and heavy rains from 25-27 November caused all missions to be cancelled.13 Fortunately, III MAF was able to use the TPQ-10 radar to guide the Phantoms and Skyhawks to their targets once the planes were airborne in spite of the bad weather. Although the number of missions flown increased in December, over 600 scheduled sorties were cancelled because of poor flying conditions.14

There were other frustrations for the Marine pilots beside the monsoon weather. During a one-week period in October, MAG-11 suspended all flights because salt water accidentally mixed with the group's fuel supply, but the largest problem for the Marine aviators was aviation ordnance. No missions were cancelled because of lack of munitions, but the pilots were not always able to use the type of ordnance best suited for a specific target. To preserve scarce munitions, 1st MAW policy stated:

. . . only ordnance required to destroy the target would be expended, and all remaining ordnance would be returned unless doing so constituted a hazard, as is the case in landing into the arresting gear at Chu Lai with napalm tanks.15*

In 1965, there were three occasions of operational aircraft loss, resulting in the death of Marine aviators. Two crashes occurred on the same day, 26 October, when two F-4Bs returning from a combat mission crashed into the side of Monkey Mountain. One of the Phantoms had reported engine trouble before the crash. Both crews of the two aircraft were killed.16 The third incident occurred on 29 December south of Chu Lai. An A-4 from VMA-211, piloted by 1st Lieutenant Thomas F. Eldridge, was escorting a flight of helicopters attempting to resupply a besieged South Vietnamese district headquarters. As the helicopters approached, the enemy opened fire with three heavy machine guns. The Marine lieutenant

* Colonel Gray wrote: '1st MAW policy did state that only ordnance required would be expended and the remainder of the load returned to base. Statistics to bear on this would be impossible to obtain, but from experience if on a mission there was anything to bomb 'at' the ordnance would be expended many times in the interest of practice. I don't think we really brought home nearly as much as we might have wanted people to think.' Col Roy C. Gray, Comments on draft MS, dtd 28Sep76 (Vietnam Comment File). The Office of Air Force History in its comments observed: 'During 1964-65, MACV rules severely curtailed a pilot's choice of alternative targets; established certain free-drop zones; and required [pilots] to jettison all ordnance in designated jettison areas before landing for safety reasons. ...' Office of Air Force History, Fact Sheet: Expenditure of Ordnance, Jan 77 (Vietnam Comment File).