than Marine units. During the battle of Ba Gia in June 1965, the A-4s of Colonel Noble's MAG-12 took off on their first night launch from Chu Lai to provide support for the embattled outpost 20 miles to the south. For three days, the MAG-12 A-4 Skyhawks and the F-4B Phantom IIs of Da Nang-based VMFA-513 bombed and strafed the enemy positions around the clock. Four months later, the F-4Bs of Colonel Anglin's MAG-11 and the A-4s of Colonel Brown's MAG-12 flew 59 sorties in support of U.S. and South Vietnamese troops at the Plei Me outpost, 20 miles southwest of Pleiku in northwestern II Corps. The attack against the outpost resulted in a major engagement, the Battle of la Drang Valley, in which the U.S. Army's 1st Cavalry Division (Airmobile) killed l,238 enemy in 12 days.

In the 3d quarter of 1965, the two Marine air groups flew 4,614 sorties in support of Marine units and 1,656 sorties for the ARVN. Six hundred thirty-five of these sorties in support of the ARVN were dose air support attacks supporting friendly forces engaged in close combat.8 In the month of December, in spite of poor flying conditions, 1st MAW fixed-wing aircraft still flew 119 close air support missions for ARVN troops.9

Marine attack aircraft performed several other duties in addition to their primary task of close air support. Both the F-4Bs and A-4s flew direct air support missions. Similar in some respects to close air support, these strikes were not conducted in the immediate vicinity of friendly lines and did not require integration with the ground unit's fire support plan, although coordination did take place at an echelon of command above that of the maneuver unit. The aim of the direct air support strikes was to isolate the enemy from the battlefield and destroy his troops and support bases.* 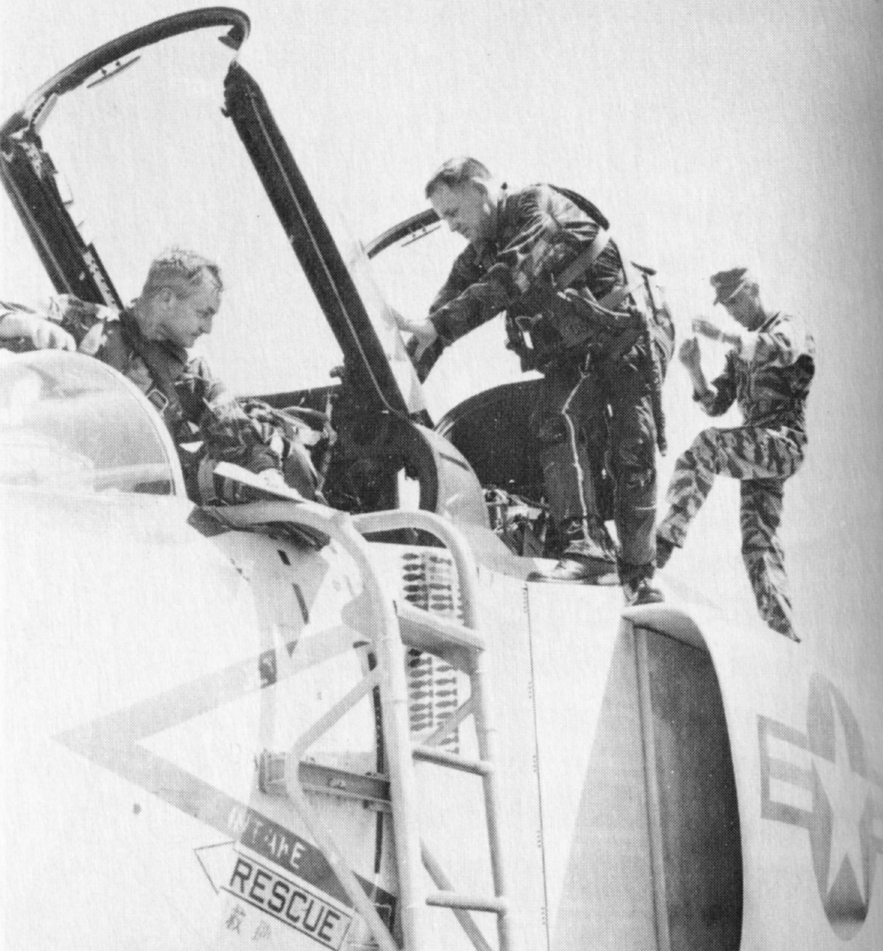 Besides landing zone preparation, the attack aircraft from Da Nang and Chu Lai were called upon to provide armed escort for helicopters. Lieutenant Colonel Norman G. Ewers, who commanded HMM-163 in 1965 and whose squadron developed a close working relationship with VMFA-531, remarked, 'Some people commented that using F-4s to escort helos was like driving tacks with a gold plated sledge hammer. That may be. All I know is that it worked, and worked very well.'11

While most of the combat strikes of the 1st Marine Aircraft Wing were flown within South Vietnamese air space, Marine pilots also crossed the DMZ. On 6 May, Captain Don K. Hanna led a flight of four F-

* Strictly speaking, this definition of direct air support applies to deep support missions. The Marines used the term direct support, as defined in the text, to differentiate between interdiction missions and ground support missions. Even so, Colonel Gray remarked that the distinction between close air and direct support was at times vague since, 'The powers to be always wanted missions logged as close air support where possible to weigh in the right direction when assessing Marine air support operations.' Col Roy C. Gray, Jr., Comments on draft MS, 28Sep76 (Vietnam Comment File).