they agreed to do so only if the Marines would protect their autumn harvest. Lieutenant Colonel Clement accepted this condition and fulfilled his promise in September.17On the 15th, the battalion intelligence officer, Captain Lionel V. Silva, discussed plans for the harvest with the district chief. A Marine helicopter flew a group of farmers from Le My to their fields near their former homes to survey the crops. By 18 September the battalion and South Vietnamese had completed preparations and the harvest began in earnest on the next day. During the period 18-23 September, the Marines moved approximately 150 villagers to their fields for the harvest. Marine helicopters and LVTs brought over 12,000 pounds of harvested rice into Le My, as well as some civilians who had decided to resettle there. The helicopters flew 14 sorties while the LVTs logged 800 miles in this GOLDEN FLEECE operation.*

In October, rice protection operations were extended to two other areas of operations. At Da Nang, Lieutenant Colonel Hatch's 1st Battalion, 1st Marines, in the southwestern portion of the Da Nang TAOR, assisted the villagers of Hieu Due District in their harvest of over 71,000 kilograms of rice. During this same month, Lieutenant Colonel Fisher's 2d Battalion, 4th Marines conducted two operations labeled HARVEST MOON** in 'Western Valley,' five miles west of Chu Lai airfield. The village chief of Ky Ha (2) reported that the battalion protected the harvesting of over 102,000 kilograms of rice.18

On 26 November, Lieutenant Colonel Clement submitted a study for General Walt evaluating the GOLDEN FLEECE Operations.*** Using figures furnished by the Vietnamese village chiefs, he declared that, '512,410 pounds of rice, threshed, was denied the VC. At the accepted rate of 1.5 pounds per person per day, this could have subsisted 1,900 VC for the six months until next harvest.'19 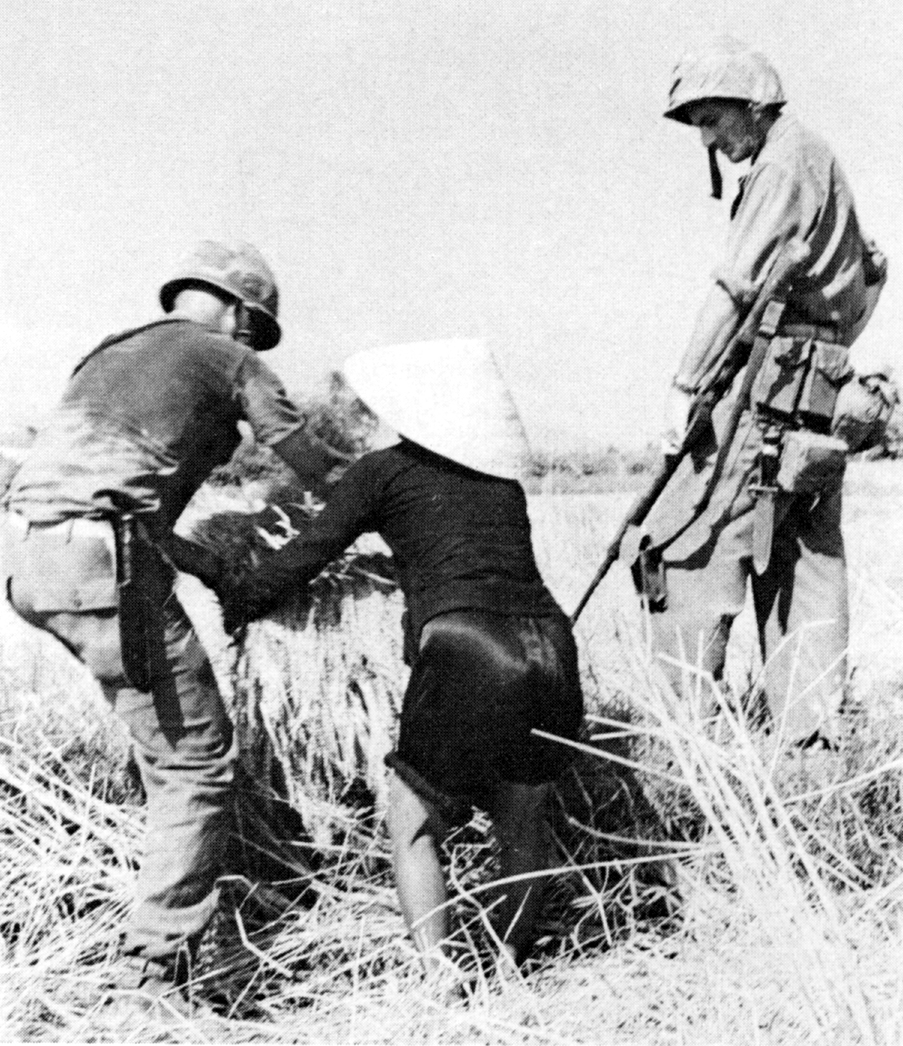 A Marine officer assists a South Vietnamese woman gather the rice into a shock while another Marine stands guard during Operation GOLDEN FLEECE.

Clement concluded that the operation was both a psychological and economic success, it had kept the rice in the hands of the people while denying it to the VC. General Walt, confident of further success, ordered that plans be drawn up to implement GOLDEN FLEECE n for the spring harvest.

Cordon and Search: The Seeds of COUNTY FAIR and Population Control

During this period, III MAF started what was to become the COUNTY FAIR technique, a cordon and search operation with psychological overtones. Although the 9th Marines was to give the technique its name, the concept evolved from the experience of several units and techniques they had developed to meet local conditions. In the 3d Marines TAOR, southwest of the airfield, several operations were conducted, initially by the 1st Battalion, 3d Marines and later by the 1st Battalion, 1st Marines, during which one company would surround a hamlet while another would search it for VC. In the Le My area, the regiment's nothern TAOR, the 2d Battalion, 3d

* The battalion did not call its operation GOLDEN FLEECE, but this name was soon adopted to refer to all rice harvesting protection missions.

*** Lieutenant Colonel Clement was detached from 2/3 on 10Nov65 and assigned to the III MAF G-3 Section.