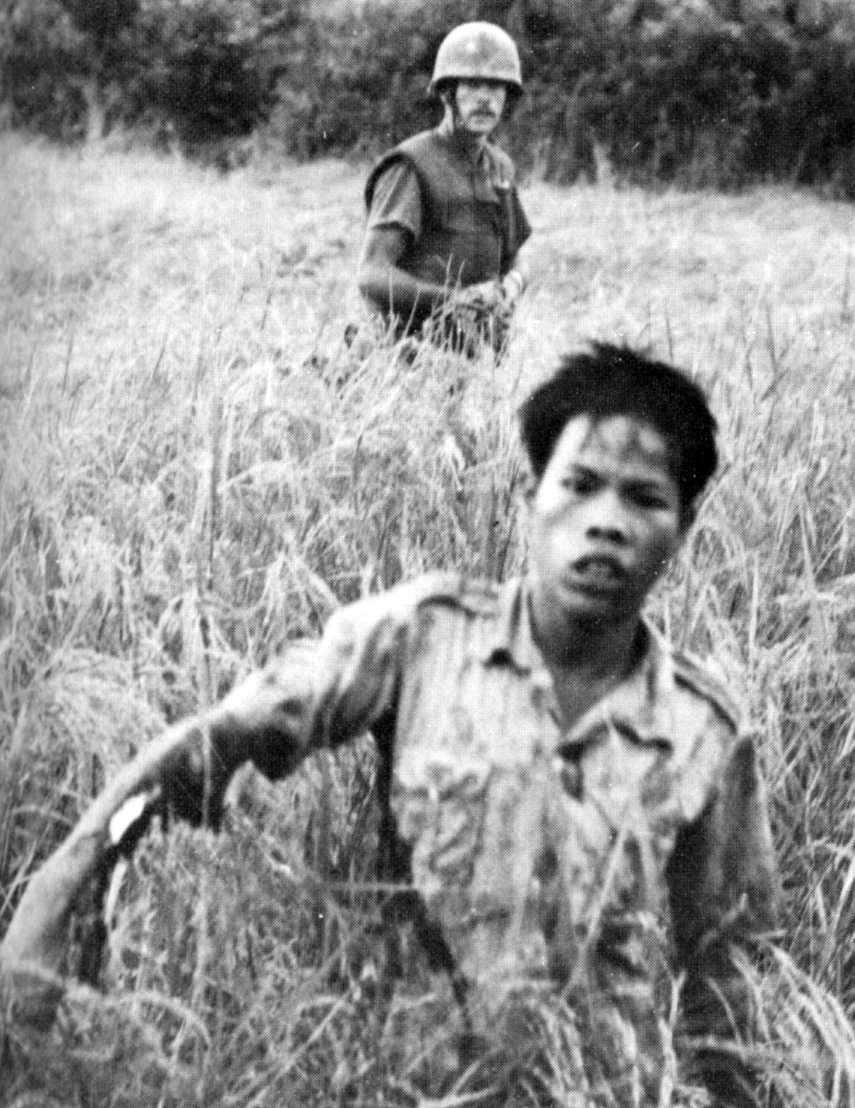 A Marine guards a Viet Cong prisoner during Operation GOLDEN FLEECE in September 1965. The Viet Cong had taken a percentage of the rice harvest for their own use for years in this area south of Da Nang prior to the arrival of the Marines.

In mid-August, the battalion was released from duty as the airfield defense battalion and was assigned to the area south of Marble Mountain bordering the South China Sea. Operating from a central base area, Lieutenant Colonel Ludwig sent out small patrols to bait the VC. When these units made contact, a mobile reaction force, composed of Marines mounted on tanks, Ontos, and amtracs, sped to the point of contact. At the same time, the battalion commander attempted to enlist each of the four village chiefs in his area of operations to support his efforts against the Viet Cong.13* The chiefs were wary until the Americans proved themselves, which did not take long. On 29 August, the battalion defeated a Viet Cong company, killing 12, capturing 12 more, and dispersing the remainder.

Impressed by this action, Huynh Ba Trinh, chief of Hoa Hai village, contacted the battalion intelligence officer the next day and reported that his villagers had told him that more than 30 of the enemy had been killed in that engagement.** Trinh then asked that the battalion provide security for the villagers when they began harvesting their rice on 10 September. The chief explained that the VC came each year and took what they considered to be their share of the harvest. According to South Vietnamese and Marine intelligence sources, the Viet Cong had already moved one battalion and several companies into the 9th Marines TAOR to accomplish their rice collection.14 Trinh proposed that the Marines help the farmers bring the rice to central collection points where it could be stored in warehouses. He would then give the people receipts for their crops and distribute the rice when the need arose.***

Lieutenant Colonel Ludwig did not believe that the local chiefs could administer such a large undertaking. He suggested that a meeting be held with the four chiefs on 7 September. The battalion commander had lunch that day with the chiefs and proposed that the Marine battalion, through active patrolling, ambushes, and sweep operations, screen the VC from the people, freeing the peasants to harvest their rice. The farmers could keep the rice in their homes and the Marines would try to keep the VC out. The chiefs were agreeable and Ludwig, borrowing from Greek mythology, labeled the operation GOLDEN FLEECE. General Walt cleared the operation with General Thi, the I Corps Com-

*0ne of Ludwig's company commanders was an Australian exchange officer, Captain Michael J. Harris of the New South Wales Light Infantry, who had served with the British forces in Malaya and gladly shared his experiences with the Americans. He suggested the formation of an area security council consisting of the four chiefs, a program which Ludwig later implemented. Ludwig intvw.

***The 9th Marines intelligence summary of l September indicated the significance of Trinh's proposal: 'Hoa Hai village has a population of over 3,000 and has been considered VC controlled territory. If the villagers are now willing to risk possible VC reprisals by refusing to pay the usual rice tax, it would indicate a confidence and firmness heretofore lacking in this locality.'