Marines in December, 40 of the 66 Marines assigned to the combined action company at Phu Bai volunteered to extend their tour with the PFs rather than return to Okinawa with their battalion.9

Marines in the other sectors of I Corps also experimented with the employment of local Vietnamese defense forces. On Ky Ha Peninsula, north of Chu Lai, the local chief, with the cooperation of Lieutenant Colonel Robert J. Perrich's 1st Battalion, 4th Marines, established a self-defense corps in September, composed entirely of local village volunteers. Their duty was to patrol the five hamlets which made up Ky Ha village during the night. On the 25th, members of this force began accompanying Marine patrols in the area. In the sectors of both the 4th and 7th Marines at Chu Lai, PF units were brought into the battalion sectors for introduction and training. At Da Nang, two Regional Force companies' operations were coordinated with the Marine regiments, the 3d and 9th Marines. In addition. both regiments also used PF units during offensive operations to serve as guides and interpreters. Where PF defensive positions were near to those of the Marine battalions, close coordination was maintained for mortar and artillery fires, night ambushes, patrols, and listening posts.

General Walt watched the Marine employment of local forces with intense interest. He realized that the PF soldier had the poorest training and worst equipment of the South Vietnamese armed forces, but he considered him to be a vital link in the process of providing real security for the population. He noted:

He had a signal advantage over all others; he was defending his own home, family, and neighbors. The Popular Force soldier knew every person in his community by face and name; he knew each paddy, field, trail, bush, or bamboo clump, each family shelter, tunnel, and buried rice urn. He knew in most cases the local Viet Cong guerrilla band, and it was not uncommon for him to be related to one or more of them by blood or other family ties.10

During November, the III MAF commander persuaded General Thi to release eight PF platoons at Da Nang to the operational control of the 3d Marine Division. Seven of the PF units were assigned to the airfield defense battalion and the eighth to Lieutenant Colonel Ludwig's 1st Battalion, 9th Marines, operating south of Marble Mountain.11 Marine and PF troops patrolled the defensive perimeters of the airfield area together. Reports of innocent people being detained at the airfield decreased considerably, and the PFs received valuable combat training. On 5 January 1966, General Walt asked General Thi to extend combined action operations between PFs and Marines to all three enclaves, which Thi agreed to do on 28 January.12 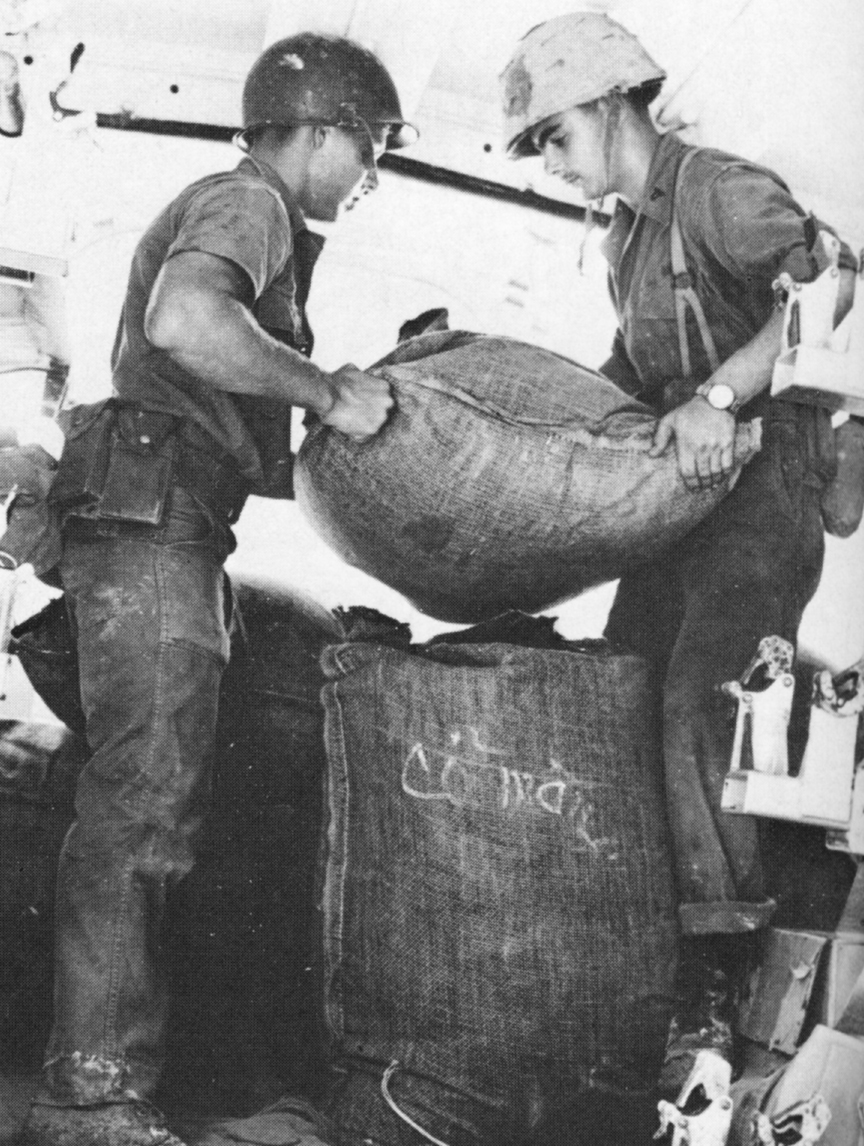 Two Marines from the 1st Battalion, 9th Marines stack newly harvested bags of rice inside a Marine amphibian tractor in Operation GOLDEN FLEECE. The rice is to be taken to a central collection point for safe keeping and marketing.

Protection of the Harvest: GOLDEN FLEECE

The expansion of the 9th Marines TAOR into the populated area south of Da Nang during Operation RICE STRAW coincided with the autumn rice harvest and resulted in another task for the Marines, rice harvesting protection. The most publicized effort involved the 1st Battalion. 9th Marines along the eastern perimeter of the 9th Marines' area of operations.