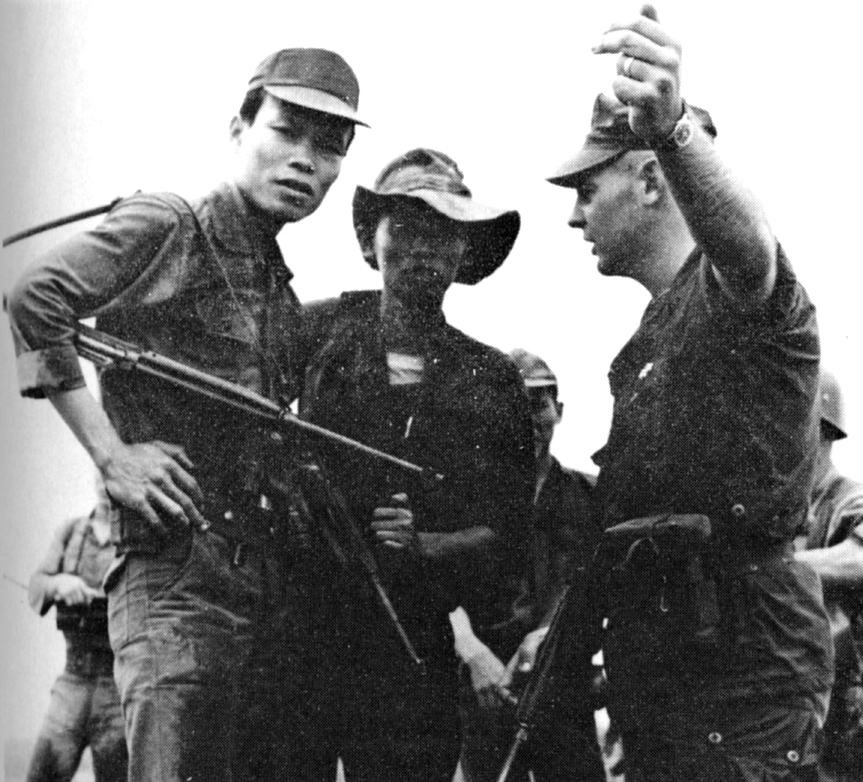 Lieutenant Paul R. Ek {on the right) discusses the situation with a South Vietnamese officer (left). The South Vietnamese soldier in the center with the floppy wide-brim hat is the interpreter.

present operation and the one in which the USMC could make a solid contribution.4

Unlike the Guardia Nacional in Nicaragua or Haitian Gendarmerie, the joint action company was to be a cooperative effort rather than a Marine-officered native constabulary. The first, and perhaps most important, task was the selection of the Marines for the program. All of the Americans were hand-picked by Ek, and, as far as he was concerned, they were the best men available. They were highly motivated volunteers. The Marine lieutenant spent a week teaching his recruits about Vietnamese customs and the political structure in the countryside. The men were to live in the surrounding hamlets and they needed to know their exact place in this society. In Ek's words, they had to know 'whom to call 'sir' and whom to call 'you'.'5

When the school period was over, each of Ek's four Marine squads was assigned to a PF platoon. The Marine squad leader became the platoon commander while the Vietnamese commander became his assistant. A Marine fire team was the nucleus of each combined squad with Marines filling most of the leadership billets, but with Vietnamese counterparts. This relationship existed on the company level as well; Vietnamese Warrant Officer Nyugen Diem Duong was to be Ek's executive officer. The company headquarters included a Marine first sergeant and three Vietnamese radio operators who manned the ARVN radio nets. These nets included the hamlet chief as well as the 3d Battalion's fire direction center. At first, Ek's headquarters served only as an administrative and coordinating center for the activities of each platoon, but, in time, the headquarters controlled company-size operations in which the combined unit operated with Regional Force and ARVN units.

The command structure was flexible. Although Lieutenant Colonel Taylor had operational command, the Vietnamese district chief retained administrative responsibility for the PF. Correspondingly, in each village where the joint action platoons were garrisoned, the village chief kept his administrative civil responsibilities, while the combined force was responsible for military security. A great deal depended on the tact and resourcefulness of each Marine, especially the platoon commander who had to maintain harmonious relations among his subordinates, the village chief, and his PFs.

Ek's concept of operations for the employment of the PF with Marines was patterned on the organization of the VC infrastructure, using "assistance rather than terror to win the people's loyalties." He believed that as the PFs and Marines built their 'infrastructure . . . they would be destroying that of the Viet Cong.' The combined force would have several basic assignments: 'security, counter-intelligence, obtaining the good will of the people .... These formed the spokes of the wheel while training was the hub of the entire program.'6

On l August, the joint action company was formally established and two days later the first platoon made a reconnaissance of its assigned village. During the first week, the platoons entered the villages only during daytime. At first the Marines ignored the villagers and worked solely with the PFs. The Americans had to learn the terrain and local patterns. Each Marine carried a small notebook in which he recorded the daily habits of the people in the hamlets, such as what time the buffalo boys took their animals out to the fields and when the people