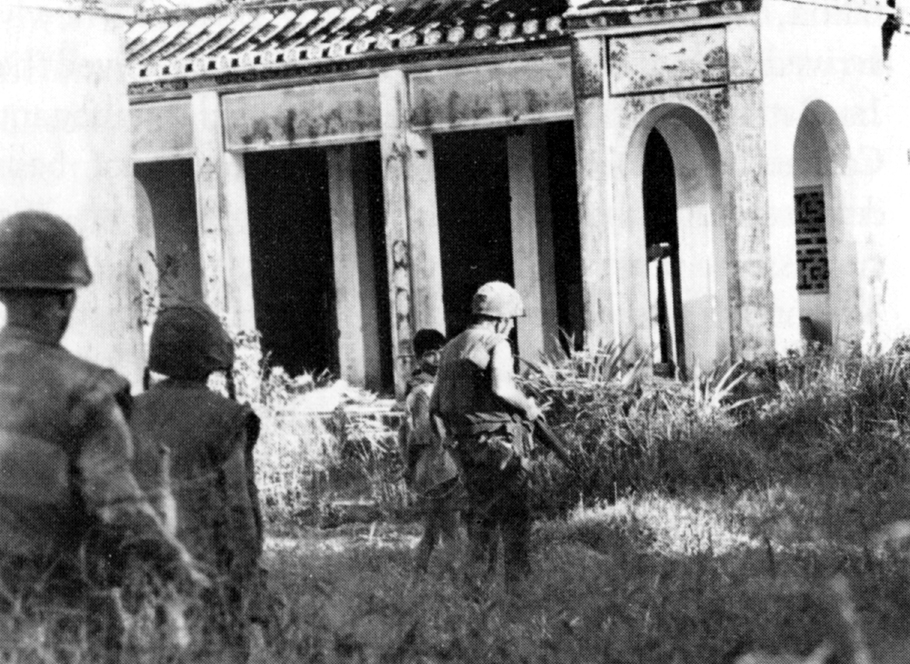 A VC prisoner leads a Marine squad to a weapons cache. The prisoner claims that the VC are using the Buddhist Pagoda in the picture to store their arms.

ferry crossing sites, LAAM sites on mountain peaks, ammunition dumps, supply dumps, and units of the MAW. I arranged for rotation of the war dogs, temporary augmentation from scarce infantry assets to help in night-time guarding or patrolling, or improvement of the physical barriers. I withheld infantry assistance on occasion for our assets were too thin. We had to tell some sailors, soldiers. Marines, even civilians, to 'do the best you can, to be alert.''35

Security coordinators were established at all Marine airfields. The commanding officer of the 9th Marines assumed the additional title of Marble Mountain airfield coordinator with the responsibility of overseeing the defense for the helicopter field. After the October raid, the 3d Engineer Battalion, with the assistance of MAG-16 personnel, built a barrier of minefields and barbed wire.36 Similar measures were taken at the other installations.

Each Marine enclave developed its own procedures for providing internal airfield security. At Da Nang, one infantry battalion provided security; each of its four companies was assigned a defensive area from 2,100-3,400 meters wide. The battalion conducted patrols outside the airfield perimeter to add depth to the Marine defense, as well as to prevent the VC from setting up mortar and recoilless rifle firing positions.37 The Vietnamese Air Force defense sector remained separate from the battalion's area of operations. At Chu Lai, the Marines also assigned one infantry battalion to airfield security, but only two of the battalion's companies were deployed on the airfield perimeter. These two companies were reinforced by two provisional rifle companies composed of personnel from MAG-12, the Seabees, and the 2d LAAM Battalion.38 At Phu Bai, the 3d Battalion, 4th Marines developed the combined action company to deal with the unique situation existing there.

III MAF experimented with several techniques to ensure the security of the major airbases. These included the use of dogs and sophisticated electronic devices. In August, 11 sentry dogs and their Marine handlers arrived at Da Nang from Japan. After three weeks of intensive training, the dogs were assigned to posts at ammunition supply points, LAAM battery sites, and Marble Mountain. In November, some of the dogs accompanied Marine patrols along the airfield perimeter. The Marines learned that the dogs were most effective when employed in remote areas where few people worked or lived. The dogs were extremely valuable at the LAAM battery site on secluded Monkey Mountain, but proved to be unsatisfactory at the ammunition supply point where Marines worked around the clock. The continuous activity at the latter site only confused the animals.39

We had known in the first place that there were always plenty of human beings out there in front of us in the paddies, huts, jungles, and hills. No tricky devices or stunts, however, could help Marines determine friend from foe.40

Even so, the Marines found the devices useful. As one battalion commander explained:

We used the seismic devices in each one of these situations, very successfully so. We shot a few water buffalo and a few dogs . . . [the devices allow] you, of course, to maintain and secure a much greater perimeter with a lot less people.41*

* Colonel Carrington recalled one rather humorous use of the seismic device: '... a senior USMC officer was concerned that sappers might be tunneling under our MAF headquarters. Use of seismic detectors to confirm this was inconclusive, but after resort to bull dozers to dig futilely for the assumed tunnel, I was chatised by another senior USMC officer for allowing destruction of a projected, ceremonial parade ground.' Col George W. Carrington, Jr., Comments on draft MS, dtd 24Nov76 (Vietnam Comment File).