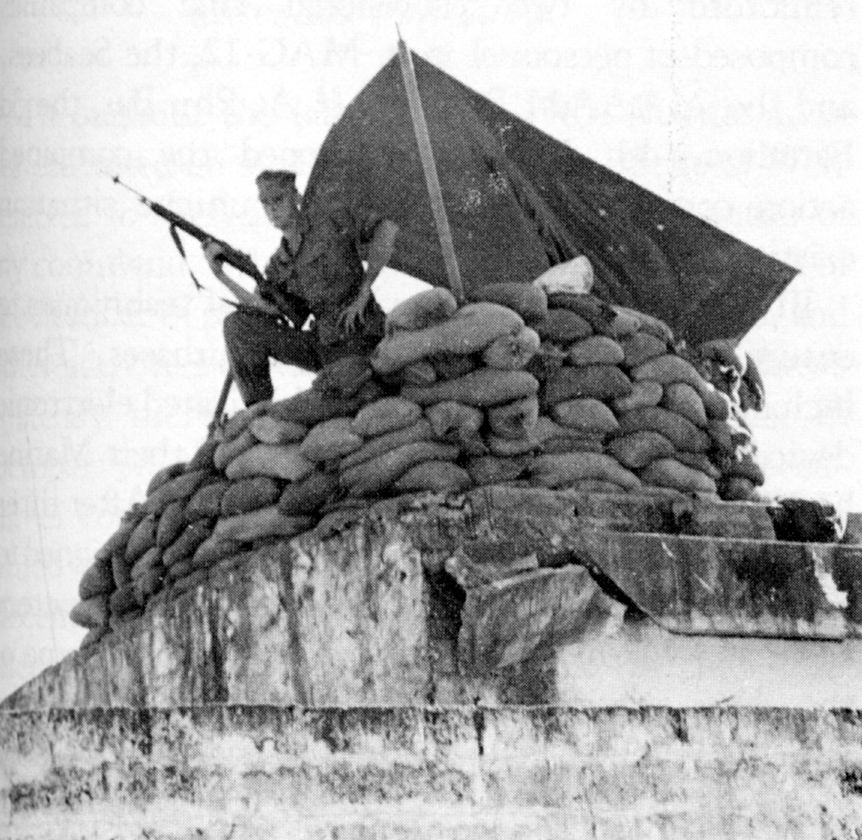 A Marine from the 1st Battalion, 9th Marines mans a defensive position on top of an old French fort in the Marble Mountain area. The Marines used the fort to store supplies.

The VC had planned the operation thoroughly. They hit the critical portions of the perimeter and knew exactly which bunker contained ammunition. American intelligence sources discovered that the VC unit involved in the attack was the R-20 Battalion which had just completed training. The Hill 22 attack was apparently its final training exercise.31*

The main physical security problem of the airfield, other than keeping the Viet Cong out, was overlapping American and Vietnamese authority. There was a heterogeneous mixture of U.S. and Vietnamese units at Da Nang, each responsible for its own internal security. The 41st Fighter Wing, VNAF was responsible for its defensive perimeter, while U.S. Air Police and Vietnamese MPs controlled the main gate. This situation was further complicated when the Marble Mountain Air Facility east of the main airfield opened in September. At Marble Mountain, MAG-16, the Seabees, and support troops provided their own security. The various security forces both at Da Nang and Marble Mountain integrated their efforts as much as possible with the plans of the airfield defense battalion. General Walt exercised 'a sort of presuptive authority over the tenants.''33

Obtaining a dear dedsion for relations between the various commands was a continuing problem. On 4 October, the III MAF staff proposed that General Walt ask ComUSMACV for permission to activate a base defense command to exert 'coordinating authority over the internal security provided by the various commands and units at Da Nang.'34

General Walt expanded the authority of the base defense coordinator and appointed Colonel George W. Carrington to this position in place of Lieutenant Colonel Clark. After the enemy attacks at the end of October, the new coordinator visited the Da Nang airfield tenants to ensure that an integrated defense did exist. He also planned the trace of a fence around the airfield. Carrington's duties also included advising, coordinating, and drawing together the defensive measures of the other two Marine enclaves.

According to Colonel Carrington, his responsibility extended to and:

. . . included field artillery battery positions (but I could not infringe upon command responsibilities of the artillery regimental commander), water points, bridge and

*The enemy battalion also was known as the Doc Lap Battalion. According to General Simmons, it was not ''a new battalion, but one which had just been filled up with new recruits, most from the city of Da Nang, and retrained.'' BGen Edwin H. Simmons, Comments on Shulimson, 'USMC Ops RVN Jul-Dec65,' dtd 12 May 71 (Vietnam Comment File).