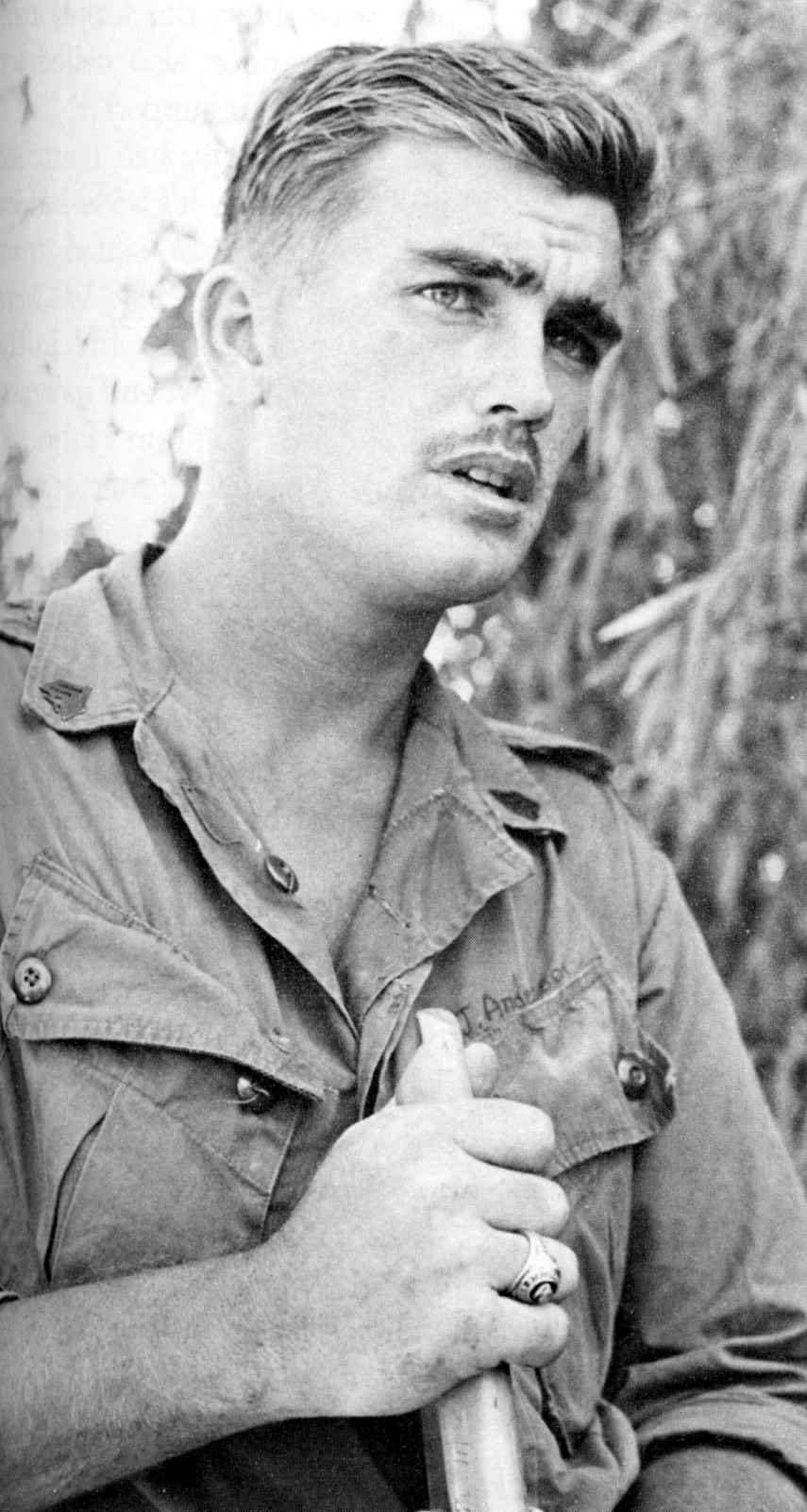 Sergeant John A. Anderson describes his squad's patrol action. His squad was credited with preventing a major attack on the Da Nang Airbase.

site after dark. By 1945 they had established their positions; only 15 minutes later the Marines heard movement along the trail. The squad leader, Sergeant John A. Anderson, ordered his troops to hold fire until the enemy was at pointblank range. Seven VC had passed the site of the most forward Marine before Anderson triggered the ambush. At this moment, the VC were only six to seven feet away from the Marine's M-60 machine gun position. The machine gunner initiated the engagement with a long burst, followed by heavy fire from all the weapons of the rest of the squad. This volley killed all seven VC.22*

The seven dead were only the advance party for a larger enemy force which moved forward to engage the Marines. Sergeant Anderson fired several M-79 rounds at the muzzle flashes of the approaching VC. The firefight continued for another minute, but then the enemy began to disengage. Sergeant Anderson realized that his troops had to get out of the area; he was outnumbered. The squad leader ordered his men to count the dead VC before leaving; they counted 15. The Marines moved out to their battalion's position, but during the return two squad members were wounded by Viet Cong firing from a dike. Anderson called for fire support and after 60 rounds of 81mm mortar fire hit on the enemy position, the VC stopped firing. At first light the next day, 28 October, Company I sent two platoons to search the ambush site more thoroughly. Of the 15 known VC dead only two bodies were found.23

General Walt and his staff believed that Sergeant Anderson's patrol probably had foiled an attack on the airbase. Apparently the patrol had intercepted a VC company from the same unit that carried out the Marble Mountain attack:

This belief is supported by the fact that the company was moving in the direction of the Da Nang base, and time and distance being considered, the time of the attack on the Marble Mountain Air Facility.24

Two days after the airfield attacks, the Viet Cong attempted another probe of the Marine defenses, not at the base area, but against the defensive perimeter on Hill 22, south of the Tuy Loan River, manned by the Marines of Company A, 1st Battalion, 1st Marines. The action began at 0100, 30 October,

*Captain Charles Ward, at the time the 9th Marines S-2, debriefed the Anderson patrol. He recalled that the VC advance party had been preceded by a point element carrying candles and flashlights to give the appearance of villagers returning home. According to Ward, Anderson's men had seen the point men but 'were uncertain as what to do-after all, the men wore villagers' clothing, held lighted candles, and the ambush location was on a well-travelled trail leading to Highway l only 200-250 meters away and was only 100 meters from occupied huts. The question became academic when the main body traipsed into the squad's position. So surprised was Anderson by the unexpected appearance of the column of men on the trail, he almost forgot to give the order to the machine gunner.' Ward concluded his remarks with the observation that 'reportedly this was Sgt Anderson's first combat patrol.' LtCol Charles Ward, Comments on draft MS, dtd 270ct76 (Vietnam Comment File).