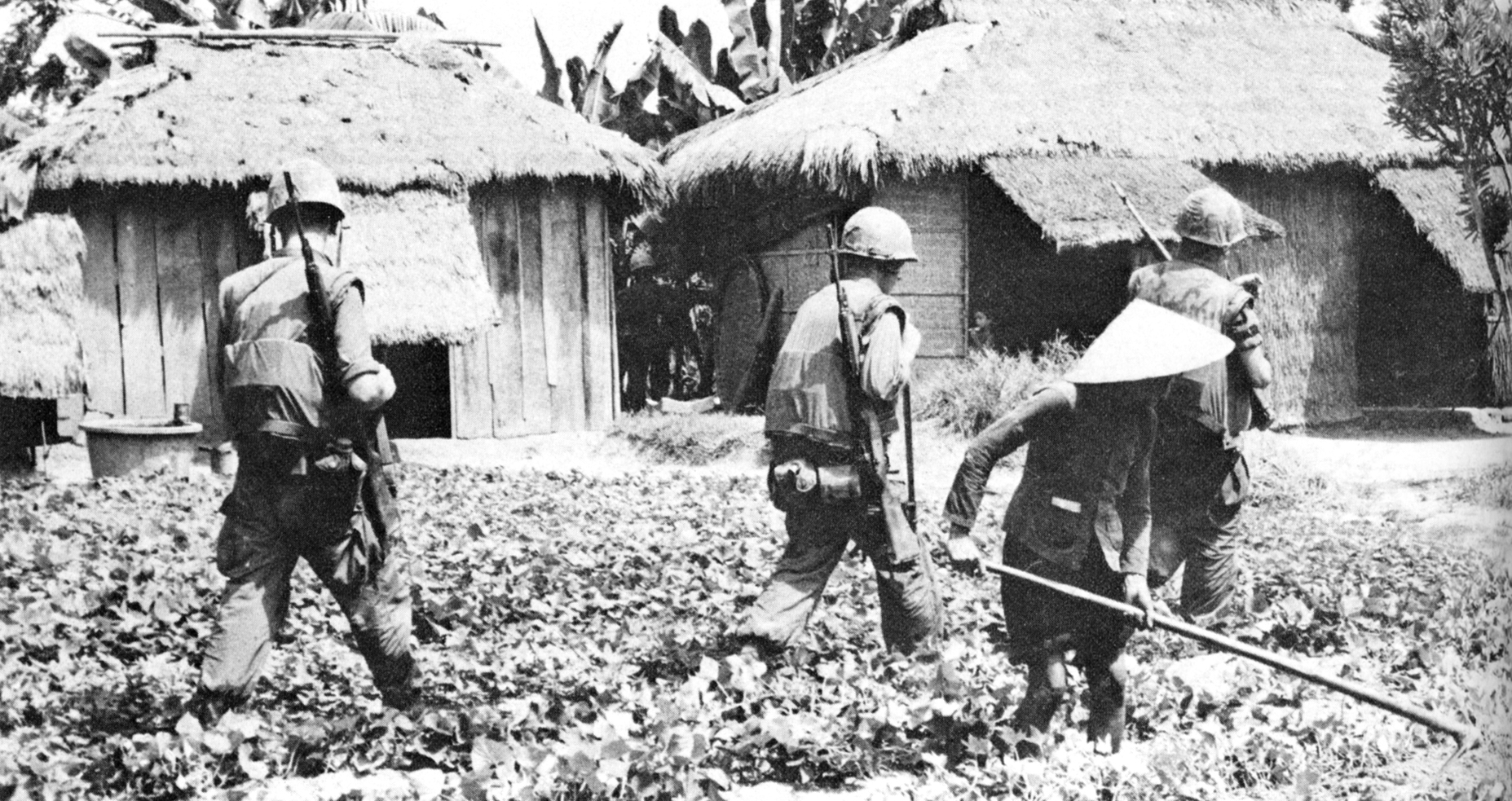 Marines from the 3dBattalion, 9th Marines move through a village south of Da Nang. The Vietnamese farmer continues with his hoeing, apparently ignoring the Marines.

received over 25,000 reinforcements for a total of approximately 45,000 Marine and Navy personnel.

With the buildup, command relationships became increasingly important; any conflict of interest had to be resolved. For III MAF, this applied not only to its association with MACV, but with the U.S. Army in II Corps, civilian and military Vietnamese authorities in I Corps, the U.S. Navy, and the U.S. Air Force's 2d Air Division.

General Walt was well aware of the possible pitfalls that lay before him in this sensitive area. When he split his division staff and established the coordinating headquarters at Chu Lai under General Karch on 5 August, part of the rationale was:

... to anticipate and alleviate actual possible conflicts of interest before irreversible action, plans, or commitments are taken that would adversely affect: A. Another command or commands. B. Relationships with the Vietnamese Government. . . .8

Until August General Walt had dealt with the Vietnamese only in relation to Marine operations, but the 6 August MACV amendment to the III MAF Letter of Instruction also made General Walt the Senior U.S. Advisor to I Corps, responsible for the U. S. military advisory effort in the five northern provinces. The significance of this authority is indicated in the following excerpt pertaining to the responsibilities of the I Corps Advisory Group:

To advise, assist and support the RVN military and para-military units and staffs in all combat, support, and combat service support operations and training; to assist the RVN in developing and maintaining an effective conventional and counter-insurgency military capability; to exercise operational control of all assigned U.S. units; and to perform liaison among U.S., RVN, and international Military Assistance (third country) Force Commanders.9

The influx of large numbers of U.S. Army forces caused General Westmoreland to reexamine the basic command structure within MACV. He told the Joint Chiefs of Staff that he desired the option of placing III MAF under Field Forces, Vietnam if the war escalated to the proportions of the Korean conflict, but saw no advantage to changing the