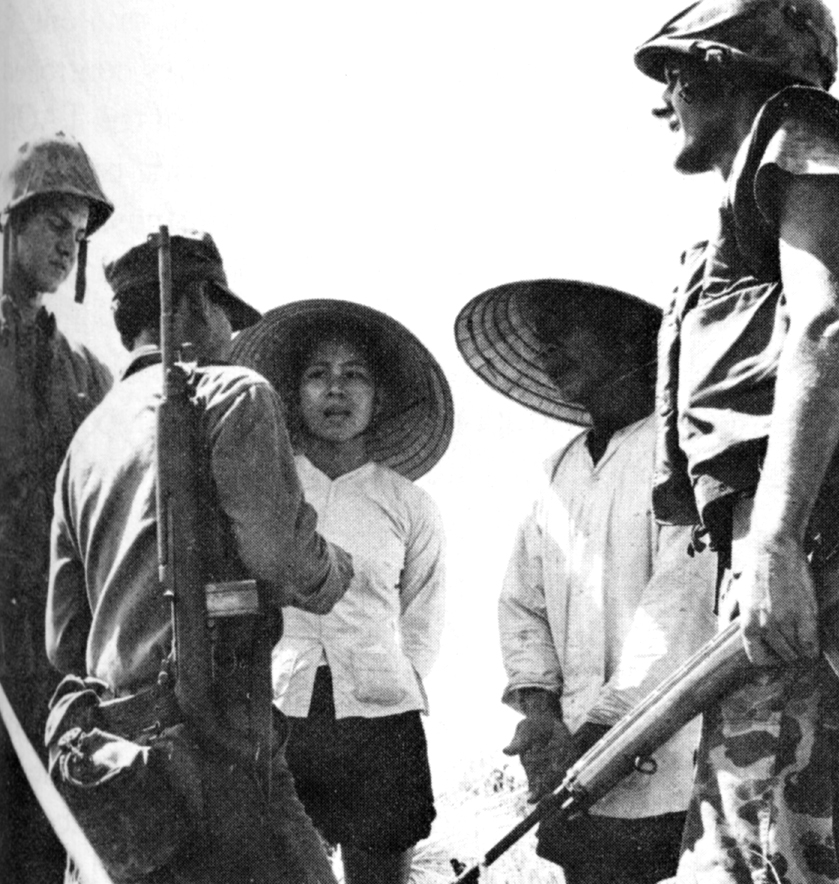 A South Vietnamese interpreter questions a farmer and his wife about the VC as Marines watch. The hamlet is located in the heavily populated area south of Da Nang.

divisions supported by a reinforced Marine aircraft wing to carry out its mission in I Corps. Furthermore , the IIl MAF commander stated that if he were to be responsible for the entire area from Quang Ngai Province to the DMZ, he would need three more battalions.6

These new force requirements would have repercussions throughout the Marine Corps. In August, the Marine Corps was authorized a 30,000-man increase, for a total strength of 223,000, to support the Vietnam effort. By October, HQMC furnished the Secretary of Defense with plans for obtaining another 55,000 Marines to allow for the formation of the 5th Marine Division in California, 18 infantry battalions in Vietnam, and 3 battalions on Okinawa. This plan was approved and funded by the end of the year.7

The end of the battalion rotation between East Pac and West Pac caused the institution of an individual personnel replacement system for all units of III MAF. Under the designator Operation MIX-MASTER, Marines in Vietnam were transferred between units so that everyone in each unit would not have the same overseas tour expiration date. This homogenization process involved thousands of Marines and took place over several months.*

With the termination of the intertheater transplacement system in September 1965, FMFPac immediately began planning for the rotation of battalion landing teams from Vietnam to Okinawa, then to the Seventh Fleet, and back to Vietnam again. This program was designed to allow BLTs to refit and retrain in a non-combat environment where emphasis could be placed on training rather than operations. The intratheater rotation began in November when the new BLT 1/3 relieved the 2d Battalion, 3d Marines at Da Nang. The latter unit

* This process did not always go smoothly. In November 1965, the 9th Marines regimental commander stated that there was a lack of replacements which resulted in a personnel shortage throughout the regiment. 9th Marines ComdC, Nov65, p. 1-1. The following excerpt furnishes an example of how Operation MIXMASTER worked: 'On 19 November, Company E, 2/7 was exchanged with Company A, 1/4 and on 30 November Company A, 1/7 was exchanged with a company from 3/4.' 7th Marines ComdC, Nov65, p. 3. Colonel Nicholas J. Dennis, who at the time commanded the 3d Engineer Battalion, wrote that MIXMASTER 'was a two edged sword for my battalion, We could only infuse with the 7th Engineers and the 1st Engineers. In the case of the 7th, except for 'Charlie' company, the rest had arrived in RVN on the same date. The mixing with the 1st Engineer Battalion was more practical, however, it provided a one on one situation.' Col Nicholas J. Dennis, Comments on draft MS, dtd 3Nov76 (Vietnam Comment File).