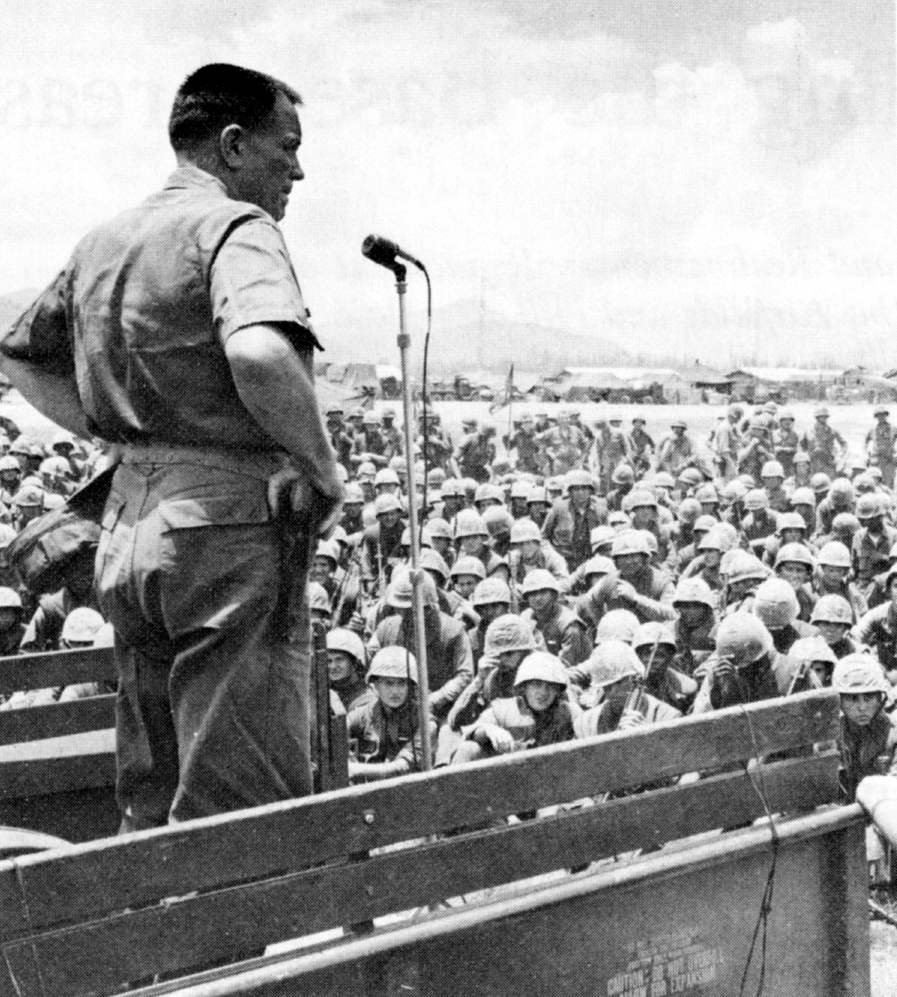 General Walt speaks to the men of the newly arrived 1st Battalion, 1st Marines at Da Nang. The III MAF commander tells the troops: ''We need you here; our job is just beginning.''

this difference in priorities was evident as early as July when MACV required the Marines to report 'Battalion Days in the Field.' Karch remembered that he first heard of this report, 'at the usual morning briefing for General Walt.' When the III MAF commander asked the reasons for the 'disparity of Army versus Marine 'Days in the Field,' the briefing officer explained that battalions engaged in pacification operations were not counted as battalions in the field.'3

General Westmoreland reiterated his emphasis on the big unit war, on 10 December, in a letter to a subordinate commander. He wrote: 'I am increasingly concerned about the fact that we are not engaging the VC with sufficient frequency ... to win the war in Vietnam.' Although relatively satisfied with the American counterguerrilla effort, he believed, 'we have not yet proved that we have mastered the art of finding and destroying major VC forces through sustained campaigns against them in a given area.' The MACV commander recognized the validity of the Marines' concern with pacification, but he wanted General Walt to create a two- or three-battalion force capable of moving quickly into enemy-dominated regions, to join with the ARVN in operations of sufficient size to punish the enemy's big units and disrupt bases and supply caches. In his memoirs. General Westmoreland declared that he had no desire 'to precipitate an interservice imbroglio,' and recognized that:

General Walt had a mission-type order which by custom afforded him considerable leeway in execution. Rather than start a controversy, I chose to issue orders for specific projects that as time passed would gradually get the Marines out of their beachheads.4*

Lieutenant General Krulak claimed that the difference between what was called at the time ' 'the Army Strategy' and 'the Marine Strategy' was more a matter of emphasis than of substance; both formulas were sound. Krulak believed that the 'Army maneuver technique' was correct in the area around Plei Me in the Central Highlands, but observed, 'You cannot shoot anything that moves in the rich area south of Da Nang, where the population runs as high as 1,000 per square mile,' The FMFPac commander argued that in I Corps the enemy was mixed in with the civilian population and 'we have to root him out, and separate him from the people; which is to say, fight a guerrilla/counterinsurgency war, and clean the area up a bit at a time.' In any event, to fight both the big unit war and the war in the enclaves, the Marines needed more men.5

In the summer of 1965, General Walt informed MACV that III MAF required a force of two Marine

* General Westmoreland qualified his views in the following comment: 'There was a recognized difference in the deployment of troops between the I and the II Regions because of terrain, roads, population dispersion, Vietnamese political and psychological considerations. To try to make a big point of a difference in strategy is to take an unreasonable and narrow view .... In the final analyses, the strategy and tactical operations of the war obviously required both pacification and military Main Force units. The degree of emphasis between these two types of operations varied as a function of the local situation. 'The former MACV commander observed 'The I Corps Region was more vulnerable to attack by Main Force units than any other region because of its proximity to North Vietnam.' Gen William C. Westmoreland, Comments on draft MS, dtd 22Jul77 (Vietnam Comment File).