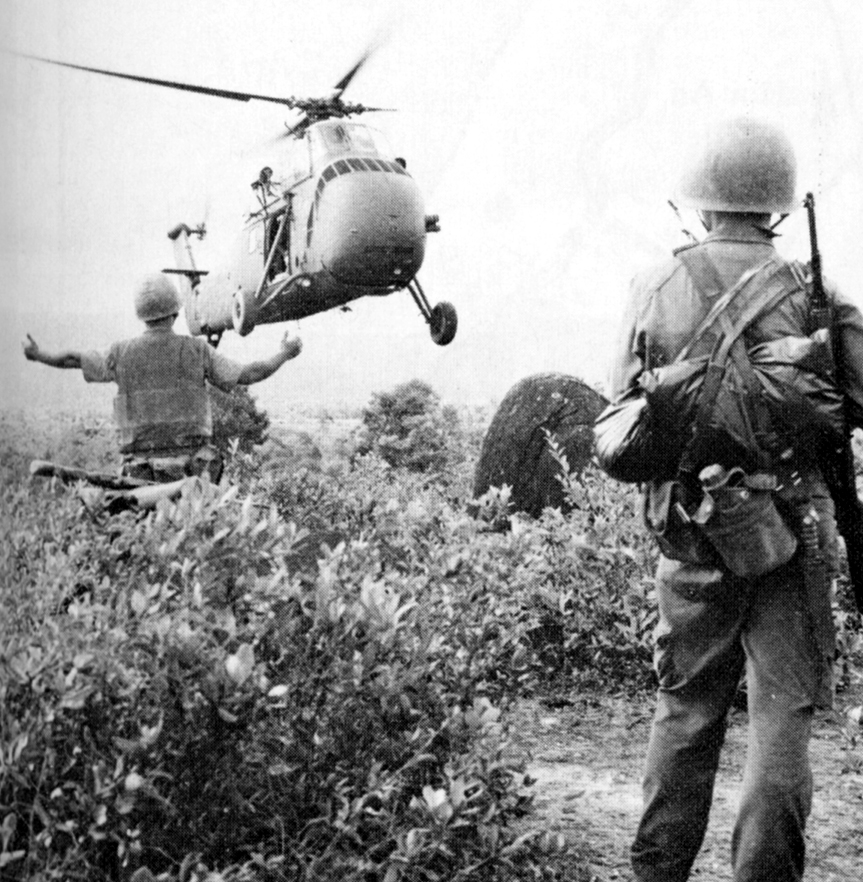 A Marine helicopter brings in supplies to a forward company during Operation HARVEST MOON. The Marine in center of the picture is making landing signals to the pilot.

The two actions at Hiep Duc and Thach Tru typified the enemy's monsoon strategy. Moving during periods of poor weather which hampered air operations, the Communists attacked isolated outposts and then established ambushes to trap any relief forces. At Thach Tru the enemy had miscalculated, but at Hiep Duc, in forcing the ARVN to abandon control there, the 1st VC Regiment was in excellent position to enter the strategic Nui Loc Son Basin, threatening ARVN outposts at Que Son and Viet An.

To counteract this threat, on 17 November General Westmoreland ordered General Walt to hold two battalions on a 12-hour alert so that they could be deployed rapidly as a mobile reserve. Five days later, he issued a new letter of instruction in which he reaffirmed his previous verbal order to Walt that III MAF should 'conduct search and destroy operations against more distant VC base areas to destroy or drive the VC out.'6

At about the same time, General Krulak, though not in the official operational chain-of-command, commented on the need for the Marines to recapture the initiative. General Krulak made several suggestions including the idea of enticing the VC to attack a supposedly weak position which was actually ''loaded for bear.'' The place the general mentioned was Hiep Duc.7

General Walt, concerned about the enemy's growing control in the Nui Loc Son Basin, met with General Thi on 4 December to discuss the mounting threat. According to intelligence reports, the enemy had moved northeast from Hiep Duc and was threatening the ARVN outposts at Que Son and Viet An. Both commanders concurred in the need to launch a sizeable attack against the VC before the enemy unit was able to establish a firm base of operations. The result of this agreement was Operation HARVEST MOON/LIEN KET 18.*

Activation of Task Force DELTA and Planning the Operation

*This operation should not be confused with the rice harvest operations, also named HARVEST MOON, conducted during September-October. These pacification efforts are discussed in Chapter 9.

**At this time there were two assistant division commanders of the 3d Marine Division. General Henderson was stationed at Da Nang while Brigadier General Jonas M. Platt, who had relieved General Karch on 9 November, was assigned to Chu Lai and also acted as base coordinator there.