knock out the enemy antiaircraft emplacements, Colonel O'Connor resumed the troop lift. Although the VC ground forces were converging on the landing zone, 'we landed a superior force in the zone without further opposition.' For the operation, the Marines had employed 30 UH-34s, 17 of which were hit, and 3 badly damaged. One Marine crewman was killed and three others wounded.3

The relief force had its work cut out for it, but with Marine close air support and determined fighting, the ARVN gained the advantage. By the end of the 19th, the South Vietnamese reoccupied Hiep Duc, but the 1st VC Regiment still controlled the critical terrain to the northwest. The two ARVN battalions killed 141 VC and captured 87 weapons while suffering 33 killed and 73 wounded themselves. American advisors with the ARVN estimated that Marine air support had accounted for another 300 VC killed. 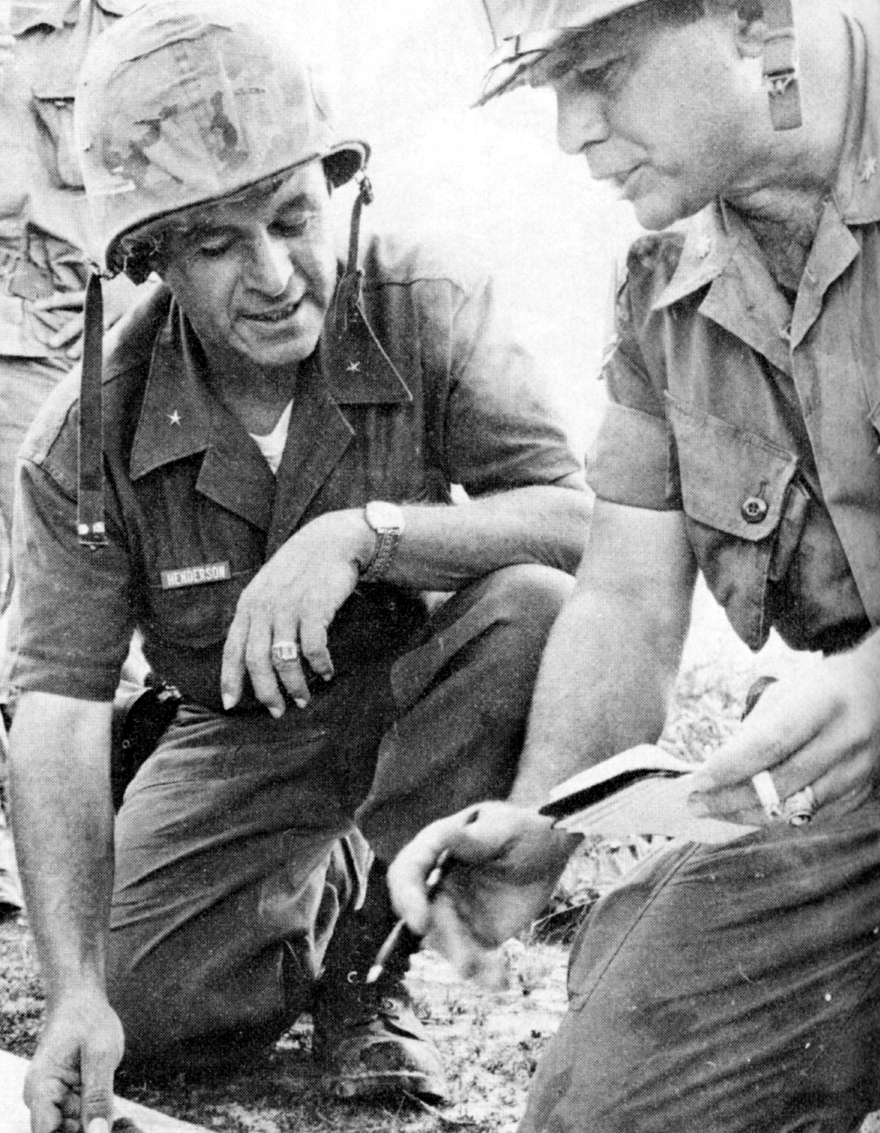 General Thi now had to make a major decision: either regarrison the district capital with the ARVN force, or abandon the outpost. In spite of rainy weather and poor flying conditions. Lieutenant Colonel Bodley's 3d Battalion, 7th Marines at Chu Lai was ready to reinforce the ARVN should the need arise. The Communists actually decided the issue when they attempted to overrun an isolated outpost, Thach Tru, in southern I Corps.* Forced to commit more forces to this action, Thi ordered the two ARVN battalions withdrawn from Hiep Duc.4

Instead of reinforcing Hiep Duc, Bodley's battalion was committed to the Thach Tru engagement, 16 miles south of Quang Ngai. The attacking force was identified as North Vietnamese, the 18th NVA Regiment reinforced by the 45th VC Heavy Weapons Battalion. Although the Marines arrived on 22 November, the day after the attack had begun, their help was never really needed. The defenders, two RF companies and the 37th ARVN Ranger Battalion, repulsed the attack, inflicting heavy casualties on the enemy. Dense cloud cover over the area hampered dose air support, but two U. S. destroyers provided much needed fire support during the engagement. Two U.S. Marines advisors to the 2d ARVN Division, flying over the battlefield in 0-1 B observation aircraft, directed the 5-inch guns of the O'Brien (DD 725) and Bache (DD 470) against enemy formations. The ARVN Ranger commander credited these two ships with breaking the back of the enemy attack.5 During the three-day battle, the ARVN, supported by naval gunfire and Marine air, killed 175 enemy and captured 136 weapons. Bodley's force accounted for another three enemy dead and took 17 prisoners. Unfortunately, one Marine UH-34D and its four crew members were lost during a troop lift sortie. The 3d Battalion, 7th Marines was helilifted back to Chu Lai on the 24th, after being relieved by the llth ARVN Ranger Battalion at Thach Tru.

*Advance elements of Bodley's 3d Battalion were actually helilifted to Hiep Duc area on 21 November, but the bad weather prevented the unit from landing. The battalion had planned to start Operation QUICK FIRE that day in the Hiep Duc region in support of the ARVN's ongoing Operation QUYET THANG 485; the Marine plans were cancelled the next day when the M Battalion, 7th Marines went to Thach Tru.