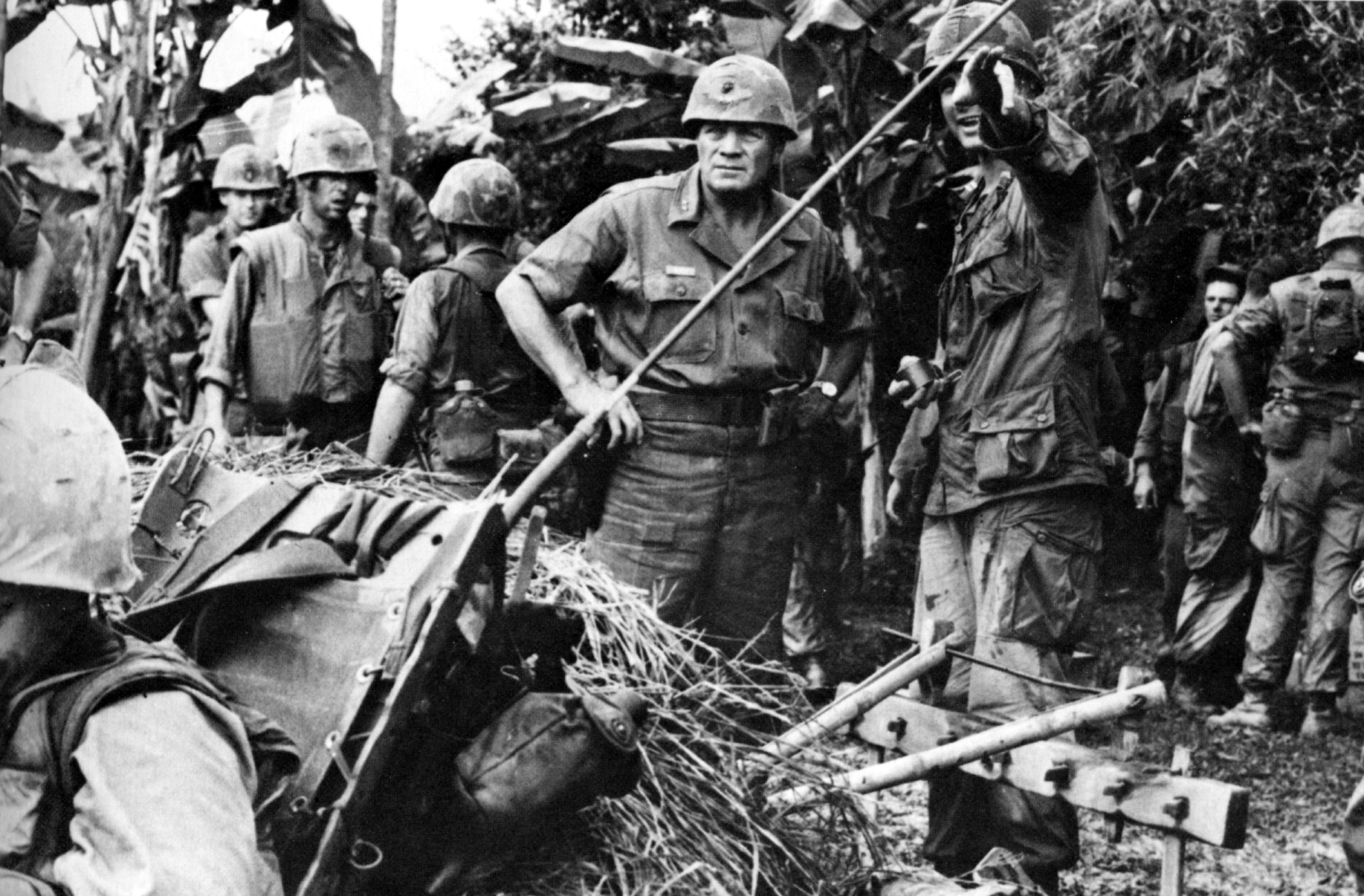 Captain Richard E. Theer, Commanding Officer, Company B, 2d Battalion, 7th Marines, describes the battle situation to General Walt. The scene is near the base of Hill 407 in the Que Son Valley.

about 4,000 meters east of Hiep Duc with some peaks over 200 meters high. Unknown to the allies, the VC had emplaced 12.7mm machine gun positions on this hill mass which dominated the landing zone.

The enemy gunners allowed the first helicopters to land on 18 November, but then opened fire on the following waves.* Colonel O'Connor, who was airborne with Lieutenant Colonel Zitnik over Hiep Duc during the landing attempt, stated that, "they [the enemy gunners] were actually firing down on the landing helicopters.'' Several of the aircraft were hit and, according to O'Connor, "It became obvious that we had to knock out those guns on the peaks or suffer unacceptable helicopter losses." Colonel O'Connor recalled:

I stopped the oncoming helicopter flights, and directed them to circle their positions about 3 miles east of the hill mass. Then, A-4's and F-4's from MAG 12 and MAG 11 began a thorough neutralization of gun positions on the hill under control of some Army light fixed-wing observation aircraft.

We took a risk in stopping the helicopter lift, because we had landed less than a company in the zone. Enemy ground movement was observed after the first helicopter had landed. They [the enemy troops] began to displace from their original positions north and west of the paddy we had scouted, and moved into the village toward the landing zone. Bob Zitnik and I were fired upon while circling Hiep Duc observing these movements. But we had to give the jets a good clear shot at the gun positions, and they did their job.2

After a 20-minute wait for the Marine jets to

*It was later learned that the intense and well directed 12.7mm antiaircraft .fire was delivered by the NVA 195th [also known as the 9th] Antiaircraft Battalion. This North Vietnamese unit had been formed from elements of the NVA 308th Division early in the spring of 1965, and moved south via the Ho Chi Minh Trail through Laos and arrived in South Vietnam during September. It had joined the 1st VC Regiment in the Que Son Hiep Duc Region on 20 October 1965. III MAF ComdC, Dec65.