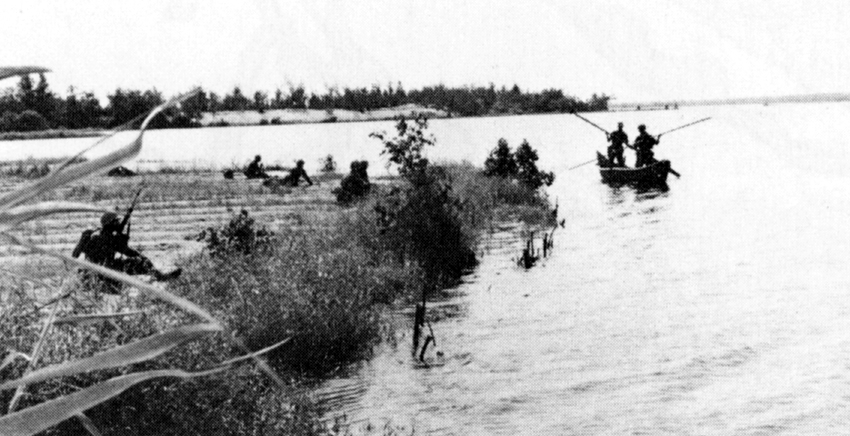 Marines from the 2d Battalion, 7th Marines use a Vietnamese fishing boat to cross a river during BLUE MARLIN. Other Marines wait their turn to cross.

There were still many positive results of the operation. The Marines had entered an area where the inhabitants had long been sympathetic to the enemy. Since the Marines indicated that they would be frequent visitors, the ARVN decided to establish a permanent outpost on the southern bank of the Tra Bong. In addition, Marine firepower may have hurt the VC more than the statistics of the operation indicated. Marine aircraft hit several enemy craft on the Tra Bong River and a Marine artillery mission, fired at a suspected VC concentration area, produced secondary explosions.

The last large operation initiated in November was the two-phased BLUE MARLIN. This offensive was the outgrowth of a realignment of forces and an abundance of available amphibious shipping, a combination which offered an excellent opportunity to conduct search and clear operations between the coast and Route l in the 50-mile littoral corridor between Da Nang and Chu Lai. Responding to a U.S. appeal for troop assistance from its SEATO allies, the South Korean government dispatched its famed ''Tiger Division'' to Vietnam's Binh Dinh Province in II CTZ during October. This deployment of forces freed Lieutenant Colonel Utter's BLT 2/7 from its mission at Qui Nhon. General Walt decided to return Utter's unit to its parent regiment at Chu Lai and to move the 3d Battalion, 3d Marines from Chu Lai to its parent regiment at Da Nang. Walt received approval from Seventh Fleet to use the ships of Amphibious Squadron 5 (PhibRon-5) which were then in Korean waters embarking the 'Tiger' troops. He then designated Colonel Thell H. Fisher, the deputy chief of staff of III MAF, as the BLUE MARLIN landing force commander and sent him to Pusan, Korea. On the voyage southward, Colonel Fisher and Captain William J. Maddocks, USN, the amphibious squadron commander, completed the preliminary planning for the operation.

After the Korean troops had relieved Lieutenant Colonel Utter's BLT 2/7 on 4 November, the task group sailed northward to Chu Lai where the 3d South Vietnamese Marine Battalion also boarded the ships. On 10 November, the 190th birthday of the U.S. Marine Corps, the combined USMC/VNMC force* landed according to plan 15 miles north of Chu Lai. Helicopters from Colonel Johnson's MAG-36 ferried the South Vietnamese inland from the beach to landing zones west of Route l. The combined force then swept southward along both sides of the road. BLUE MARLIN I ended two days later when the allies reached the Chu Lai TAOR. Except for numerous booby traps, no other enemy presence was encountered.

The second phase of BLUE MARLIN followed a similar pattern. After Phase I ended, the amphibious task group returned to Chu Lai where Lieutenant Colonel William H. Lanagan, Jr.'s 3d Battalion, 3d Marines embarked on the ships. Lieutenant Colonel Lanagan had assumed command of the battalion five days after Lieutenant Colonel Muir's death during an operation south of Da Nang.** On 16 November, the battalion landed over beaches 22 miles south of Da Nang, and pushed north. The area of operations for Lanagan's force was a corridor bounded by the Truong Giang River to the west, the Cua Dai River

*Major Richard E. Romine accompanied the South Vietnamese Marines in BLUE MARLIN. He recalled: 'We had a bad time getting on the beach with the Amtracs due to the extremely rough surf.... we landed north of Tam Ky and swept towards Chu Lai.' On 10 November, he remembered that he celebrated the Marine Corps Birthday with 'a beer that an H-34 pilot dropped to me that evening.' Romine added, '... although enemy contact was very light, the snipers seemed to single me out from the Vietnamese Marines I was near.' LtCol Richard E. Romine, Comments on draft MS, dtd 250ct76 (Vietnam Comment File).

** The 3d Battalion, 3d Marines had flown from Chu Lai to Da Nang on 10 September to support a 9th Marines operation. On the early morning of 11 September, Lieutenant Colonel Muir stepped on a 155mm shell rigged as a mine and was killed with his radio operator. Four other Marines were wounded in the blast. This occurred on Hill 55, a strategically located elevation 8,000 meters south of the Cau Do. The 3d Battalion returned to Chu Lai on 14 September. In the interim. Major Comer, the executive officer, was the acting battalion commander until relieved by Lieutenant Colonel Lanagan. See Chapter 8.